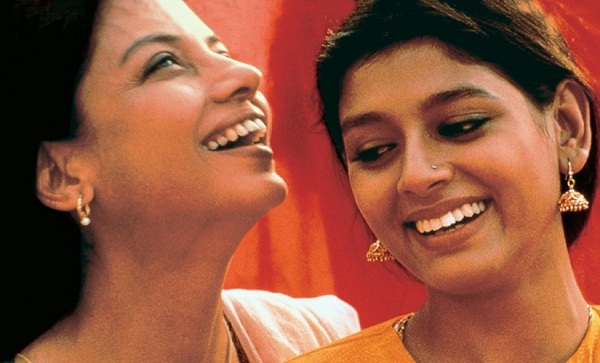 Not Just Bollywood: 2019 opens tomorrow with a rare screening of Deepa Mehta‘s trilogy of films addressing political and social issues in Indian society. Deepa Mehta is an example of one of the important ‘diasporic’ or ‘exilic’ directors who have offered radical perspectives on Indian cinema and society through their films. In this respect she joins other important filmmakers such as Mira Nair, Shekhar Kapur and Gurinder Chadha. I don’t want to discuss the differences between ‘exilic’ and ‘diasporic’ here, only to recognise that for various reasons these filmmakers have been trained in and worked in other film industries/film cultures but have travelled to India to make Indian films with Indian stories. In the selection of six women who have directed films in India for this mini-season, three of the others, Dar Gai, Anu Menon and Rohena Gera, have similar experiences of training and living outside India.

Deepa Mehta was born in Amritsar before moving as a child to Delhi and eventually graduating from Delhi university. In 1973 she emigrated to Canada with her husband, a Canadian documentary filmmaker. In Canada Mehta developed a career in documentary before moving into TV drama and eventually feature film production. In 1991 she directed a a Toronto-set film Sam and Me which featured an Indian family and the actors Om Puri, Kulbhushan Kharbanda and Javed Jaffrey as cast members. The latter two of this trio would become important in the Elements Trilogy when Mehta travelled to India to make Fire set in Delhi in 1995. Kulbhushan Kharbanda also featured in Earth made in 1998 and Water, completed in 2005. This last film, proved to be so controversial as a production that it had to be delayed and re-started, losing some of the other original cast members.

Deepa Mehta discusses the background to the trilogy in this Canadian interview which looks back on the selection of Water as the Canadian entry for the Foreign Language Oscar in 2007:

She explains that she didn’t expect that the films would become controversial and that what attracted her were the stories themselves. She saw them as women’s stories, stories about women’s choices or rather the lack of choices that women in India have. The stories are set in different time periods and in different parts of India, but all three stories explore social issues still relevant today. Mehta suggests that she now sees that these kinds of stories are controversial in societies experiencing ‘hyper-nationalism’ because people are encouraged to attack anything that threatens a sense of a set national culture, they feel uncomfortable about anything that wants to question or set up a ‘conversation’ about what has happened and what might need to be changed. The interview was in 2017 in Canada and she refers to Trump’s America but it could be Modi’s India or Johnson’s UK right now, so she’s right to say that the stories are universal.

Fire, the first screening on Wednesday 11th September, offers a story about a young woman Sita (Nandita Das) who travels to Delhi to marry Jatin (Javed Jaffrey) but soon discovers that he has a mistress and no interest in his bride. Sita finds herself in a household of two brothers who share a shop. Jatin rents out videos and Ashok (Kulbhushan Kharbanda) runs a grocery business. Ashok, for different reasons shuns his wife Radha (Shabana Azmi) and the two wives find themselves caring for Ashok’s elderly bed-ridden mother with the servant Mundu. The two women turn to each other for a real relationship. Deepa Mehta wrote the script herself but Wikipedia references Gayatri Gopinath as the source for a suggestion that the story is inspired by Ismat Chughtai‘s 1942 story, Lihaaf (The Quilt). Fire is a Canadian film made as a co-production with India. The story and the cast are Indian but the cinematographer Giles Nuttgens is British and editor Barry Farrell is Canadian – both also work in the US. On the other hand the music is by A R Rahman and other creative posts are held by Indians. The film’s dialogue is mostly in English. This choice is not that unusual in India and places the film in relation to some examples of what was known as ‘middle cinema’ in the 1980s in India and what is sometimes included under the heading of ‘parallel cinema’. The film to some extent ‘crossed over’ to a wider potential audience in India because of the subject content. Lesbian relationships were rare in Indian cinema at this point and this attracted protestors and attempts to shut down cinemas screening the film. One aspect of the narrative that was not so accessible for audiences outside India was the ‘play’ with the traditional depictions of Radha and Sita in the Hindu epics of Mahabharata and Ramayana. Mehta appears to have possibly reversed the qualities of the two traditional characters.

Earth carried the title 1947: Earth in India, a direct indicator of its setting during the final weeks leading up to Partition. This story is an adaptation of a biographical novel by Bapsi Sidhwa first published in the UK in 1988 as Ice Candy Man and the later in the US (1991) and India (1992) as Cracking India. Lenny is an 8 year-old girl in a Lahore Parsi family. She is recovering from polio and his very close to Shanta a young Hindu woman from South India employed as the household maid but seen by Lenny as her ‘Ayah’. Shanta is played by Nandita Das and the voiceover of the adult Lenny is delivered as narration at certain points by Shabana Azmi. The production is in many ways similar to Fire (so there is the same mix of Indian and European/Canadian creative personnel), but there are two differences that might make it more meaningful for Indian audiences (on top of the fact that the subject matter is so important in the history of India). First, the central character of the Ice Candy Man is played by Aamir Khan, already a leading Bollywood star and second, the dialogue features Hindi, Urdu and Gujarati with English only spoken by Lenny and her parents. The film was India’s Foreign Language Oscar nomination in 1999.

The Parsi family are close to the British in Lahore and are not part of the growing rift between the Muslim, Hindu and Sikh communities in the city. The narrative cleverly weaves a story of romance through the events with Shanta being the object of desire for both the Muslim Ice Candy man and the Hindu masseur. The film must have felt personal for Deepa Mehta who was born in Amritsar only a few years after Partition and she must have heard the stories of anguish for those displaced into either Indian or Pakistani Punjab after the line was drawn and so many were killed. The trains arriving in stations full of those killed after attacks had come from or were going to cities like Amritsar or Lahore. I think Earth may be the film that affected me most in the trilogy. In a sense there is nothing ‘controversial’ in the film, except that it stirs memories and introduces younger viewers to the calamity that was the British partition of India. It does, however, also relate to the contemporary ‘communalism’ clashes in some parts of India.

Water, by contrast, was taken to be a direct challenge to Hindu traditions and appeared at a time when the ‘Religious Right’ was growing in strength in India. Deepa Mehta wrote this story herself with some dialogue written by Anurag Kashyap. Later Bapsi Sidhwa collaborated with Mehta again and wrote a ‘novelisation’ of the film. The film should have been shot in 2000 in Varanasi as the location (as Benares) in 1938 where a young child is taken to a house of widows after the death of her adult husband. Hindu traditions decreed that widows must live away from the outside world. The protests turned violent and the film’s set by the ghats was destroyed. A deeply upset director was offered permission to shoot in neighbouring states where the BJP was not in power such as West Bengal and Bihar, but she decided to postpone the shoot. In interviews she has said that she was too angry to continue and that shooting a film fuelled by anger would damage her artistic vision. Eventually she decided to move the shoot to Sri Lanka five years later. This worked well for the production overall but she lost the opportunity to cast Shabana Azmi and Nandita Das for a third time. The younger and older women’s roles went to Lisa Ray and Seema Biswas. Lisa Ray had appeared in Deepa Mehta’s earlier Canadian film Bollywood/Hollywood (2002) and was just beginning to attract attention from Indian filmmakers. Seema Biswas is probably best known to UK audiences as the lead performer in Shekhar Kapur’s Bandit Queen (India-UK 1994).

The narrative involves a meeting between the child widow and a law student follower of Gandhi. This is Narayan played by John Abraham from Kerala who, like Lisa Ray, had been a leading fashion model and was only just established as an unusual leading man in Hindi cinema. But if Lisa Ray and John Abraham raised a few eyebrows in India, the veteran star Waheeda Rahman playing Narayan’s mother was a re-assuring presence.

I wrote about encountering Water on its UK release in an early posting on this blog. I don’t want to repeat those points here and I may have different responses now but the post is worth visiting, partly to follow the links to other writers at the time. As the interview above indicates, Water was a big hit in Canada and is seen by many as Deepa Mehta’s greatest achievement. Its reception in India was more mixed but it had champions as well as detractors. It will be interesting to see what the audience at HOME makes of the film today when contemporary films have become much more explicit and challenging about the abuse directed at women in India which is so deeply rooted in the society. Having recently watched Article 15 and The Incessant Fear of Rape I’m sorry not to be able to attend the HOME screening of Water on Wednesday 18 September and gauge the reaction.

The trilogy is a major achievement by Deepa Mehta and this is a timely screening for the three films.