In 2012 a young woman was gang-raped while travelling on a private bus in Delhi and her friend was beaten. All the six men on the bus, including the driver were involved in the rape and beatings. The incident and the trial that followed created a media storm in India and internationally. The Incessant Fear of Rape is the second film from the team that made Tikli and Laxmi Bomb (India 2017), a film which was much admired when it was shown at festivals in the UK in 2018. It dealt with sex workers who set up a female co-operative as a protection against abuse and exploitation. The new film, again written and directed by Aditya Kripalani and co-produced by Sweta Chhabria, is not directly about the 2012 gang rape incident but instead explores how a group of women might respond to the constant threat of rape they face travelling in the Delhi region.

It is significant that the narrative is set in Delhi which as a city region has grown extremely quickly to become the ‘National Capital Territory of India’ and the second largest urban area in the world with 26 million residents. It rivals Mumbai as symbolic of the ‘New India’ with the ‘satellite city’ of Gurgaon where the women live and the headquarters of Fortune 500 companies. All of this means that many workers find themselves commuting for long periods across the city region. Kripalani’s film sees four women who find themselves in a ‘female only’ taxi struggling to make the journey home one evening when the traffic congestion is particularly bad. 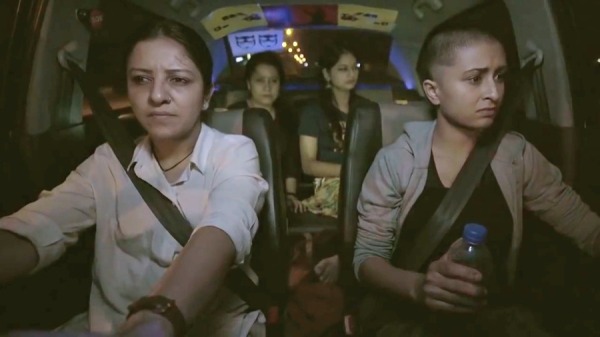 In the taxi, from left Shagun driving, in the back Vibha and Shaila and, in the passenger seat, Chitra

The driver, Shaila (Kritika Pande) is the young owner of a taxi company who finds herself driving tonight but who is soon ousted from the driver’s role by the aggressive police officer Shagun (Sonal Joshi) who claims she knows a better route. In the back are Vibha (Shalini Vatsa), employed as a ‘social media consultant’, and Chitra (Chitrangada Chakraborty) who teaches martial arts classes for women. With her closely cropped hair, it took me a while to recognise this lead player from Tikli and Laxmi Bomb. The women don’t know each other but they are soon chatting about, among other things, forms of feminism, and when they decide to stop at a roadside bar/café because the traffic is so bad, Shagun tells the others about her first encounter with a violent man in her police work. At their outdoor table a man in leathers on a motorbike leers at Chitra and makes a nuisance of himself around the four women. Later, the women find themselves on a lonely road where the same man (played by Vinay Sharma) re-appears, riding close to them and shouting. Chitra loses her temper and manages to knock him off his bike. Soon the four women have a ‘captive’. What will they do with him?

The women have already discussed the fear of rape and how men don’t understand what rape means and what it means to be fearful on the streets at night – or in buses and taxis. They quickly determine to teach this man a lesson. Shagun knows about some empty premises and they lock him up in a metal cabinet. I won’t spoil any more of the narrative pleasures about how the plot develops but I do want to discuss ideas about genre and narrative structure. There are four women in the car who don’t know each other and who each respond differently to the situation. We learn most about Vibha. She is introduced at the beginning of the film arriving for work on a Metro train. In a clever title sequence we see her framed under signage indicating the ‘Women Only’ carriage on the train and later aggressively smoking two cigarettes as she looks out over the city. On the soundtrack is a rock song with some English lyrics I couldn’t quite work out but they relate in some way to the narrative. Vibha recognises something in Chitra’s behaviour and invites her home after they have locked up the man. We will learn about Vibha’s back story in some detail and later we will learn about Chitra too. (Vibha’s story is told in flashback introduced in an elliptical way). Only Shaila will remain without a back story. Her role, in generic terms, is to be the one who has to be ‘taught’ and convinced that what the other three women plan to do is thought out and ‘justified’ as a response to male violence. In a way she stands in for us, the audience. 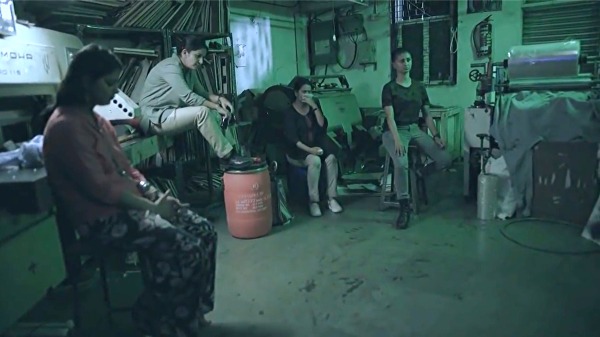 The women in the print shop contemplating their next step

Once the man is locked up, the generic elements of a different kind of film come to the fore. Now we have a prisoner and four potential gaolers. I was impressed by the script at this point and the way that a certain kind of ‘training programme’ was developed. Although I haven’t watched any examples, I remember the cycle of ‘torture porn’ horror films such as the Saw films and I wondered if the women would inflict increasing forms of physical pain on the man. But their plans are more sophisticated and involve breaking him down psychologically. To some extent this draws on ideas about BDSM. Rape is about power rather than sexual drive and the women want the man to understand this so they use humiliation and link it to gender roles. They discuss how men in India still think of women only in three ways: women must ‘dress to look hot’, ‘cook well’ and ‘be fuckable’. (I think the film’s Hindi title refers to this sexist language.) This might well apply to male ideas everywhere but India does seem particularly mired in this form of sexism. The recent film Article 15 (2019) focused on sexual violence in rural Uttar Pradesh and linked it casteism, but The Incessant Fear of Rape takes place in the National Capital Territory and involves the ‘New Women’ of India. The women want to ‘break’ their captive and to publicise the lesson they are giving. I won’t give away the ending which is in some ways shocking, but on reflection makes some sense after I read about the Delhi bus gang rape in 2012. The Incessant Fear of Rape is a disturbing narrative – as it should be. The women’s fear is understandable but their actions might be considered excessive in relation to what the man did and they conjure up ideas about vigilantism and revenge which aren’t lawful. What do we make of the moral questions about their actions alongside our thoughts about the social evils of rape? 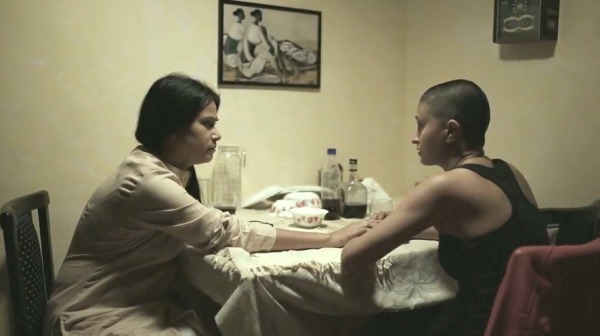 Vibha and Chitra after they have taken the man captive

I did the film disturbing to watch but it certainly made me think about rape in new ways and overall I thought it was an example of how a different kind of ‘social’ film could expose the issue and engage an audience. But how is it as a ‘film’? It’s low budget and classifiable as an ‘Indian Independent’. I don’t think the film has been released to cinemas in India but it is available on Netflix and that’s how I accessed it in the UK. Since I don’t have a Netflix account I had to watch it at a friend’s house. One weakness in the film, which may have been attributable to how the Netflix signal was received, was the poor sound quality. I had difficulty hearing the English dialogue used by some of the women and the music didn’t come across well, especially the bass notes in the guitar track which ran through several sequences. Aditi Sharma’s camerawork, following on from Tikli and Laxmi Bomb, uses mainly ‘available light’ and works to represent the harsh environments. The empty print shop is sometimes bathed in different single colours. The mise en scène of Vibha’s apartment offers us artworks, a shelf of books and film posters. I recognised a poster for Shyam Benegal’s Mandi (1983), a parallel film starring Shabana Azmi and Smita Patil. Vibha is cine-literate and Aditya Kripalani was an FTII graduate. He is also a novelist and the eclectic selection of popular fiction and biographies on Vibha’s shelves made me think about where my images of Gurgaon and ‘New India’ came from and I think they are literary, for instance from Chetan Baghat or Aravind Adiga novels. Chitra’s apartment has another display of artworks and the lives of all four women are quickly sketched out in a series of montages.

The Incessant Fear of Rape is a raw, vital film about a serious issue in the ‘New India’. It deserves a wide audience and a thorough discussion of its ideas.