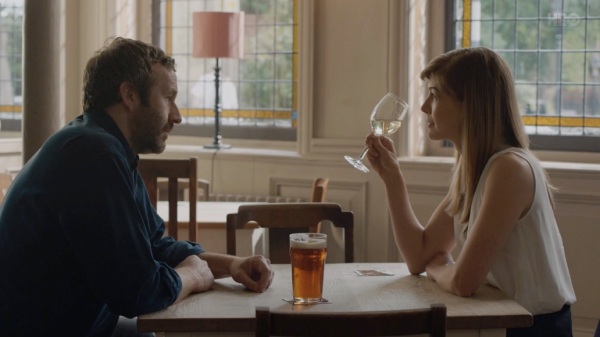 State of the Union is what now appears to be called ‘short form narrative TV’ and as such it represents, alongside the resurgence of ‘long form TV drama’ (aka serial narratives), the new TV world of VOD. Ten episodes of approx. ten minutes each tell the story of Tom and Louise, a middle-class couple in London with two sons and a wobbly marriage. The episodes are broadcast one per week but all ten were made available on BBC iPlayer immediately and many viewers watched several or all episodes at once.

I think this is probably what some might call ‘Marmite TV’ – audiences might love or hate the programme because of the specific metropolitan middle-class setting. (For non-UK readers, ‘Marmite’ is a yeast-based salty spread, enjoyed by some and loathed by others.) This kind of response is understandable but State of the Union is certainly a high-class product. The script is by Nick Hornby, the successful novelist who has now become one of the most successful UK-based screenwriters in international cinema. The director is Stephen Frears who is arguably the most successful British director of his generation over a long career in TV and film, both in the UK and in Hollywood. The two stars are Rosamund Pike and Chris O’Dowd, both again internationally successful TV and film stars. The 100 minute narrative could perhaps have become a cinema film except for the restrictions of the format and it is this observation that interests me.

Tom and Louise have decided to see a marriage guidance counsellor once a week to try to sort out their difficulties. They meet at lunchtime in a quiet pub where they nurse a pint of bitter for him and a glass of white wine for her. We experience 10 minutes of their chat before they visit the counsellor who lives opposite the pub. The camera rarely moves out of the pub. For most of the time it is just two people talking, joshing and scoring points off each other. How does Frears keep us interested in the talk, apart from relying on his two brilliant actors? The cinematography by Mike Eley is inventive, finding new angles and compositions. Mostly ‘over the shoulder shots’ or shot-reverse-shot, I was intrigued by some of the unbalanced compositions and I almost cheered when the couple found their usual table occupied and had to resort to a sofa, requiring a completely different camera set-up. 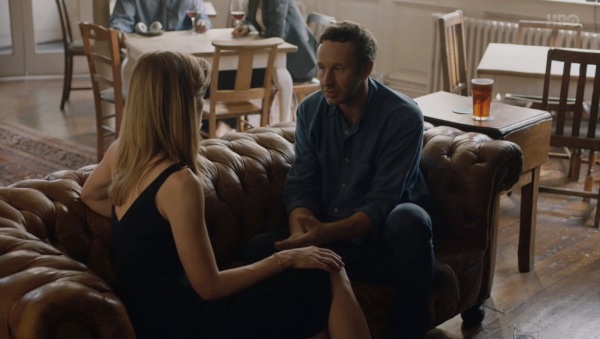 The sofa forces a new composition 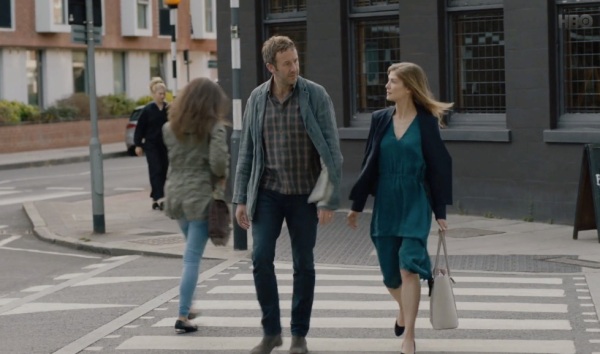 One of the few scenes outside the pub

The other noticeable feature is the impact of costume design. Louise wears a different outfit for each meeting. She works in the NHS and generally she wears sensible tops and a long loose skirt. It’s summer so she doesn’t need a top coat. When on one occasion she wears a version of the classic ‘litle black dress’ we know something has happened. Tom is a freelance writer and we aren’t surprised to see him wearing more or less the same clothes each time (or perhaps we simply don’t notice what he wears?). When he too changes his appearance more dramatically it makes a real impact. Like Mike Eley, Irish costume designer Consolata Boyle is a long-term collaborator with a host of British (and Irish) film and TV directors. It’s interesting too that the pub setting is open and airy rather than expressionistic. No booths, dark corners and none of the classic features of a gothic West End boozer – nothing to distract us from the two characters and their conversation. 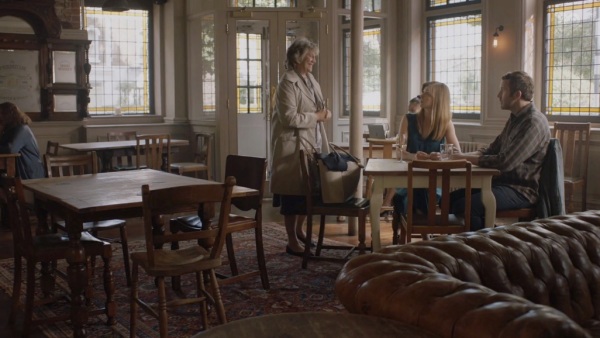 I’m not saying anything about the content of the chat apart from that there are a couple of surreal exchanges. Chris O’Dowd is a past master at this kind of thing as seen in the classic sit-com the IT Crowd. Rosamund Pike gives as good as she gets and sometimes is very funny. Working slightly against her screen persona she also delivers some earthy lines about their married sex life.

If this kind of production brings Stephen Frears back into TV (where he made several excellent TV movies in the 1970s/80s, notably the breakout international hit My Beautiful Laundrette in 1985), I’m all for the new format. I note that State of the Union has already been shown in the US and has won ‘Primetime Emmys’ for the two leads. However, I wonder if future productions will attract such a starry combination of cast and crew?

The generally good showing of this comedy at the UK box office (over £3 million after 3 weeks) indicates the strength of a new cycle of TV-film sitcom adaptations. The cycle was kick-started by the phenomenal success of The Inbetweeners (2011) followed by Mrs Brown’s Boys D’Movie (2014) and The Inbetweeners 2 (2014). In the Loop (2009) is also a link as a ‘spin-off from the TV series In the Thick of It. The last time a cycle like this was evident was back in the 1970s as the old UK studio system was on its last legs.

What We Did On Our Holiday is slightly different in re-casting the central characters, but to many audiences in the UK the new film is a big-screen excursion for writers Andy Hamilton and Guy Jenkins and their creation of Outnumbered. The television show featured the relationship between a middle-class couple and their three children, each of whom in a different way were able to out-think their parents. The young actors were allowed to improvise on set, making the confusion of their scripted parents more believable. Since the characters have now grown up (the series began in 2007) they would need to be re-cast by definition but the first question the new film raises is the replacement of Claire Skinner and Hugh Dennis by Rosamund Pike and David Tennant. The simple answer is possibly that the parents have to be younger as well as the children, but I did feel that Tennant, a fine actor and a star TV performer, was not well-cast in the film. Rosamund Pike copes better and she has now got genuine film presence rather than a TV profile. There has been some evidence of Tennant’s legion of fans complaining that he doesn’t feature enough in the narrative – which inevitably perhaps focuses on the three children.

The children are the central issue for many audiences and critics. On a crude level, the children are either irritating smartarses or totally believable as bright kids confronting the world with questions and logical responses. I’m in the latter camp but it isn’t difficult to find plenty of disgruntled critics who can’t stand the children. My impression is that the children in the feature film improvise less than in the TV version. Perhaps because they are less familiar they also seem to me to be slightly less ‘extreme’ in their performances, certainly I found them ‘softer’. They are younger and now there are two girls and a boy, reversing the TV casting. I thought all three gave excellent performances which is a credit to Hamilton and Jenkin who haven’t directed for the cinema before.

The film’s plot sees Tennant and Pike as Doug and Abi, a couple in London in the process of living in separate houses and divorcing each other – but not yet explaining their plans to their children or to the rest of the family. Now they must travel to the Highlands for Doug’s father’s 75th birthday. Played by Billy Connolly, Gordy McLeod has cancer and this might be his last birthday. The birthday party is being hosted by Doug’s brother Gavin (Ben Miller) who is the ‘successful’ son with a large income and a big house ‘on the company’.

The main action takes place on the day of the party – a huge affair with a marquee in the grounds and a hundred plus guests. Grandad takes the three kids to his favourite spot on the beach to escape the preparations and the tone of the film changes slightly. What happens next seems to have surprised, even shocked some audiences but seemed to be well-handled to me.

Much of the last third of the narrative depends on the setting near Gairloch on the North West coast of Scotland. The huge skies, the beauty of the landscape and the hordes of midgies plus the isolation and local mythologies all point to that aspect of Scottish film culture that is always prone to ‘tartanry’. Because of this, it is tempting to link the film to Local Hero, The Wicker Man etc. The film is part-funded by Creative Scotland and I hope it encourages tourism but I don’t think it delves into Scottish stereotypes too much. Instead there is a focus on the tabloid media, reminding us of Hamilton and Jenkin’s first big hit, the sitcom Drop the Dead Donkey (sorely missed – what could that programme have done with social media culture?).

Billy Connolly is restrained and very funny and Amelia Bulmore is affective as Gavin’s depressed wife. The strong supporting cast also includes Annette Crosbie and Celia Imrie. There is some cod philosophising, but overall I found the film to be good entertainment. I laughed, I cried and I left the cinema satisfied. What more can you ask?