Bill’s family watches the Coronation on their first TV

‘Queen & Country’ as a title is a reference to British military ideologies about patriotism and ‘service’ to the monarchy and the establishment. Written and directed by John Boorman the film is the belated sequel to Boorman’s 1987 film Hope and Glory that proved to be both a commercial and critical hit. Twenty-seven years is a long gap between the titles with a whole generation of new cinemagoers probably unaware of the earlier film. Both films are autobiographical to a certain extent. In Hope and Glory the central character, like Boorman himself in 1942, is nine years old. In the sequel he is eighteen and about to be called up for National Service in 1951. I’ve written about National Service in some detail in a recent post on The Bofors Gun (1968). Queen & Country was initially welcomed as probably the last film to be released by John Boorman and he duly gave interviews to festival reporters and critics. However the film didn’t fully live up to expectations at the box office and later commentators took against the film. I wonder if the setting of the story and in particular the unique cultural context of Britain in the early 1950s was just not understood by audiences, especially outside the UK? But actually the UK/Irish market was not even its strongest box office territory in Europe where the French market prevailed. Part of this failure might have been because the film screened at Cannes and was acquired by Artificial Eye in the UK, best known as an arthouse distributor. I enjoyed the film very much but I can see that it presented problems to distributors. 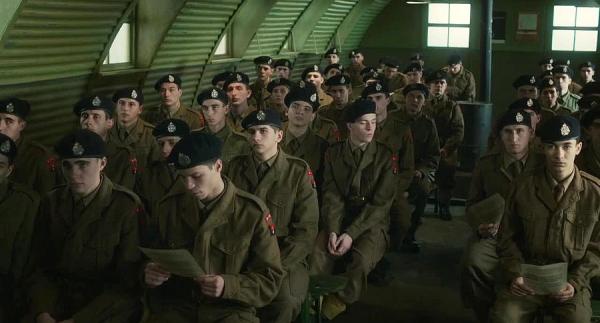 The new conscripts at the start of their National Service

John Boorman has had a long and eventful career. He made an initial breakthrough in UK television before directing his first feature film, the pop vehicle Catch Us If You Can featuring the then very successful singles band the Dave Clark Five. The film worked well enough to enable Boorman to move to Hollywood where he made three features that catapulted him into an international standing as a brave and innovative director: Point Blank (1967), Hell in the Pacific (1968) and Deliverance (1972). Meanwhile, he had bought a house in Ireland where he has been based ever since. From his new Irish base in County Wicklow he made Zardoz (1974) and Excalibur in 1981. In between he returned to Hollywood to make Exorcist II: The Heretic (1977), a film which seems to have offended many and didn’t make money as far as I’m aware. Boorman remained a director capable of raising finance for several further features, including the successful Irish crime film The General in 1998 with Brendan Gleeson and Adrian Dunbar. He also wrote about film. Before he became a filmmaker he had been a reviewer and in 1992 he became the co-founder and editor of Faber & Faber’s long-running series Projections: Film-makers on Film-making. Hope and Glory had been by then a rare British-based production as Boorman preferred making films in what he saw as exotic and interesting locations. The London location of Hope and Glory was personal for Boorman, broadly nostalgic for some audiences and an accessible child’s perspective on the ‘war at home’ for others. Queen & Country had by June 2015 (when the film was released in the UK) become more of a historical drama, looking back at a time less remembered/well-known. 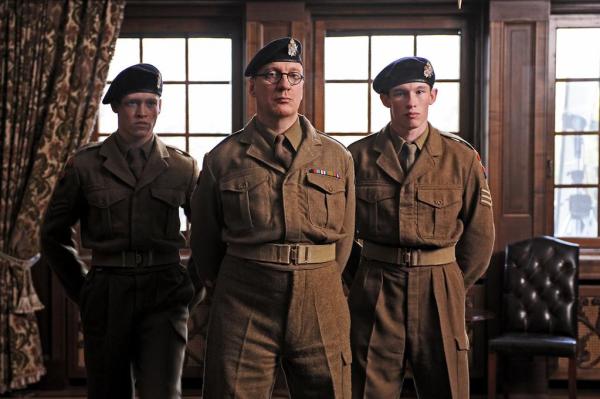 In late 1951 Boorman’s alter ego, Bill (Callum Turner) is called up for his National Service and immediately bonds with another new conscript Percy (Caleb Landry Jones). Together they will have an eventful time over the next two years, despite never leaving Southern England. Bill is a bright lad, more than capable of coping with the Army’s procedures without losing his sense of independent thought. Percy is more of a tearaway. Both young men represent a challenge to the Army’s procedures designed to train young men to take orders without question. The narrative weaves together separate strands involving Bill’s pursuit of the beautiful but mysterious young woman (played by Tamsin Egerton) he has seen across the river from his house each morning and Bill and Percy’s ongoing battle with Sergeant Major Bradley (David Thewlis). The social context for these stories is Bill’s family life in their house on an island in the Thames near Shepperton and the national events of the Korean War, the death of King George VI and the televised Coronation of Elizabeth II. The national context is crucial and Boorman himself has spoken about it in various interviews (especially in Sight & Sound July 2015) and in his memoir Adventures of a Suburban Boy (2003). In 1951 The post-war Labour government lost an election in which it still won the popular vote but the Conservatives won most seats. The new Government under the wartime leader Winston Churchill faced the prospect of fighting three separate wars in Korea as part of a United Nations force and in colonial conflicts in Malaya and Kenya. In each of these conflicts it would be necessary to use National Service conscripts like Bill.

Boorman has spoken about the generational differences that became apparent in the UK at this time and how they were crystallised in the National Service experience. The generation who had fought the war were still prepared to try to hold on to the Empire which was already crumbling. In Aldershot the conflict is between Bill and Percy as National Service youths and Sergeant Major Bradley (David Thewliss). After Basic Training, Bill and Percy are selected as Instructors and promoted to Sergeant (presumably instructors had to be at least sergeants). They are supposed to teach the new conscripts how to type but Bill in particular attempts to subvert the Army’s ideology with the remarks he makes to his ‘students’. This does not go down well with Bradley. Bill and Percy also become involved with Private Redmond, a ‘skiver’ who has avoided posting abroad by feigning various medical conditions. Redmond is a generic character in many military narratives involving conscription and is here played by the Irish comic actor Pat Shortt, a popular figure in Irish film and TV. In his Sight & Sound review (July 2015), Philip Kemp suggests that Queen & Country is something of an ‘episodic clutter’ reminiscent of ‘an army sitcom series’. In one sense I agree and the ongoing battle between Redmond and Bradley is a reminder of Granada’s The Army Game which ran on ITV between 1957 and 1961 and which is part of the National Service cycle of films. Meanwhile at home and with both the mystery woman and the two nurses that Bill and Percy meet, the generation gap is explored in different ways. Bill is not very enthusiastic when his father buys a TV set to watch the Coronation in June 1953. 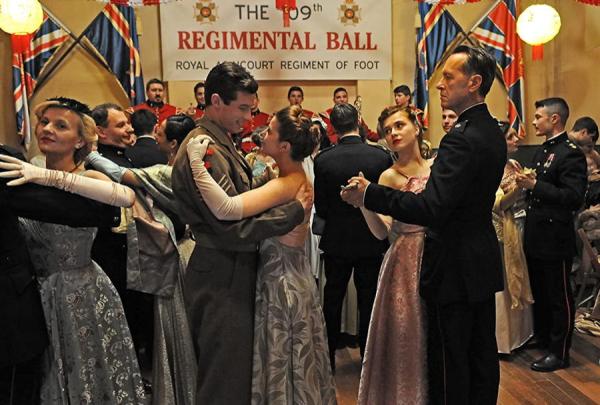 Bill dances with one of the nurses, Sophie (Aimee-Ffion Edwards) at a regimental dance. The other nurse, Peggy (Miriam Rizea) is with Major Cross (Richard E. Grant).

Queen & Country is mostly comedic in terms of the ‘army sit-com’, more like a romantic comedy drama/sexual awakening involving the mystery woman and the two nurses and a family melodrama back on Bill’s island home. However, it becomes much darker towards the end of the narrative, suggesting perhaps that Bill learns a great deal from his National Service experiences. The film worked very well for me, but then it should. It’s difficult to to work out what audiences without the historical background might make of it. At times the comedy is almost farcical, but it is carried through with conviction. Note the name of the regiment in the image above, the RARF, the Royal Agincourt Regiment of Foot. (A name which made me think of Carry On . . . Up the Khyber (1968).) But perhaps the the biggest mistake is the casting of Caleb Landry Jones as Percy. The Texan is now a significant actor in Hollywood, but I don’t think he was in 2014. He looks like he could be English but his accent in the film is all over the place and in the image above where he and Callum Turner are meant to be standing ‘at ease’ in the CO’s office, everything about his stance is wrong. As a generic character in comedy about young men, he is fine but as a significant figure in Boorman’s complex presentation of time and place he is ‘out of place’.

But despite this problem, Boorman displays his skill in many scenes and he works his cinephilia into the narrative which starts and ends with a filming sequence by the Thames at Shepperton. Later Bill will take his date to see Kurosawa’s Rashomon. I thought Callum Turner was excellent as the Boorman alter ego and Tamsin Egerton and David Thewlis should also be singled out. Vanessa Kirby makes the most of the small part of Bill’s sister returning from Canada. Queen & Country is widely available. I watched it on BFI Player but it is on many other streamers to rent or buy as well. John Boorman is one of the best British directors of the last 50 years and I must now re-watch some of the earlier films. Here’s the US trailer: