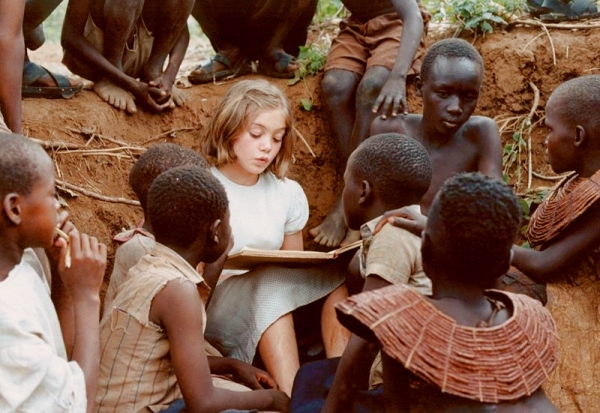 Nowhere in Africa is an engrossing film and it is no surprise that it won the Foreign Language Film Oscar in 2002. It is adapted from an autobiographical novel by Stefanie Zweig in which she explores her childhood experience of arriving in Kenya in 1938. On the Region 2 DVD Zweig says that one of the features of the film that she appreciated most was the representation of rural Africa. She felt that writer-director Caroline Link had captured the beauty that she had experienced as a child without resorting to the simply picturesque or exotic (“no lions or leopards”). This is an important observation which rings true. The film raises a number of unanswered questions but in respect of its images it is certainly one of the best European perspectives on Africa in the mid 20th century.

1938. Walter Redlich (Merab Ninidze), a successful lawyer in Hesse, has left Germany and taken a job as farm manager in Kenya. He fears the rise of the Nazis and as a (non-practising) Jew thinks it wise to leave his comfortable middle-class existence for rural Africa. Stricken with malaria he has arranged for his wife and small daughter to join him. Jettel (Juliane Köhler) enjoys her comfortable life and ignores her husband’s plea to bring useful items. 8 year-old Regina is less happy in Germany and immediately takes to Africa and especially to her father’s cook Owuor who has used local knowledge to care for Walter during his bout of malaria. When war breaks Walter is interned by the British and Jettel and Regina lose their home but with the help of Nairobi’s Jewish community solutions are found and the family are soon together again on a different farm. The film follows the family up until their departure from Kenya in 1947 when they return to Germany. The drama comes from the different experiences of each member of the family as well as the relationships between them (and with Owuor and the local Pokot people). The fifth major character is Süsskind, another German Jewish man who migrated earlier than Walter and who helps the Redlich family at various times. 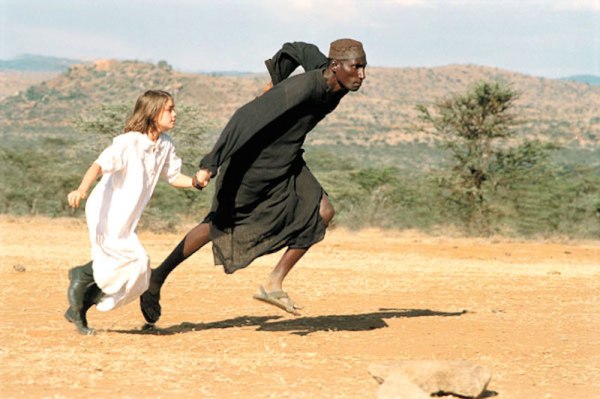 The narrative is constructed in retrospect by Regina as she travels back to Germany in 1947. The film begins and ends with her voiceover. The three central characters each represent a different approach to the problems of migration. Walter is the rationalist (though he also claims to be an idealist). They had to leave. He doesn’t want to be a farmer but he’ll buckle down. The war changes him – he joins the British Army in Kenya and he uses the demobilisation scheme to get the family back to Germany. Jettel follows a classic Hollywood ‘journey’. Initially she finds it hard to adjust and her middle-class, European stance makes it difficult for her to get on with Owuor and the local people. Eventually though she becomes a farmer and is reluctant to return. Jettel’s story might have made a conventional melodrama. Regina ‘blossoms’ in Africa. She is the narrator of the story and she mixes not only with Owuor but also the local children. It is not until she attends an English boarding school in Nairobi that she feels ‘alien’. Since she makes the transition over nine years from little girl to bright teenager it is more difficult to assess how she feels in the closing scenes (since she now understands more about her parents’ marriage). 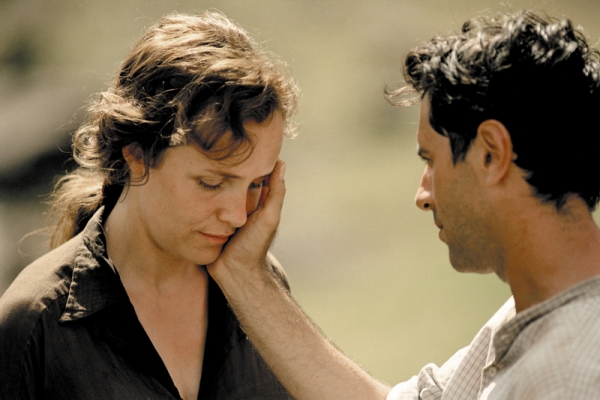 Jettel and Walter during one of their reconciliations

Nowhere in Africa is a long film (140 mins) and some critics/reviewers have argued that the narrative drive is lost in the final third. There is something in this charge and sometimes the film does feel more like a memoir of a period than a filmic narrative in the mainstream sense. This might also take something away from those unanswered questions.

Nowhere in Africa was commercially successful in Germany ($10 million) and in North America ($6 million). The third biggest territory was Spain (over $2 million) and then Australia. In the UK, Box Office Mojo quotes $400,00 – not bad for a subtitled film, but half the Australian total and not much more than Argentina ($370,000). The first three UK reviews of the film that I found each see the film as underwhelming, simplistic, ‘safe’ etc. These reviews also tend to be inaccurate as well as missing some of the interesting angles. Perhaps the film suffered from comparisons – to Polanski’s The Pianist and Out of Africa, the Isaak Dinesen story that became a Hollywood melodrama with Meryl Streep? I’m not sure that either is a useful comparison, though Out of Africa does share several important elements. The reviews don’t really pick up the colonial melodrama issues that interest me. In several ways, the most interesting link would be to the Claire Denis film Chocolat (France/WGer/Cameroon 1988) – which also features the daughter of middle-class Europeans and their family servants.

Kenya has always been prominent in British cinema’s relationship with colonial Africa – and with the whole ideological terrain of colonialism, independence struggles and post-colonialism. Putting aside the specific case of South Africa, Kenya was perhaps the most attractive colony for European settlement, based to some extent on plantation development for tea, coffee and maize. The climate and the fertility in the ‘White Highlands’ of Central Kenya meant that they were reserved for white settlers by the colonial administrations – displacing local farmers and reducing grazing land for nomadic peoples. The settlers were mainly middle-class British, but also other Europeans and in UK popular culture their lifestyle was seen as hedonistic in the ‘Happy Valley’ region – later represented in the film White Mischief (UK 1987). The exclusivity in this region also helped to encourage local political independence movements which began to be active in the 1920s and grew in strength immediately after 1945. In the early 1950s the same area became an important location for British adventure films including Where No Vultures Fly (1951) – which dealt with game poaching and the struggle to establish national parks in Kenya. 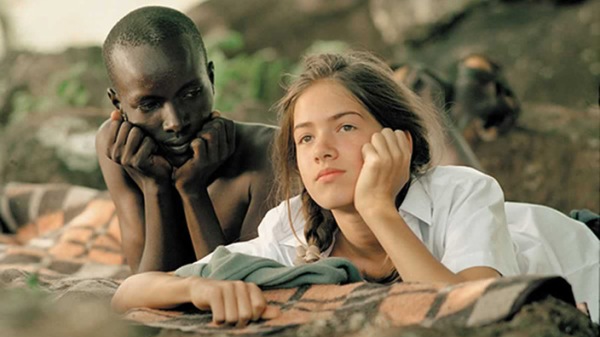 Nowhere in Africa is interesting in not really featuring the British upper middle-class settlers and instead offering more practical settler-farmers with few graces. One farmer has to use the cook as a translator in talking to Walter as he has learned some Swahili but not English. When Jettel and Regina are interred in a hotel in Nairobi, however, it is a very upmarket establishment and their other experiences include meeting the Nairobi Jewish community, who are British and middle-class, and experiencing the boarding school. When they do begin effective farming, the crop is maize which was mainly introduced by the British as a cash crop. The simmering political unrest is not directly represented – though arguably it is still there. One of the telling lines of dialogue is from an old man who Walter meets when he starts work on the second farm. The man says he knows the land and can help – he’s known it for 40 years. He then says that “if someone steals your cow and eats it, you can forget it. But if they steal your land it is still there and you’ll never forget it”. He is prepared to help because Walter is not a ‘bwana’ who seeks to get rich by stealing more land. This is one of the scenes in which Regina is not present and therefore one she must invent from what she understands happened to her parents. The whole narrative is narrated from her perspective – which was a child’s and then a teenager’s. She was at that age less interested in politics and more in love with the country and its (native) peoples.

I would recommend Nowhere in Africa for several reasons, including excellent performances by the principals. It offers a different European perspective on Africa, one that is still eurocentric but is less trapped in the coloniser-colonised binary. It’s also a film about a girl growing up that to my ageing male eye seems to be authentic and well worth engaging with. I’d also be interested in a film which told the parents’ story in more detail. I found the film in the bargain bin at Fopp (£3 for a DVD) and I consider it money well spent.