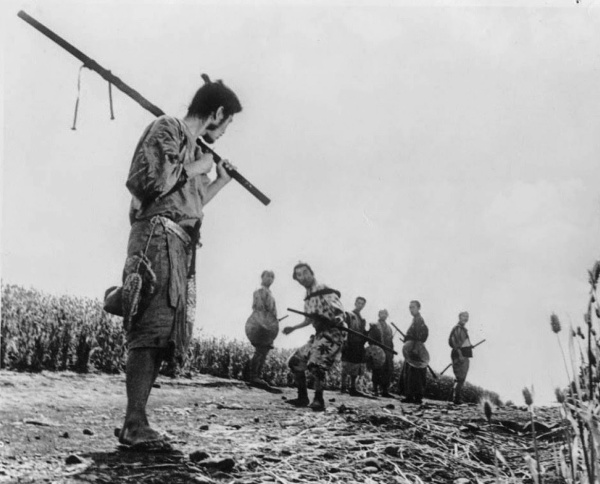 This is one of the undoubted classics of World Cinema. So it is good news that the Hebden Bridge Picture House is screening the film from a 35mm print and in a 190 minutes version: there are nine versions of different lengths but this is the 1991 almost complete re-issue. This is the sort of film that you can never see too many times; it always stands up to another revisiting. [Saturday November 3rd at 3.15 p.m.]

The story is set in the C16th during the Momoyama Period of Japanese history [‘warring states’]. A band of rōnin (masterless samurai) are recruited to defend a village from marauding bandits. The prime focus of the film are the samurai warriors, each carefully delineated and offering a particular aspect of the code and skills of this warrior class. Just a few of the villagers are delineated in an equal fashion but the contrasts between these two usually very separate classes is presented with great skill and clarity.

“[Its] universal appeal is partly because of the humaneness of the film’s characters. Each of the seven samurai is a distinct individual but never a caricature, about whom we come to care a great deal. It is a period in which the samurai class is declining. The rōnin samurai roam the countryside looking for work, but some have also become bandits. Because working for farmers would be below them, they kick aside the villagers seeking their help. What makes these seven samurai honourable is their continued adherence to the spirit of the samurai’s code of Bushido which allows them to reach past the class consciousness that normally separates knights from peasants.” (Beverley Bare Buehrer, 1990).

The early stages of the film depict the setting and the recruitment of the band and then their preparations for the defence of the village. And then in a long and detailed and dramatic section we watch as the battle ensues. This is one of the great presentations of samurai action but equally it is one of the great representations of armed conflict. 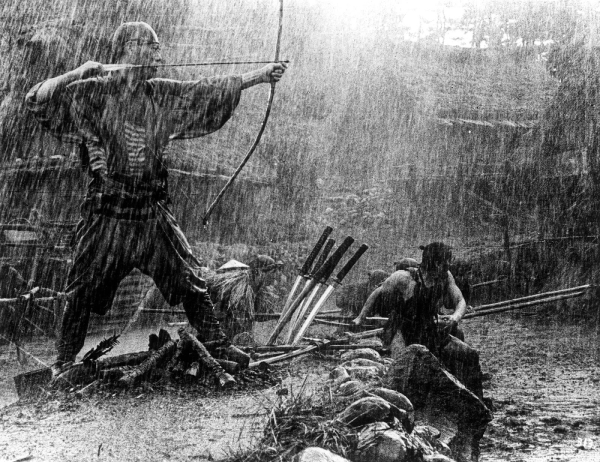 The film contains innumerable famous sequences spread across the narrative. Early on we watch as the samurai leader Kambei (Shimura Takashi) rescues a kidnapped child and then a demonstration of Samurai swordsmanship by Kyūzō (Miyaguchi Seiji). This varied group includes characters who are not traditional samurai; notably Kikuchiyo (Mifune Toshiro ) who later in the film give voice to the conflicting values of peasants and samurai. The final battle, which takes place in torrential rain, is a marvel of design, staging, cinematography and editing. And there is traditional musical accompaniment, not always the case in Japanese films.

The whole film is one of the finest productions directed by the master Kurosawa Akira. This is an outstanding example of his use of landscape within which are to be found fascinating and very human protagonists. The use of the telephoto lens and multi-camera techniques for much of the action gives distinct and very effective visualisation.

Seven Samurai is as famous as a model for Hollywood. The most well-known copy is The Magnificent Seven (1960, itself remade in 2016). Roy has some interesting comments on the Kurosawa film in a post on the 2016 remake. That is not up to the 1960 original: the latter is a good western but no substitute for the original. And, for me, the three hours fly by. 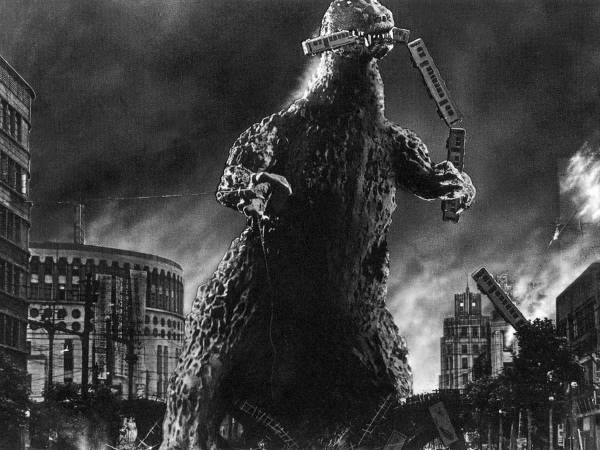 A film that ‘launched a thousand’ replicas: not quite but there are sixteen plus Japanese remakes or sequels. There are also numerous US versions: the original was re-edited and dubbed for the US market. Among the changes the US version downplayed the dangers of nuclear weapons, a key theme in the plot.

Beverley Bare Buehrer, in a commentary on the film recorded that:

“Toho executive producer, Tanaka Tomoyuki, saw the 1953 American film Beast from 20,000 Fathoms. He liked the film and coupled it with an actual event which happened in March of that year, the exposure to radioactive fallout of Japanese fisherman on the tuna boat, Fukuryu Maru, sailing in an area too close to an H-bomb test America had used near the Marshall Islands.”

Forgiveness is obviously a Japanese characteristic since they have co-operated with the Yanks since then rather than initiating economic boycotts.

The film was an expensive production by Japanese standards of the time. The film’s special effects relied on a skilled specialist Tsuburaya Eiji. I found the design of the production by Chuko Satoshi still convincing last time I saw the print. Tamai Masao’s black and white cinematography is finely done, [academy ratio]. The film’ soundtrack by Shimonaga Hisashi uses special sound effects. And the music by Ifukube Akira is especially effective. Director Honda Inoshiro orchestrates these talents into an excellent 98 minutes of action.

Whilst techniques have moved on and developed in the intervening decades the film stands up really well. The script is by Murata Takeo and Honda Inoshiro and the plot develops at a fairly fast pace and offers character relations as well as a monster and large-scale destruction. It is also the type of film that looks better in a 35mm print. So happily Hebden Bridge Picture House is using this format for a ‘reel film’ screening on Saturday February 3rd. The last time I saw the film the print was in good shape.

We enjoyed a good-looking 35mm print. The visual and aural special effects stood up well as did the monster and its rampages. Some of the plot is conventional but the recurring references to the US nuclear bombing of Japan are powerful. There is a reference to Nagasaki and a number of sequences that recall the horrors of 1945. There is also an interesting debate amongst the scientific characters about what should be done about the monster. Definitely a classic.

This is a classic samurai film and enjoys the talents of two stars: filmmaker Kurosawa Akira and actor Mifune Toshiro. Both bring their special talents to an entertaining and exciting action movie. Like much of their work the film has been remade several times, including as a spaghetti western, A Fistful of Dollars (1964), and as a Hollywood prohibition/action film, Last Man Standing (1996).

The film is set in 1860, just prior to the Meiji period and the rise of modern Japan. Mifune plays a ronin, that is a masterless samurai whose traditional functions have vanished and who takes on whatever work he can find. In this case in a small town he is offered work as a bodyguard (the English sense of the title) by rival merchants. The merchants are the emerging class in this period, but here they rely more on criminality than trade, forerunners of the modern Yakusa.

The main character and the film’s story are strongly sardonic. The opening sequence shows our hero passed by a dog carrying a severed hand. And the violence implied here is a central right through the film.

The cinematographer on the film was Miyagawa Kazuo. He had worked with Kurosawa on the earlier Rashomon (1950) as well as with other major directors like Mizoguchi Kenji and Ozu Yasujirô. As in some of the director’s other films Kurosawa and Miyagawa make great use of the telephoto lens. There is a depth of field in the shots, but a rather flat image as the action is foreshortened. Among the distinctive editing techniques, performed by Kurosawa himself, are frequent wipes, a technique rarely seen in post-war (WWII) cinema. And the music track by Satô Masaru uses distinctive instrumentation including wood blocks.

Kurosawa had set up his own production company. The first film was a variation on Shakespeare’s ‘Hamlet’, The Bad Sleep Well / Warui yatsu hodo yoku nemuru (1960). Mifune was the lead actor. Yojimbo was the second film from the company . Both film were also scripted by Kurosawa.

The film was popular in Japan and Kurosawa made a sequel titled with the character’s name, Sanjuro (1962). Once again Mifune played the lead. Yojimbo had a relatively large international release and has remained a regular title for revivals over the years. On its initial release in the Britain the BBFC gave it an ‘A’ Certificate.

The film’s format was black and white TohoScope. almost identical to CinemaScope with an aspect ratio of 2.35:1: with Perspecta Stereo sound., Now Hebden Bridge Picture House are screening the film in their ‘reel film’ series on Saturday January 6th. So it can be seen in its original 35mm format: what a treat. 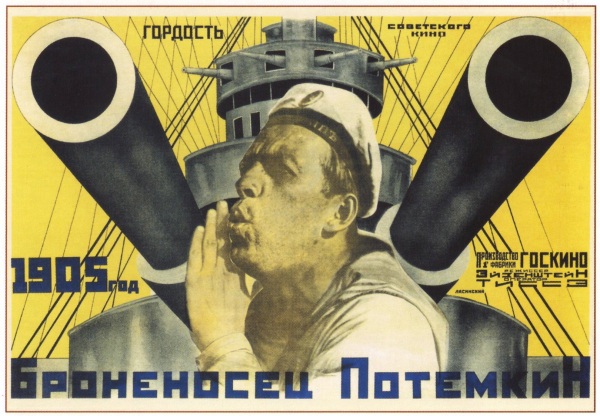 Hebden Bridge Picture House are screening a 35mm print of the 2005 restoration of this Soviet Classic. The screening is supported by the Cinema For All – Yorkshire (Group). This is a rare chance to see the film in its original form rather than just on digital. The screening will enjoy a piano score by Darius Battiwalla, an experienced accompanist who impressed audiences in the now sadly defunct National Media Museum ‘silent with live music’.

The Picture House, recuperated after the floods of 2016, now has a new 35mm projector. The introduction will place the film in the context of the seminal Soviet Montage Movement and, importantly, of the revolutionary society ushered in by The Great October Revolution, which Centenary occurred in the last few weeks.

Check out the cinema: http://www.hebdenbridgepicturehouse.co.uk/live-events/reel-film-battleship-potemkin