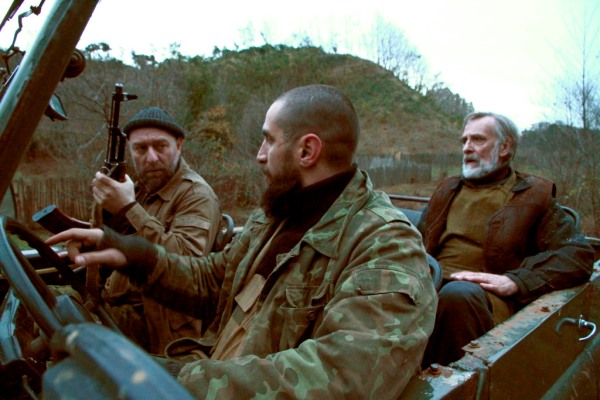 Ivo (in the back of the jeep) with two Chechen mercenaries. Shortly after, one will be killed and the other wounded.

Tangerines is a humanist drama with an anti-war discourse. The sizeable audience I watched it with at Square Chapel in Halifax certainly seemed to enjoy it and many were visibly moved by its story. A co-production between Georgia and Estonia it was written and directed by Zaza Urushadze from Georgia and stars the very experienced Estonian actor Lembit Ulfsak. Set during the period of nationalist and ethnic conflicts in the early 1990s following the dissolution of the Soviet Union, the story is set in the Caucasus region where two Estonians, Ivo and Margus, are all that remains of a larger community who have returned to their homeland. (The titles at the beginning of the film suggest that an Estonian community has been in the Caucasus for 100 years – I haven’t been able to verify this.) The two men have stayed on to harvest a valuable crop of tangerines. But the conflicts have enveloped their little community and after one engagement the Estonians find themselves with three dead soldiers to bury and two wounded soldiers who need to recover in Ivo’s house. The problem is that one is a Georgian and the other a Chechen mercenary allied to the local Abkhazians (who are fighting for a breakaway state from Georgia). When they recover, both men seem determined to kill the other. Ivo, whose house becomes the convalescent home, is getting on in years but he has strong convictions. Can he keep them apart and alive?

The location may be exotic for western audiences, but this is a familiar scenario from narratives about war. In fact Tangerines is a conventional film in many ways. It isn’t difficult to imagine it as a TV play from the 1960s – there is a small group of actors and only two main locations – Ivo’s house and the grove of tangerines and their limited surroundings. Only at the end of the film does the camera give us a sense of the terrain across the whole area. Just when I thought the narrative drive had slowed too much, something dramatic would happen and the narrative then built to the inevitable climax which provided a clear resolution. This was ‘satisfying’ in one sense but also seemed as if it was imported from a more generic action film – the rest of the narrative being much more of a personal drama. I enjoyed the film and I was moved by it. But thinking about it later I came up with the more distanced appraisal outlined above. I think mostly I was affected by the performances and the tight direction. Ivo is the kind of man we all hope we would be in a crisis – calm, resolute, able to see the best course of action (and able to produce fresh bread and cheese to feed his new house guests seemingly out of thin air). These performances and the overall direction help to produce an audience-pleasing film which has had a good festival tour, an Oscar nomination and now a release in the US and the UK (albeit in only a few cinemas – this is a film to pick up on DVD). However, in one of those ‘coincidences’ that seem to crop up regularly in film production/distribution, there is another film, another Georgian co-production, made around the same time with many similar narrative ideas.

I saw Corn Island (2014) at last year’s Leeds Film Festival and thought it very good indeed. Set in the same location at the same time, ‘Corn Island’ refers to temporary islands formed after Summer rains wash silt downstream. Another grandfather and his grand-daughter attempt to grow a crop of maize on one of these temporary islands before it is washed away by the next year’s rains. As well as the elements, the old man has to deal with patrols of soldiers from both sides of the conflict – and at one point a wounded soldier who shelters on the island and gets rather too friendly with the teenage girl. Tangerines was the Estonian nomination for the 2015 Oscars and Corn Island was the Georgian nomination. I think my preference is for the latter but it is revealing that whereas Tangerines received distribution in the UK, Corn Island didn’t, despite being a bigger budget film with a more cinematic feel. This perhaps says more about distributors’ views on UK audiences than on the films themselves. Tangerines did make the final Oscar shortlist of five, so perhaps we could argue that either distributors know how Academy members vote – or they are influenced by the votes. I stick by my preference but I’d still urge you to watch Tangerines as well as looking out for Corn Island. Both films were made by Georgians and I have seen one negative comment on Tangerines claiming it as ‘Georgian propaganda’. I can’t really comment on the political realities of the conflict, but I would see Tangerines as within a broad perspective of humanist/anti-war cinema.