Wai-chan, the fisherman in his 80s.

This is an engaging documentary about characters in a small Japanese fishing port. It’s long for a film of its kind, but it has an energy, the camera is often moving and the characters are interesting. Japan’s demographic of an ageing society and its experience of stagflation is indicative of where the UK and much of Europe is heading, so it’s also an important sociological insight into our futures. The good news is that in general the older people in the town seem cheerful and at ease with themselves and their situation. The exception to this rule inevitably becomes the central character and this reveals both the positives and negatives of the filmmakers’ approach.

Inland Sea is officially ‘No 7’ in the series of ‘Observations’ by Sôda Kazuhiro, the Japanese documentarist working out of New York with his producing partner Kashiwagi Kiyoko. I hadn’t come across Sôda’s work before. I think that in the UK he may be known only by those frequenting documentary or ‘non-fiction’ festivals (or strands in major festivals – this film was screened at Berlin in 2018), so I was pleased to be able to watch Inland Sea courtesy of distributors Rock Salt Releasing in the US. Most of Sôda’s previous work seems only to have streamed for 30 days on MUBI in various territories but now it is available to stream/download in the US (on Amazon, InDemand, Hoopla, Vimeo on Demand, Fandango).

Sôda trained in New York but only became interested in documentary after completing his course. He then discovered Fred Wiseman and became intrigued by his approach. If Inland Sea is typical of Sôda’s practice he is certainly a worthy disciple of Wiseman’s methods, becoming, as the subtitle to his films attests, an ‘observer’ of first the individual actions of people in their environment and ultimately of the communities and institutions in which they operate. Japan’s ‘Inland Sea’ is the body of water between three of the five main islands of Japan, Honshu, Kyushu and Shikoku in South-Western Japan. The focus of this film is the small fishing town of Ushimado, one of many ‘left-behind’ towns with a rapidly ageing population as younger people leave. Perhaps as a means to invoke this idea of ‘left behind’ by ‘progress’, Sôda decided to grade the film in monochrome although it was shot in colour.

This cat seems to cope very well with life in Ushimado.

A ‘conversation with Sôda on MUBI’s website by K. F. Watanabe suggests that Sôda operates under a set of self-imposed rules much like the Dogme ’95 Manifesto. The ’10 Commandments’ are listed on Sôda’s own website. They stress that this is to be a sole authored (and financed) film that will proceed with no research, no script, no theme, no narration and no music. It will have long takes and shooting will continue as long as required. This means that the film’s narrative (all films have a narrative of sorts) will be dependent on who Sôda and Kashiwaga come across as they observe a community. One review I read suggested that Kashiwaga comes from Ushimado or at least the region around it, so that might mean the people they meet are not completely random. Also, Sôda has worked in the area before, making Oyster Factory in 2015. I think that he met a couple of this film’s characters on the earlier shoot. Ushimado was also a favourite location for Imamura Shohei.

Sôda and Kashiwaga work as a duo as far as I can see. They are, in a sense, in the long line of North American ‘direct cinema’ filmmakers except that Sôda does intervene and prompt, occasionally asking questions. Though he only appears as a shadow holding the camera, his partner does sometimes appear in the background. I’m not sure this pushes him into ciné vérité territory in which the filmmaker becomes a provocateur, but it does mean that this is something other than ‘only observation’. Even if neither Sôda or Kashiwaga speak, the subject of the camera’s gaze often addresses them directly and questions them or cajoles them into action. 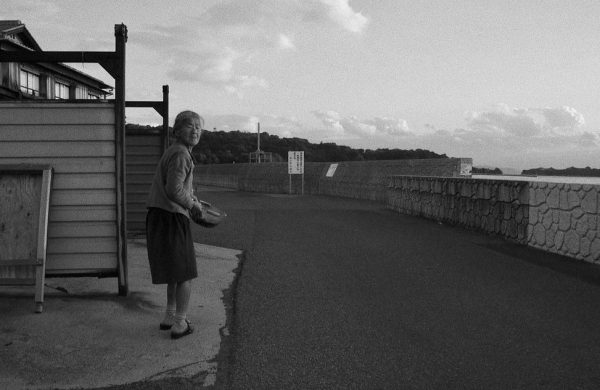 Kumiko spends her day on the sea-front and becomes the central character of the narrative.

Inland Sea begins and ends on the seafront with the woman who becomes central, Kumiko. She’s 84 during filming and we learn something of her difficult life. She is clearly lonely but also energetic and knowledgeable about the town and Sôda’s methodology means that he engages with her, seemingly ‘because she is there’. How the audience then reads how she is presented and how she presents herself will then determine whether she comes across as symbolic of a refusal to accept inevitable decline or that she becomes the focus for a critique of a society which just regards her as another case for welfare services. The same is true for the town itself with its empty houses (“the people died”, Kumiko tells us) but also with inhabitants who have found ways to continue – as in the case of the two other major characters, Wai-chan the fisherman and Koso the owner of the fresh fish shop who buys his catch. (I found Koso the most interesting character and I enjoyed the ‘procedural’ narrative that takes the fish from the sea to the customer.) We could argue that this selection of characters makes the film ‘humanist’ and doesn’t tell us what to think, even if it does ‘direct’ us towards different lines of investigation. I wonder how you will feel when you see the final shot?

I’d like to be able to show this film and I hope someone in the UK eventually finds Sôda Kazuhiro interesting enough to consider a DVD or digital download. Below is a film festival trailer. I should point out that the music isn’t in the film. Also, as someone who eats fish I found the fishing scenes disturbing, but as a cat lover I really enjoyed the feline characters.