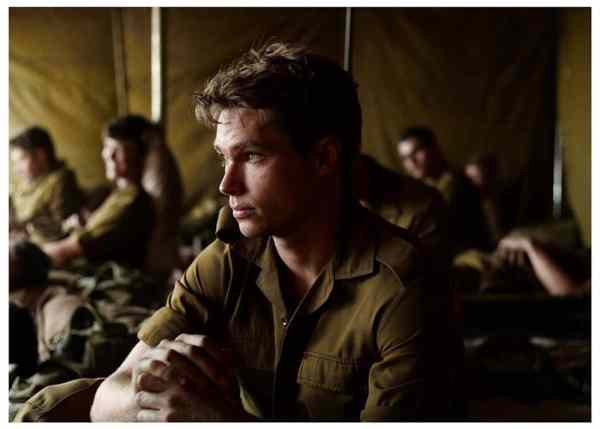 Nicholas (Kai Luke Brumer) brutalised and traumatised by his experiences

‘Moffie’ is the standard homophobic term of abuse in South Africa, apparently across various languages. This film has been described as a ‘queer war movie’. In 1981 what the South African authorities described as the ‘Border War’ was in operation along the boundary separating the former ‘South-West Africa’ from Angola. (Many of us outside South Africa thought of it as a ‘Liberation War’ on behalf of SWAPO – the South West Africa People’s Organisation.) Conscription in South Africa meant every young man over 16 was subject to 2 years National Service. Nicholas Van der Swart has an Afrikaans name courtesy of his stepfather, but his biological father is an English-speaking South African. He finds himself in a predominantly Afrikaans intake for basic training.

The conscription train picks him up . . .

The basic military training of raw conscripts is a familiar narrative in film cultures across the world. It always has an element of brutality, often via the figure of the Sergeant-Major or equivalent. Kubrick’s Full Metal Jacket is perhaps the best-known example, but there are many others. I’ve seen a few but none quite so foul and repulsive as the treatment handed out to the young men here. It’s a brutality delivered with constant swearing and sexist and homophobic insults. The conscripts are duped into thinking that they are fighting to protect the women and children of South Africa from the ‘blacks’, the communists and the threat of homosexuality (illegal in apartheid SA). Two conscripts found in the same toilet cubicle together are treated harshly with terrible outcomes. Nicholas defends himself in the intense testosterone-filled Afrikaner barracks, but he is spotted by another gay conscript. We learn about Nick’s earlier teenage years in a flashback and are prepared for what might happen as basic training continues.

There are only two direct contacts between the conscripts and black Africans. One is treated in a vile way, the other is an enemy soldier. I can’t remember if it was a line of dialogue or something I read in a review but I was struck by the observation that however evil the apartheid regime was in its treatment of black Africans, at least it wasn’t illegal to be a black African (but it was illegal to be in the wrong place). It was illegal to be gay and the psychiatrists of the South African Defence Force (like the Israeli Defence Force, quite happy to be offensive and cross into other countries) were prepared to use any methods to ‘convert’ young gay men.

The beauty of an African night

This the fourth feature by writer-director Olivier Hermanus. One of the first three films, Beauty (2011), also had a gay theme and did get a UK release by the LGBTQ specialist distributor Peccadillo Pictures. Moffie is a UK co-production but so far doesn’t seem to have a UK distribution deal. It certainly deserves one. The script for this film was adapted from an autobiographical novel by André Carl van der Merwe. The adaptation produces a confident, disciplined piece of filmmaking with a stunning central performance by Kai Luke Brummer in the central role. Many of the other young men in the cast are non-professionals. The photography by Jamie D. Ramsay is equally impressive, especially since the film appears to have been shot entirely in Western Cape Province. The restrained score by Braam du Toit also includes some local pop material including an allusion to the ‘Sugar Man’ phenomenon in the country and a local version of the Isley Brothers ‘Summer Breeze’ during the flashback sequence to Nick’s early teens.

Nicholas and Dylan (Ryan de Villiers). Is a relationship possible?

Once the basic training comes to an end, the brutal treatment of the conscript becomes less pronounced, though it is still there and increasingly insidious. Ramsay’s camera becomes more lyrical in presenting the bodies of the young men, often naked in the showers or skinny dipping en masse. In one scene they play volleyball bare-chested and in shorts and, reading reviews, I see that I wasn’t the only one to recognise what seems to be an hommage to Beau Travail (France 1999), the Claire Denis film about another set of gay relationships in a colonial army in Africa (the French Foreign Legion in Djibouti). These scenes are indicative of one of the great strengths of the film. Here is Jonathan Romney from his Screendaily Review commenting on the changing depiction after the earlier brutality:

That Hermanus is able, subsequently, to portray these young white men as human, vulnerable, even sympathetic, is a sign of the moral seriousness and subtlety of his approach.

I don’t want to spoil the narrative but I will say that the film does not have a conventional resolution. IMdB suggests that the film involves ‘War. Romance. Drama’. I think calling what Nick experiences ‘romance’ is misleading. Sensitivity, emotional bonding, loyalty certainly and desire for intimacy definitely but many of these young white men were traumatised and scarred by their experiences in the SAFD. Thirty years on they still find it difficult to process. All of this means that the film might struggle to find audiences outside South Africa, but I hope not.

This is a major achievement for a black filmmaker from South Africa who has made an important social statement as well as one of the best films of the year. If you get the chance, do go and see it. It opens in South Africa in 2020 and is still visiting festivals like Leeds.