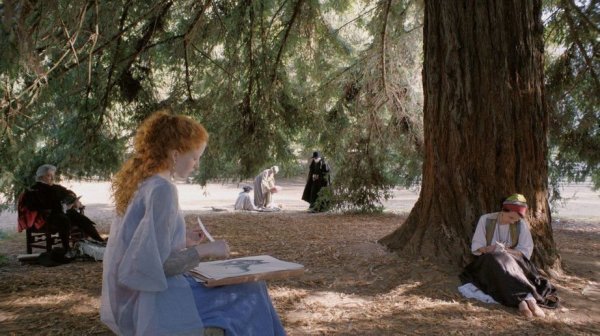 Clara Riedenstein as ‘the Portuguese Woman, sketching in the foreground in this tableau composition

A Portuguesa is an extraordinary film in many ways. It is very beautiful and it’s beautifully made with great intelligence. There is so much fascinating cinema out there but so often we find ourselves missing opportunities to see it and instead we allow ourselves to be led towards the mainstream. I have to confess that Portuguese cinema has long been overlooked in my cinema viewing and particularly the work of the great art film directors from that country. It’s not a surprise then that I have not seen anything by Rita Azevedo Gomes before, despite the fact that this is is her ninth film and that her first was made thirty years ago. Although successful at various festivals, Ms Gomes has not so far broken through into wider international recognition. Now, as a result of MUBI’s streaming service, more cinephiles will have a chance to ‘discover’ her.

A Portuguesa is a literary adaptation of a novella by the Austrian writer Robert Musil (1880-1942) adapted by the director. It’s the second story from the collection Three Women (1924). The story is set in the 16th century in Northern Italy where a German nobleman, von Ketten (Marcello Urgeghe), is engaged in military action against the Bishopric of Trent in the Dolomites. Von Ketten has brought his young Portuguese wife (Clara Riedenstein – very good) to a remote area where he has commandeered a small ‘castle’ on a hill at the end of a year-long honeymoon journey. Having established her in the castle von Ketten goes off to war, managing to make his wife pregnant twice in the little time he spends in the castle over the next 11 years. The first part of the narrative is mainly concerned with the ‘Portuguese woman’ herself (I don’t think she is actually named at any point) and how she finds a way to live in this isolated place and the second part deals with von Ketten’s return and what it means for the couple. But to write the outline in this way probably suggests a conventional narrative which this certainly isn’t. This is an art film in terms of both the sounds and images presented and in its narrative structure and (lack of) explicit narration.

One of the lighter scenes in which the couple take a bath ‘together’.

The beauty of the film lies in its staging and cinematography. Gomes searched carefully to find suitable locations in Portugal to stand in for Northern Italy. At one point when the mist appears in the hills, the protagonist mentions Sintra, but I think many of the scenes were shot in Northern Portugal. The approach seems to have been to present moments/scenes from the protagonist’s life in the form of tableaux. The camera often remains static but with significant movement within the frame, especially in the many scenes played out in long shot. In an interview Gomes tells us that she and the veteran cinematographer Acácio de Almeida (born 1938) spent a long time with a digital camera attempting to find ways to produce the exact colour tones that the director required. On my computer screen and TV set, what they discovered took my breath away, especially in the early scene when the noble couple first approach the castle with their retinue. This was accompanied by choral singing which I assumed was meant to be diegetic, though I couldn’t see anyone singing. The music in the rest of the film is more clearly diegetic though. These early scenes are presented in a realist style with attention to details in costume, hairstyles etc. but when characters speak in tableaux, they declaim almost as if on stage. This sense of ‘realist artificiality’ is enhanced by a deliberate use of lighting in compositions, especially inside the castle, which refer directly to the Flemish school of painting. The other element, which also opens the film pre the title, is a form of one-person Greek chorus performed by Ingrid Caven (another veteran at 80, an actor associated with the work of her ex-husband Rainer Werner Fassbinder). She recites/sings the medieval poem ‘Unter der Linden’ while posing in the empty castle grounds in a simple, long black gown which in its style suggests ‘modernity’. Ms Caven will appear at various points in the narrative, sometimes alone, sometimes weaving through the tableau.

This use of classical references occurs throughout the film and the combination of these references and the limited narrative information about the long war makes the film difficult to follow as a linear narrative even if you know the artistic references and/or the history of the Bishopric of Trent (modern Trentino) – which I don’t. The narrative is intended, I presume to refer in some way to the Council of Trent, the many years of wrangling in the Roman Catholic Church over how to respond to the Protestant Reformation. The Portuguese woman appears to be an atheist. The original novella seems to be (by reviewers’ comments) part of a collection of love stories. The film doesn’t come across to me as a romance or a particularly erotic story, though the elements are all there to make it so. I think, instead, I found it an interesting narrative about gender roles, feudal society and other historical/cultural analyses. The most interesting of these for me was the presentation of a vital, talented young woman coming to terms, or not, with her situation. As part of this she has strong relationships with the women she has brought with her from Portugal, especially her closest servant-companion played by Rita Durão (who has been a leading player in earlier films by Gomes and also for other women directors). At one point there is mention of “Moorish slave girls” by the the Portuguese Woman but I couldn’t see any signifiers of ‘Moorish’ or indeed of ‘slaves’ – the younger women especially seem well treated by a ‘mistress’ who clearly appreciates them. It’s worth remembering at this point that Portugal was the first European country to establish a global empire from the late 15th century onwards.

The noblewoman is frustrated by her confinement but not in an anachronistic way. We recognise what her problems and her wishes are. The issues for her husband are also rooted in their time but are more difficult to fully comprehend. I assume that we are meant to see his commitment to war as something that stands in the way of a deeper and more sustained relationship with his partner and that his attachment to hunting is necessary to confirm his virility.

A Portuguesa is a long film (135 minutes) and this is for me its major flaw. It is slow-paced and after a time I found that the beauty of scenes began to be overtaken by my wish for more narrative information (perhaps this was because I missed the references I might be expected to follow up?). Even so, I found the film intriguing and aesthetically pleasing. I will watch any of the director’s other films that night appear. The film is on MUBI’s regular rolling programme for the next three weeks. I don’t know if it will then be accessible from the library. Here’s the original Portuguese trailer, French and German as well as Portuguese is spoken in the film.