The Veenai Odeon in Georgetown, Penang – built before 1960 and now the only traditional cinema in Penang showing the latest Tamil releases.

In most film territories around the world, screens are dominated by Hollywood and popular ‘domestic’ cinema. Malaysia is a striking exception in that although Hollywood is present and overall takes the largest proportion of the nation’s box office takings, it nevertheless has to share the pot with films from the three different film cultures representing Malaysia’s principal ethnic groups plus a significant minority of films from elsewhere in Asia.

There are at least a couple of useful websites covering film in Malaysia and I’m going to use these alongside the annual Focus International Market Reports and some primary research based on newspaper cinema listings.

Malaysia as a film market

To place the Malaysian film market in perspective, according to Focus 2010, Malaysia is a ‘mid-market’ film territory, ranked alongside Taiwan, Indonesia, Philippines, Thailand, Singapore and Hong Kong (now increasingly enmeshed with the mainland Chinese market). Malaysia is relatively small (28 million population) but also relatively affluent with a per capita income well ahead of all the others, barring Singapore and Hong Kong (both, in a sense, ‘special cases’ in their roles as important financial centres and entrepôt ports). In 2009, Malaysia produced only 25 local titles but still managed to capture nearly 14% of its total box office. With total admissions of 44 million, Malaysia was well ahead of larger countries such as Indonesia, Philippines and Thailand. The country is ‘underscreened’ and there is plenty of capacity for expanding the market. With a per capita attendance rate of only 1.59 visits per year (compared to the 4.63 of Singapore) we might expect to see expansion in the market.

The Star is one of the English language newspapers in Malaysia and on Saturday 22 January it carried display ads from Malaysia’s six major cinema chains, Cathay, Golden Screen, Lotus 5 Star, MBO, BIG Cinemas and TGV plus one single screen. I checked all the titles being advertised. Some were playing several times a day others only once and I was slightly confused by some of the ads for ‘de luxe screens’ – I wasn’t sure if I was double counting. Still, the results do reveal some of the interesting facets of Malaysian exhibition practice. Helpfully, the convention is to list the language of each title in the ad, so I am at least confident of the range of titles.

Here are the raw results which show the number of prints from each producing country/language across all screens.

What do these figures mean in actual film titles? The Hollywood films are usually either the family orientated blockbusters (Gulliver’s Travels and the latest Narnia film both played during our stay in Malaysia) or action titles such as Faster, Season of the Witch and The Tourist or comedies such as Meet the Parents.

The Malay language numbers refer almost exclusively to Khurafat with occasional listings for two other horror films. The Indonesian, Korean and Thai imports all seem to be horror or action. The ‘art film’ sector appears to be confined to Kuala Lumpur which boasts three cinemas screening the Iranian title The Song of Sparrows (the Iranian 2009 Academy Award entrant) and one showing Dhobi Ghat in Hindi (the other Hindi screenings are mainstream Bollywood). The Japanese title was the main new 3D offer – an important development in the face of Hollywood 3D domination. This is Shock Labyrinth 3D: House of Horror, a 2009 film by shlockmeister Shimizu Takashi which is very poorly rated on IMDB and is only now creeping around international markets.

There were surprisingly few Chinese films on release in the period just before the New Year, but two titles stand out, Great Day and Homecoming are both family comedy-dramas for the New Year and both appear to be products of the domestic Malaysian-Chinese industry. The Yahoo Malaysia Movies website synopsis:

Great Day tells the story of two uncles who live in an old folks home. Aggravated by an argument and with the help of Ah Hock and Ultraman, the two men decide to escape from the home and find their children, just to show off whose children are better. The fun catches on with odd circumstances one after another, but in the end of the day it’s going to be a big reunion at the old folk’s home. 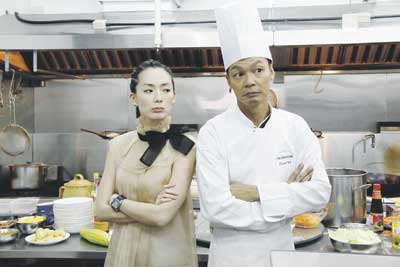 Homecoming is a Malaysia-Singapore co-production mining the generic possibilities in stories about Malaysians working in Singapore. Both these films, as far as I can see, include dialogue in Mandarin, Cantonese, Hokkienese and Malay and I suspect that they are also subtitled in English and/or Mandarin/Cantonese. They have a good chance of cleaning up before the arrival of the fifth sequel to the Hong Kong New Year Favourite All’s Well Ends Well. The other Chinese titles on offer are action films like Shaolin with Jacky Chan. 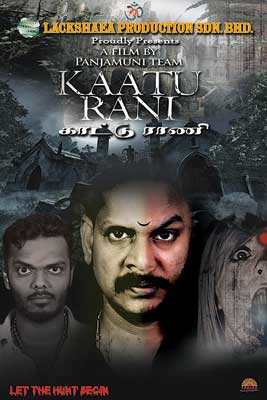 Kaatu Rani (‘Queen of the Jungle’)

The strong showing for Tamil films might possibly be explained by the local festivals at this time of the year (e.g. Thaipusam and Thai Pongal). There is usually at least one Tamil film in each large multiplex and also in traditional cinemas such as the Penang Odeon shown at the head of this post. Distributors take the current Tamil film release from India on a ‘day and date’ basis and these may last a couple of weeks. Siruthai is an action comedy, Kaavalan is a romantic drama and Aadukalam a sports film based on cockfighting in Madurai. At the same time, there appears to be a local Malaysian Tamil industry and I came across Kaatu Rani in a newspaper cutting from the New Straits Times. This local horror film was made for just RM180,000 (around £37,000) with local cast and crew but some post-production in India. After two première screenings in local cinemas the film was scheduled for an immediate DVD release. Subtitled in English the film will also be sold in Singapore, Sri Lanka and India.

Leeds International Film Festival screened the winner of the Palme d’Or Award at the Cannes Film Festival in the capacious Town Hall auditorium. The large screen gave proper scope to this visually stunning film and it offered a good reproduction of the film’s imaginative soundtrack. The slight drawback was that the film was screened in the afternoon. I discovered that there some daylight seeps in through the upper windows and this, together with slight shadows, can fall onto the screen. Most films you would not notice. But Uncle Boonmee, in the scenes set in the jungle, has the lowest illumination I have seen in contemporary cinema. It is only matched by equivalent scenes in the same director’s earlier Tropical Malady (Sud pralad, 2004). The other feature by this filmmaker that I have seen is Syndromes and a Century (Sang sattawat).

All three films have elliptical narratives and are full of ambiguities. Uncle Boonmee does seem straightforward compared with the earlier works, but that is a relative quality.  In an interview in The Guardian (with Steve Rose, 12 November 2010) Joe [as he prefers to be known] commented: “Sometimes you don’t need to understand everything to appreciate a certain beauty.” And on the film, “It talks about death and at the same time life and dreams, and also the memory of how I grew up with this landscape.” The film’s setting is Northeast Thailand, near to the director’s family village.

The part of the film that resembles a plot is simple to describe. Tong, a young man, together with an older woman, Jen, visits Uncle Boonmee, a farmer. Boonmee is ill from a kidney infection which requires his Laotian servant, Jaai, to drain it every day. In the course of an evening meal the spirits of Boonmee’s dead wife and son joins the trio. The son, Boonsong, recounts mysterious events in the forest. These include relations with animals and re-incarnation in animal form. Later Boonmee and his visitors explore a nearby cave where he recounts a strange dream. The film ends as Tong and Jen attend Boonmee’s funeral.

The film seems most interested in the world of spirits and dreams. And the boundary between what we call the real world and that of the imagination seems extremely fluid. The film delves into memories and old stories and represents a traditional culture that may be disappearing, but which still seems potent. There is clearly a Buddhist element, but the film seemed to me spiritual in the sense of unseen worlds rather than that of formal religions. Apparently the director was partly stimulated by a story of an old man who recounted his previous lives as other people and as animals, [A Man Who Can Recall Past Lives by Phra Sripariyattiweti]. Memory is central to the film, but not in a manner that western audiences are used to.

The worlds thus created are presented in lustrous visuals and sound. The film possesses some of the darkest frames seen on a screen, with only a shadow or an outline visible. It also captures a range of natural settings in varied hues and colours. The accompanying sound track is a mixture of sounds, voices, music, and added noise. It creates as much beauty and ambiguity as the visuals. Weerasethakul often uses distinctive techniques. The dream sequence is composed of stills rather than using photographic effect. At the end of the film a superimposition presents the audience with three characters and their possible clones?

Much of the effect of the film must be down to the talented production crew working on the film. The three films that I have seen all had the same Editor and Production Designer, Lee Chatametikool and Akelarat Homlaor: and the cinematography is by Sayombhu Mulkdeeprom, who filmed Syndromes and a Century. If Weerasethakul has a flair for combining striking settings, images and sounds: then he is extremely well served by the craft people who work on the films.

The film does not seem to be merely about nostalgia. There are contemporary references to the problems of today’s Thailand. The character of Jaai raises the issues of prejudice against immigrants. Boonmee relates his illness to the suppression of a communist insurgency in past years. And at the end Tong and Jen watch a television in a hotel room, and it appears to show troops and protesters in the Thai streets. Such references are, however, as ambiguous as the spirits in the film. When I viewed the credits I found a reference to a film extract but not to any television news. And the final sequence of the film left me puzzled. Tong, who is revealed as a Buddhist monk, changes into lay clothes. Also in the room are Jen and a young woman. A superimposition leaves the trio watching television whilst at the same time Tong and Jen descends to eat a meal in the restaurant. As they sit together they are listening to a loud and [I thought] brassy popular song. After the slow quietness of much of the earlier film this felt like a major disruption. But I was not sure what was meant by this disruption? It occurs to me that it may not be a disruption: the scene could present the ease with which these characters move between the ‘traditional world’ and the ‘modern’ world.

Uncle Boonmee will shortly get a limited release in the UK. If you have seen Weerasethakul’s earlier films you will probably want to see this. I found it an absorbing and at times exhilarating experience. Not everyone will enjoy the ambiguity and elusiveness: [two of the audience gave up about halfway through in Leeds]. But I think most of the viewers in the Town Hall were impressed. It has a 12A certificate and whilst not explicit, the tales recount adult material.

Apart from a number of WebPages there is a review and an extended article on the director and the film in Sight & Sound December 2010.