Guillermo del Toro picked out Fallen Angel as one of the films that he and his partner Kim Gordon studied while they were working on the script for his new film Nightmare Alley. He suggested that at least one scene in his new film used a similar set to one used in Fallen Angel. Critics now consider consider Fallen Angel to be a film noir but it has generally been regarded as somehow inferior to director Otto Preminger’s earlier Laura (1944), also featuring Dana Andrews in a lead role. Fallen Angel does seem to me to be a more interesting film than Laura for a couple of reasons. As del Toro suggests, it’s grittier – and about ‘ordinary people’. It is also definitely noirish in tone, considering the use of sets and locations and Joseph LaShelle’s cinematography. But perhaps the central noir element is the pairing of Dana Andrews and Linda Darnell and the discourses created by the script.

First, however, we have to consider the casting of Alice Faye. Ms Faye became a major star in the 1930s after chorus girl work as a teenager. She developed a singing career winning starring roles in musicals at 20th Century Fox. But after her second pregnancy kept her away from the studio for longer than expected she decided to reduce the number of films she made (Fox had exploited her immense popularity by placing her in films that made money simply from her presence). In 1945 therefore, still only 30, she accepted a dramatic role in Fallen Angel, hoping to steer her career in a different direction. She didn’t get on well with studio head Darryl F. Zanuck and she was angry when Zanuck cut some of her scenes and switched the emphasis in the narrative to Linda Darnell. I didn’t recognise Alice Faye at first and it wasn’t until the second half that I realised she was the lead. I was indeed more interested in Linda Darnell. This probably doesn’t mean much now, but in 1945-6 audiences would have been surprised and probably disappointed that Alice Faye is not more prominent in the film. 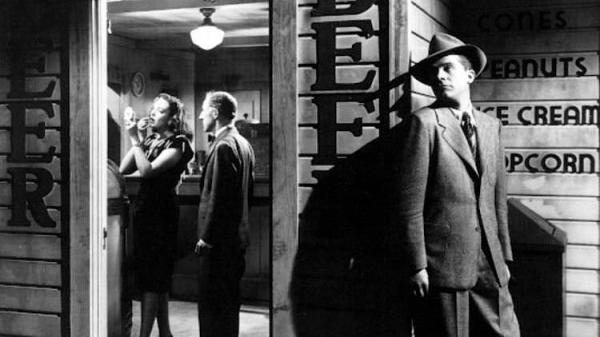 Stanton outside Pop’s Bar with Stella and ‘Pop’ (Percy Kilbride) inside. This still is used as the cover image of ‘The Movie Book of Film Noir’ (1992)

The film depends a great deal on the performance by Dana Andrews and on the presentation of June Mills (Alice Faye) as a woman who is sexually repressed and dominated by her older sister Clara (Anne Revere). The film opens with a drifter, Eric Stanton (Dana Andrews) arriving in a small coastal town after being thrown off the San Francisco bus when his ticket expired. Stanton has little more than his small suitcase, a suit and hat and his ready wit. In Pop’s Bar he comes across Stella (Linda Darnell) behind the counter and ‘retired’ police officer Mark Judd (Charles Bickford) propping up the bar. We gradually realise that Stanton is a con-artist and he quickly discovers that a medium (played by John Carradine) is due to visit the town and relay messages from the dead. Stanton is soon inviting himself to drum up the crowds for a commission fee. In doing so he comes across the Mills sisters as Clara is actively trying to stop the medium’s performance from taking place. It soon becomes apparent that Stanton wants Stella because she is a beautiful woman and desperate to leave the small town. Marrying a smart guy is her preferred ticket out. But Stanton, though interested, discovers that June could also be persuaded to ‘live a little’ and that she has money. Could he find a way to get June’s money and then leave town with Stella? 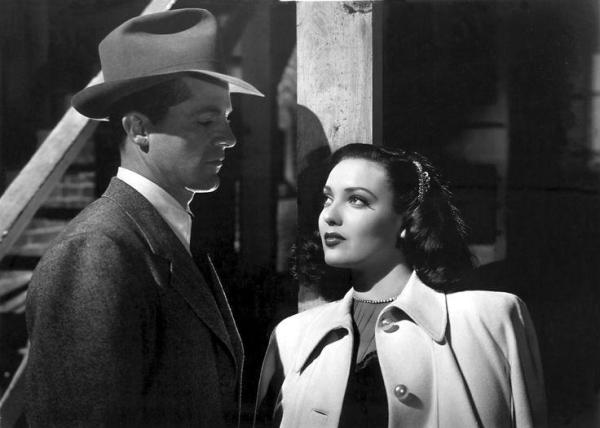 Dana Andrews is an interesting star performer whose deep, low voice and manner tend to suggest someone trustworthy and this film appeared between his two celebrated performances in Laura and the phenomenally successful The Best Years of Our Lives (1946) from William Wyler. Audiences are invited to determine whether Stanton is a charming con-man or a dangerous killer and there are scenes which support either view. There are also moments when I found myself almost convinced by his stories. I note that he appeared in five films for Preminger, but my introduction to his work was the two films he made for Fritz Lang, While the City Sleeps and Beyond a Reasonable Doubt (both in 1956). Del Toro says that what fascinates him about Andrews is the way the actor seems to present himself as bottled up with emotion. What we think about Stanton here depends mainly on how he behaves with Stella and June. Linda Darnell is one of far too many attractive young women (and she was very young, only 15, when she signed a contract at 20th Century Fox in 1939) who struggled to get established in Hollywood. Any acting talent was often ignored by producers focusing on her beauty. Until recently the only role of hers that had stayed in my mind was as Chihuahua in John Ford’s My Darling Clementine (1946), but recently I watched her excellent performance in Joe Mankiewicz’s No Way Out (1950). In Fallen Angel the question might be whether she is the angel or whether Stanton is a Satanic figure – the title is later referenced in a line of (possibly fictitious) poetry. Stella, despite the allusions in her name, seems not to be seeking stardom but rather the conventional dream of marriage and comforts at home with city life as a diversion. 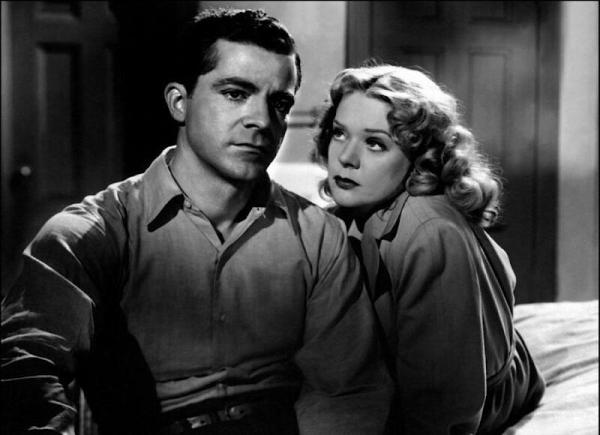 For me the the plausibility of the narrative depends on Faye’s performance as June. Can she convince us that she is a talented woman (Stanton’s first real contact with her is when he finds her playing the organ in a church) who could fall for a man like Stanton so suddenly and in the face of her sister’s doubts? Or perhaps her sister’s dominant behaviour pushes June towards a form of rebellion? Here it is worth noting that the novel which Preminger and screenwriter Harry Kleiner adapted as Fallen Angel was written by ‘Marty Holland’. This name turns out to have been a pseudonym for a young woman working as a typist at Paramount. Her script was bought by Fox for $40,000. She had just one more credit, for The File on Thelma Jordon (1949) starring Barbara Stanwyck. Fallen Angel doesn’t feel like a script adapted from the ‘hard-boiled’ writers who were the source for several well-known films noirs and I’m imagining that the female audience in 1945 might well have found June a believable character. It’s worth noting here that the film’s time setting doesn’t indicate the end of the war and it could be more like a 1930s narrative.

Stanton and June with Judd and Clara

I’ve not outlined the key events of the second half of the story. All I’ll say is that there is violence, but most of it off-screen. Overall the narrative worked for me but I can see why some audiences might be disappointed. I’m not sure the ending lives up to the noirish tone of some of the earlier scenes. I think I enjoyed the performances most of all. The music is by David Raskin and it features a song, ‘Slowly’ played several times in Pop’s bar by Stella. Ironically, Alice Faye recorded the song and it was to be used in the film but Zanuck decided to use the Dick Haymes version in the final cut. No wonder Faye left Fox in high dudgeon! The film is widely available on streamers but try not to miss the opening titles which are presented in typical Preminger style as illuminated road signs seen through the windscreen of the bus carrying Stanton. I’m glad I watched this film and I think I’ll watch some more of del Toro’s selection of noirs and ‘near noirs‘ before seeing Nightmare Alley.

Here’s a clip from Fallen Angel featuring Stella and Stanton: