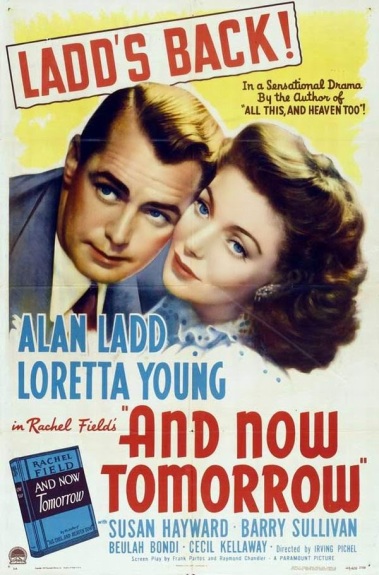 My main interest in this film was its status as the second scriptwriting project for Raymond Chandler at Paramount shortly after his work on Double Indemnity. It certainly seems like a strange choice made by the studio. The only justification seems to be that it was a chance to develop Chandler’s knowledge of scriptwriting by giving him a different partner to write with. Trying to discern what Chandler might have contributed to the script is not easy.

And Now Tomorrow is a familiar studio genre picture, a romantic melodrama using the device of a disease/accident as the narrative disruption in the early scenes. It might also be what in the 1930s and 1940s was known as a ‘woman’s picture’. Partly this is because it was adapted from a hit novel by Rachel Field and partly because it starred Loretta Young and Susan Hayward as central characters. It is essentially a story about the Loretta Young character although Alan Ladd gets top billing. The woman’s picture is usually a film with a central female character who drives a narrative that requires her to overcome a problem arising because she is a woman – conventionally in this case a problem with her intended wedding. The audience is intended to comprise women in the main. Maria LaPlace (1987) points out that in many Hollywood films of the 1930s/40s, women’s stories are inevitably ‘re-positioned’ to in a patriarchal film industry to serve more masculine discourses. This means that it became important for feminist scholars to find those ‘marginal’ areas of cultural discourse which, though still largely controlled by men, are actually sites of production by women and for women. Thus publishing, both of novels and within women’s magazines becomes an important locus for stories.

Early in the narrative, Emily is introduced to Dr Vance by her family doctor (Cecil Kellaway)

Wikipedia suggests that originally Jane Murfin, an experienced scriptwriter with many credits, was assigned to the film, but eventually she was replaced by Frank Partos. There is no mention of a separate writer for the adaptation so Partos and Chandler presumably had to produce a screenplay directly from the novel. This is where the studios use of contracted writers comes in. The idea might have been to provide more experience for Chandler but pairing him with Partos, a Hungarian Jew of roughly the same age as Billy Wilder, did not mean a change. Working with a woman might have made sense. As it is, it is interesting because Partos had worked several times with Wilder’s writing partner Charles Brackett who Chandler had replaced as Wilder’s partner on Double Indemnity (Brackett didn’t think much of James M. Cain’s writing in the original novel). Partos had just finished working on the script for The Uninvited (1944), a fantasy horror which proved a significant hit for Paramount. Chandler would find his next job at Paramount would be the follow up known as The Unseen (1945), a mystery thriller.

The plot of the film is straightforward. Emily Blair (Loretta Young) is a wealthy young woman living in Blairtown in New England where her family owns the local mill. Just as her marriage to an ‘appropriate’ young man Jeff Stoddard (Barry Sullivan) is announced, she falls ill with meningitis and though she recovers she finds she has lost her sense of hearing. She postpones the wedding and seeks a cure from international specialists to no avail. The fact that she feels that her deafness is a barrier to a ‘proper marriage’ is the problem she must overcome. Alan Ladd plays Dr Merek Vance, formerly from the poorer part of Blairtown, who now practices in Pittsburgh. He meets Emily by accident, noticing that she is deaf and being impressed by her lip reading. It turns out he is conducting research into hearing loss and eventually he agrees to make her part of his trials of a new serum. You can probably guess what happens. The potentially interesting sub-plot involves Emily’s younger sister Janice (Susan Hayward) who sees Emily’s reluctance to marry until she gets her hearing back as an opportunity to pursue Jeff. As in the best romances there is a stumbling block to Emily switching her attention to Merek and that is the class difference and his sense of grievance against the Blair family. 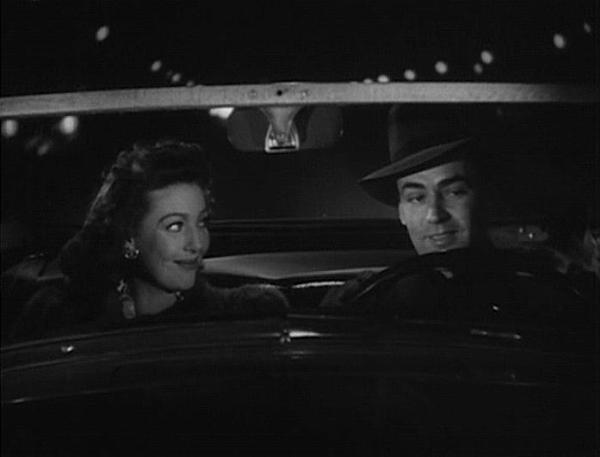 Does this scene include Chandler dialogue? (Screen grab from DVD Beaver)

I was engaged by the film and enjoyed it up to a point (more Susan Hayward would have been good). I certainly didn’t have the very negative responses of some leading US critics at the time who were especially cruel about Loretta Young’s performance. Bosley Crowther in the New York Times called it a “stupid picture”. Bad reviews don’t seem to have affected Box Office which was generally very good – as predicted by the trade papers. The director Irving Pechel was not generally liked by the cast and Loretta Young and Alan Ladd didn’t have a strong connection – though they seemed to work together effectively. What might Chandler have contributed to the script? Not much to the narrative structure, I’m guessing, but probably something to the dialogue. I was most interested in the Alan Ladd character in a part quite different to that of his lead in The Blue Dahlia (1946), which Chandler scripted on his own, using one of his own story ideas. I don’t really know Ladd that well as an actor but with Chandler’s dialogue in The Blue Dahlia he speaks in measured tones with pauses and there is a sequence in And Now Tomorrow which is similar, after Emily assists the doctor on an emergency operation they talk in the car (see above). He tells her he is “worn down to the ankles” which sounds like a Chandlerian line. At other times Ladd as Vance is quite sharp, mainly when his anger about poverty in the mill town comes to the fore. The other interesting aspect of the Ladd role in this ‘woman’s picture’ is that it is as another doctor who studies the woman who ‘lacks’ something and is then allowed to interpret what it might be. The doctor’s medical gaze replaces the erotic male gaze which is prevalent in other narratives. Sometimes by ‘solving’ the woman’s problem (often psychological rather than physical) the doctor enables her to find romance (as in Now Voyager). In this case Dr Vance becomes the beneficiary himself. See Mary Anne Doane (1987)

The tragedy of the film production is that Rachel Field died suddenly after an operation in 1942 before the script was ready and the camera rolled. I do wonder what she would have made of the adaptation. I think I should point out that the medical discourse in the film isn’t convincing and that the film doesn’t do much to help audiences’ understand hearing loss. I couldn’t find the film on any streamers but I watched a Region 2 DVD.

Doane, Mary Ann (1987) ‘The ‘Woman’s Film’: Possession and Address’ in Christine Gledhill (ed) Home is Where the Heart Is, London: BFI Books