Vigil is a 6 x 60 minutes serial broadcast on a weekly basis (i.e. with cliffhangers and no prior access for streaming) after a two parter over the Bank Holiday weekend. It has been promoted as being from the production company behind Line of Duty and is running in BBC1’s primetime Sunday 9.00 pm slot. The production company World Productions, founded by Tony Garnett in 1990, is one of the most successful in UK TV and now owned by ITV, but its shows appear on both ITV and BBC channels. The basic premise for the show is that a submariner dies under suspicious circumstances while serving on ‘Vigil’, one of the UK’s four nuclear submarines carrying missiles with nuclear warheads at all times. Because the ‘boat’ is still in British territorial waters, a police officer from the local force for the submarine base is transported to the submarine to investigate. Meanwhile a local trawler has been dragged beneath the waves by a submarine. Is ‘Vigil’ at fault or is there a second submarine in the same waters?

I find this serial particularly gripping for several reasons. It is an intriguing meld of different genre repertoires. It isn’t purely a police procedural because of the compromised status of the investigator DCI Amy Silva (Suranne Jones). The narrative possibilities of the police procedural are compromised by the naval military procedures and especially the strict rules about actions and behaviour on a nuclear submarine. There is a long tradition of generic narratives concerning an investigator who finds himself/herself restricted by the codes of conduct in an isolated community. But this turns out to be a complex case for DCI Silva and much of the legwork ashore has to be carried out by her DC, Kirsten Longacre. The police-Navy confrontation is further complicated by the appearance of MI5 whose interest might be prompted by several different aspects of the case. We are familiar to some extent with the idea of different branches of the police forces in the UK coming into conflict from Line of Duty and other police procedurals, but MI5 interest suggests another kind of narrative. Again there is a long tradition in UK film and TV of ‘secret service’ types interfering with all kinds of individuals who might threaten the ‘national interest’ (a highly dubious concept at best). Finally, in all contemporary thrillers we seem to have a personal story involving the lead investigator and ‘Vigil’ is no exception. From the opening credits I felt that ‘Vigil’ explores the playbook of The Bridge with a similar sounding opening song, aerial and long shot photography and trouble for its prime investigator. 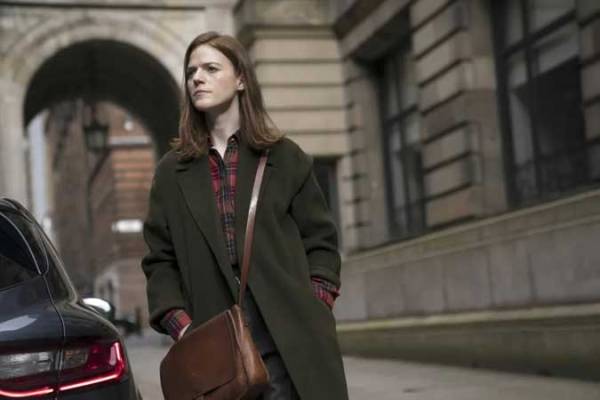 So far we been offered three of the six episodes and without spoiling the narrative, we appear to have what might be termed a ‘peeling the onion’ narrative – everything that Amy and Kirsten discover seems to lead to a new layer of meaning and another possible narrative. Unlike with many of the recent crime fictions on TV I find myself gripped by the tension but not completely bewildered by the narrative. I’m impressed by the setting in and around a nuclear base meant to resemble the real base at Faslane, West of Glasgow on Gare Loch. Episode 3 ends with a chase on the streets of Central Glasgow with its steep inclines and the narrative feels securely located – unlike the the more generic scenes in Line of Duty, shot in Belfast but seemingly meant to be somewhere else. The sense of a recognisable environment carries through to the casting and I’m enjoying seeing Gary Lewis with his wonderful voice as the Detective Superintendent and Rose Leslie as DC Longacre, both highly convincing as are the navy personnel with Stephen Dillane as the Rear Admiral in charge back at the base. Suranne Jones is one of UK TV’s top actors now, vying with Sarah Lancashire for the best lead roles. Amy’s back story, emerging in flashbacks, some long and others literally ‘flashes’, will perhaps eventually reveal how she comes to be in the West of Scotland.

Vigil is written by a small team of writers with Tom Edge listed as ‘creator’ as well as lead writer. Edge has broad TV drama experience and also wrote the ‘part biopic’ Judy (UK 2019). There is a different director for the second three episodes and it will be interesting to see if there is any noticeable change in style. There appear to be two cinematographers as well. The serial is presented in a 2.00:1 aspect ratio, the kind of format I first recognised  in ‘Nordic Noir’ productions (though they might have been slightly wider still). Vigil opens with dramatic shots at sea and the wider format gives it a filmic sense of expansiveness. This still seems quite daring for BBC1 (as distinct from BBC2 or BBC4 where different aspect ratios are more common). I should note that as might be expected, viewers with a naval background and especially submariners have criticised all the details of life underwater. I don’t think that authentic detail in what is a difficult environment to represent on screen without very expensive sets is a major consideration here. Instead, the three repertoires of genre elements and how they are used is the central concern. This has been the most watched TV drama of 2021 so far with 10.2 million watching the first episode on broadcast and catch-up.

I’ve been fully engaged for three episodes and I’m hopeful the second half will continue in the same vein. I you haven’t tried it yet, the first three episodes are on iPlayer in the UK.