Producer-writer-director Eric Khoo has an interest in Japanese culture as seen in his animated film about a manga writer Tatsumi (Singapore 2011). Khoo has also long been interested in films about food and cooking. Ramen Shop is therefore a logical choice of subject for a film which is about national and personal/familial relationships and centred on identity issues. 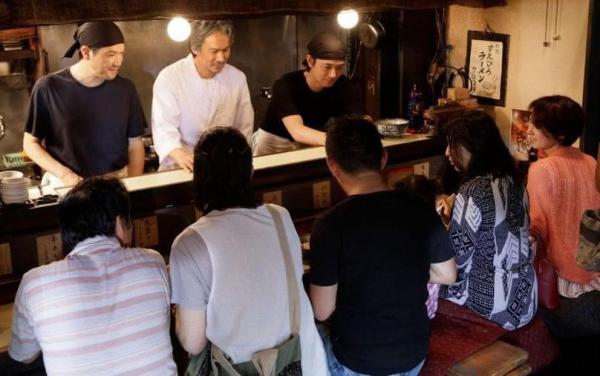 Masato is a very handsome young man (played by Saitō Takumi who worked as a model in his teens and who is rather older than he appears to be in this film). Masato’s mother was from Singapore where the family lived for ten years before his father took them back to Japan. Lian Mei (Jeanette Aw) died in Japan when Masato was still a young teenager and life with his father Kazuo (Ihara Tsuyoshi) was quite difficult as his father tended to ‘shut down’ after his wife’s death. Masato began to work in the family ramen shop in Takasaki in Central Honshu alongside his father’s brother, a man with a much more open personality. Suddenly one day his father collapses and dies. After the funeral Masato discovers his mother’s diaries which detail her life in Singapore. Unfortunately, they are all written in Mandarin which Masato is not able to read. (We assume that as a child he spoke either English or Japanese.) Masato doesn’t remember much about his childhood but as a chef he has been interested in Singaporean food and has kept up a correspondence with a blogger called Miki in Singapore who sends him recipes and spices. He makes a decision to travel to Singapore to try to find out more about his mother’s past. He also wants to find the secret to making the best ‘pork rib soup’, in some ways the Singapore equivalent of ramen. The narrative will develop with a parallel set of flashbacks as Masato uncovers the history of his parents’ relationship.

Masato and Miki enjoying views of Singapore when he first arrives

When Masato arrives in Singapore he meets Miki and she begins his education about Singaporean culture. I won’t spoil any more of the narrative except to say that eventually Masato finds his other uncle, Wee (Mark Lee) and through Wee he uncovers the family history and answers to some of the puzzles that are in his mother’s scrapbook/diary. Ramen Shop is a family melodrama and in some ways a quite conventional film narrative, but alongside the food angle it has one other important narrative line. Masato’s mother’s family suffered Occupation by Japanese forces in 1942 with various consequences. Masato learns about the War through a visit to a museum in Singapore. I was struck by this sequence, partly because I experienced something similar in New Zealand, in the National Museum in Wellington which at the time I visited was commemorating the New Zealand experiences of 1915 and the abortive landing of Anzac troops at Gallipoli. New Zealand troops suffered heavy losses and terrible conditions in the Gallipoli Campaign. I’ve always seen Winston Churchill as the villain in this instance, being reckless and risking high casualties in his support for the landings (as First Lord of the Admiralty). The Australians and New Zealanders took the events very seriously and Anzac Day is held annually to remember the fallen. As a Brit I felt humbled and shamed in that Museum. There is clearly a Singapore ‘folk memory’ of the Japanese Occupation and for younger Japanese I can imagine that taking on board the prosecution of the Occupation must be an uncomfortable aspect of modern history. There are still questions, I think, about how Japan has dealt with memories of the militarism of the 1930s and the subsequent wars in China and across South and South East Asia. It is ironic that at first Kazuo and Lian Mei must converse in English but I’m still not sure what to make of this. 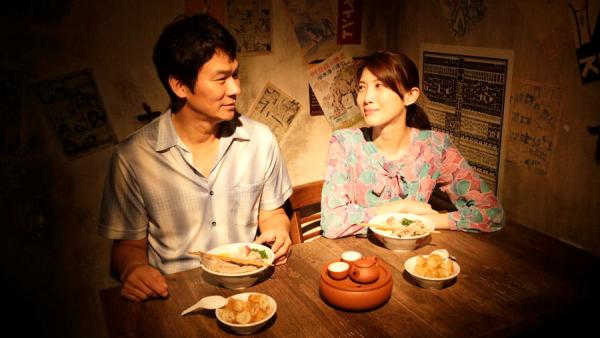 Father as a young man with Lian Mei

The search for authenticity in cooking both ramen and pork rib soup acts in the film as a way of exploring globalisation. Part of this is connected to the history of both ramen and pork rib soup which were introduced or more correctly popularised and ‘commodified’ at more or less the same time. Both were Chinese in origin. In Japan around the end of the nineteenth century when the Japanese industrial revolution was developing rapidly, the new army of industrial workers facing early starts and tiring days needed hot food available close to workplaces. ‘Chinese noodles’ in broth developed as a form of fast food with a distinctive method of ‘pulling’ noodle dough by hand and using a form of alkaline water to produce round yellow noodles. Various different forms of broth and meat and vegetables have been developed over time and now ramen are eaten in many parts of the world, famously becoming a staple of student life in their dried ‘cup noodle’ form, for cheap instant meals as well as a popular restaurant option. At the same late 19th century point in the exploitation of the potential of the British colonial possessions of Singapore and Malaya, the day labourers on the docks and in the warehouses of Singapore needed food for energy. The labourers were mainly Chinese migrant workers and the solution to the problem of developing a new ‘fast food’ was to import the idea of pork bone soup from Hokkien China (the region from which many migrants came). This proved successful and the Singapore dish of ‘Bak Kut Teh’ developed in which the soup is always accompanied by traditionally mashed Chinese tea. All of this is recognised in the film script and Masato comes to recognise what it means.

Ramen Shop has not been released in the UK but it has opened in North America and many parts of Europe as well as South-East and East Asia. ‘Ramen’ as such haven’t made the same kind of impact on British food culture, simply because, I think, of the competition from Indian, Italian and other cuisines. Chinese food in the UK was at first dominated by Cantonese cuisine as migrants were mainly from Hong Kong or Southern China. More recently Sichuan food seems to have become important. Has the UK missed out by not getting to see Ramen Shop? I found this an enjoyable and informative film. The script is written by two of Eric Khoo’s long-term collaborators, Tan Fong Chen and Wong Kim Hoh. I think these kind of food-focused stories tend to produce ‘feelgood’ endings and that’s the case here but there is enough drama to leaven the overall effect. Ramen Shop is currently available on MUBI in the UK and I would recommend it.