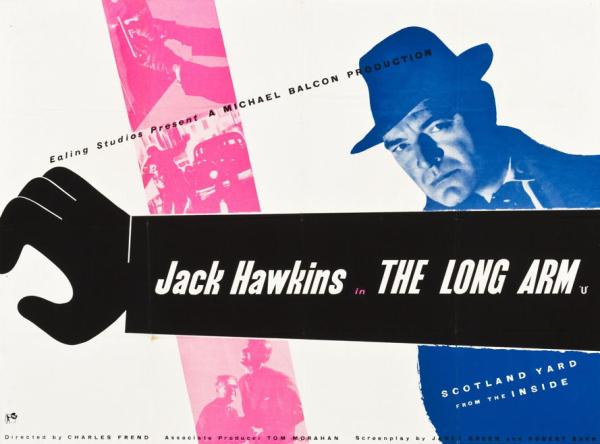 A few weeks ago I posted on John Ford’s Gideon’s Day (UK-US 1957) and mentioned Ealing’s The Long Arm as a reference point. The Long Arm turned up on Talking Pictures TV a little while later and offered an opportunity to make a comparison. In this film Jack Hawkins, a regular Ealing player in the 1950s, plays a Scotland Yard Superintendent – as he does in Gideon’s Day. However, the two films are quite different. The Ealing production was made in black and white and broadcast in Academy (1.37:1). IMDb suggests that this was always the intended ratio, even if widescreen was established in the UK by 1956. Unlike the Ford film, with its multiple cases all solved in a 24 hour period, The Long Arm is essentially a narrative about a single investigation spread over several days, perhaps weeks. The common features of the two films are the presence of Jack Hawkins and the family melodrama elements of the Superintendent’s home life. In Gideon’s Day that element is foregrounded by the romance of Gideon’s daughter which is cleverly interwoven with the day’s police action. In The Long Arm Superintendent Halliday’s young son does inadvertently provide his father with a clue that helps the investigation but the theme of romance (and the difficult life of a police officer’s wife) is displaced onto Halliday’s new assistant, DS Ward (John Stratton).

Halliday can’t call on computers in 1956 so he turns to the next best thing – Chief Superintendent Jim Malcom (Geoffrey Keen, right) with his card system and his own encyclopaedic memory memory of crimes in London

I’ll focus on The Long Arm and return to the comparison later on. The narrative is based on a story by Robert Barr which he adapted with Janet Green for The Long Arm. Barr was a remarkable man who worked in newspapers, radio and then television. He was a radio features writer in 1946 who took the opportunities offered by the re-launched TV service, writing one of the first TV documentaries, a report on Germany under Allied Occupation. He then began to move between non-fiction and drama, focusing on police operations in the UK and becoming something of an expert on Scotland Yard. The Long Arm was the first appearance of his work on film but he was soon to be successful writing for popular TV crime fiction series, mostly police procedurals. He worked on both Z-Cars and its successor Softly, Softly in the 1960s and 70s. Scan down the credits for The Long Arm and you will find Stratford Johns as a Police Constable. Johns would eventually become one of the main stars of Z-Cars and then Softly, Softly. Barr’s collaborator on The Long Arm was Janet Green who had been an actor in the 1930s and subsequently a screenwriter and playwright, writing first for Rank on The Clouded Yellow (1950), an excellent chase thriller, and on another intriguing crime fiction, Eyewitness (also in 1956). She would become best-known for her later scripts for the Basil Dearden-Michael Relph partnership on films such as Sapphire (1959) and Victim (1961). In 1966 Green would be one of the three writers on John Ford’s last feature,  7 Women. I mention these links partly to highlight Ealing’s role in providing blueprints for TV drama series, especially ‘cop shows’ and also the work of ex-Ealing staffers like Dearden and Relph after Ealing collapsed. 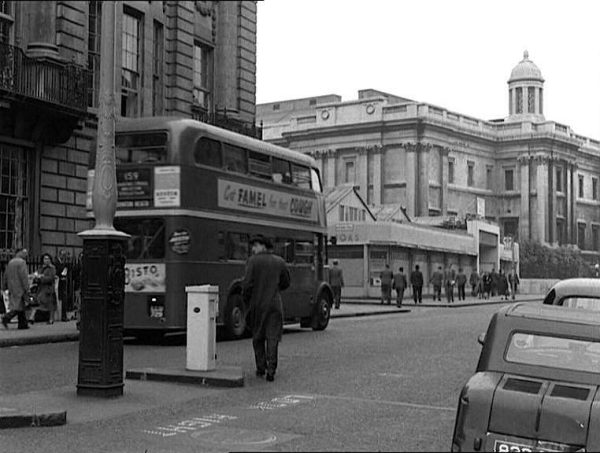 Following a suspect through Central London

The Long Arm was directed by Charles Frend, one of the central group of directors who made multiple films for Ealing. His thirteen films for Ealing comprise a diverse collection which includes major hits such as The Cruel Sea (1953), ‘prestige’ pictures such as Scott of the Antarctic (1948) and the children’s adventure The Magnet (1950). Frend’s reputation seems to have suffered a little since although he made some of Ealing’s best films he didn’t display the kinds of ‘personal vision’ beloved of the auteurists so he is not celebrated like Robert Hamer or Sandy Mackendrick.  Nor did he make any of the well-known Ealing comedies. His Ealing career ended with Barnacle Bill in 1957. This was in fact a comedy with Alec Guinness, but like his earlier comedy effort A Run For Your Money (1949), it is now largely forgotten. Instead, I would argue Frend’s most interesting films are San Demetrio London (1943) about an oil tanker miraculously surviving during the Battle of the Atlantic, The Cruel Sea (1953) and Lease of Life (1954).

The plot of The Long Arm pits Halliday against a clever criminal who manages to open the safes of various companies in Central London, the first of which is virtually under the noses of the police. The script is intelligent, though whether it is plausible is open to question. The investigation is thorough and eventually leads to a finale played out on the South Bank by the Royal Festival Hall, then only a few years old. More interesting for me was to see the British European Airways Terminal close by. In the 1950s both BEA and BOAC had check-in buildings in the centre of London and BEA used the ‘Waterloo Airline Terminal’ between 1953 and 1957. The Long Arm was Ealing’s second police-focused drama following The Blue Lamp (1950). That film featured ‘beat bobbies’ and exciting car chases in what was also a ‘social problem’ drama dealing with younger and more reckless criminals. Gordon Dines photographed both films, but The Long Arm features a more ‘opened out’ investigation which takes Halliday out of London, visiting North Wales, and as well as featuring familiar Central London streets it includes Halliday’s home in a quiet street in Bromley.

So what does this all add up to and how does it compare to Ford’s film a year later? Jack Hawkins gives a very strong performance in both films but The Long Arm suffers from weaker roles for women. Despite the modernist poster at the head of this blog post, The Long Arm feels tired and already old-fashioned next to Gideon’s Day. On the other hand it is a proper investigation and in some ways it does indeed resemble the later TV police procedurals. Some crime fiction film fans try to promote it as an example of ‘British noir‘, but I can’t accept that label. There are plenty of night-time scenes but little else that is recognisable as part of the noir crime film repertoire. It is an acceptable Ealing ‘entertainment’ and it points towards later TV cop shows.