This film narrative begins with a long shot of a container ship moving at a good speed through a wide river passage. In a wooded area close to the river a woman discovers something which after investigation and careful scraping away of soil reveals two skeletons side by side. A cut takes us to a close-up of a man picking chanterelles, wild mushrooms, in the woods. The man’s rather tattered clothes and the introduction of non-diegetic music  – a harpsichord or a dulcimer? – suggests an earlier time. The man is ‘Cookie’ (John Magaro), hired by a bunch of unkempt trappers to keep them fed, partly through his foraging. A little later he finds a naked Chinese man in the woods. Unlike the squabbling trappers Cookie seems a kindly soul who gives the Chinese man a blanket, and food and drink and hides him from the trappers.

With this opening, writer-director-editor Kelly Reichardt and her writing partner Jon Raymond, whose novel they adapt, raise any number of intriguing questions about American history, myth-making, the concept of the Western narrative and also the writing of those narratives about ‘discovery’ and the early attempts by Europeans to live alongside indigenous peoples and other migrants in the North West of what would later become the United States. They don’t directly tell us when or where this long flashback is set but if we know their previous collaborations such as the feminist Western Meek’s Cutoff (US 2010), we might reasonably assume that this is ‘Oregon Country’ a large area being exploited mostly for beaver pelts by both British and American interests. Raymond’s novel Half Life (2004) confirms that this is the setting. The time is the 1820s but I’m not sure how learned that.

After aiding the the Chinese man, King-Lu (Orion Lee), Cookie doesn’t see him again for some time but then he meets him again in the ramshackle settlement known as ‘Fort Tilikum’. King-Lu has somehow acquired a shack and he invites Cookie to visit. Soon the two men settle in together, learning a little about each other’s background. ‘Cookie’ is a skilled baker who dreams of owning a hotel and bakery in San Francisco. King-Lu is from North China and has travelled the world. Both have heard that this is the land of abundance and they discuss ways in which to make their fortunes. King-Lu is the more bullish but Cookie has the skills to make baked goods that would sell very well in the settlement – like ‘hot cakes’ in fact. The key to possible success is the ‘first cow’, a beautiful dairy cow that has been brought to the nearby grand residence of the ‘Chief Factor’. Played by Toby Jones this character and his main employee Lloyd (Ewen Bremner) represent the English/Scottish influence in the area. ‘Factor’ is the Scots word for someone who acts as the agent of a large landowner. It was also a word used to describe the entrepreneurs who were wheeler-dealers in the lands controlled by the Hudson’s Bay company, the main power in Oregon at this time. (Much of this background is also explored in The Sisters Brothers (France-Belgium 2018), though some twenty-five years later when the ‘Oregon Territory’ is being developed.) 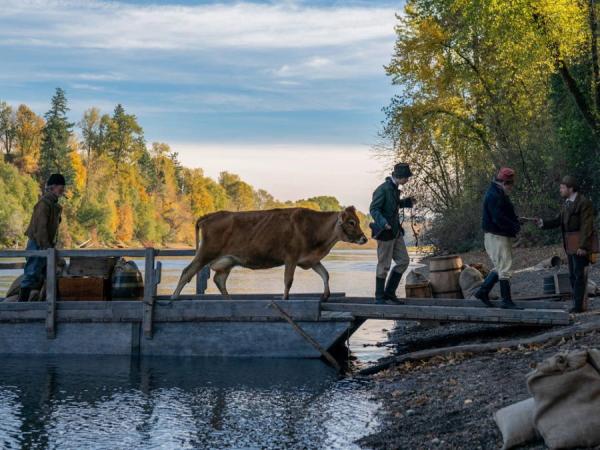 The cow arrives by boat

The Chief Factor has bought the cow, the first to be seen in the area, to improve his hospitality but unfortunately the bull and calf that accompanied it died during shipment. Cookie declares that if he had access to milk he could bake anything, not just ‘flour and water bread’. Here could be the two men’s golden chance. But how will he and King-Lu get the milk? That’s basically the rest of the plot and you can probably work out what happens.

First Cow is a long film (122 mins), especially given the rather thin plot. It’s shot in the squarish Academy format that had mainly disappeared from American film production by the mid-1950s, certainly from ‘studio productions’ (but which Reichardt used in Meek’s Cutoff). Much of the film takes place in the murky world of interiors with candlelight or in the woods at night. For audiences more used to high key action pictures it must be a trial to watch. Toby Jones and Ewen Bremner are likely to be the only actors UK audiences will recognise, although the woman seen in the short opening sequence is Alia Shawkat, who has featured in many US TV series and independent films. The same is true of John Magaro and Orion Lee. Other actors, like the creative team may have been part of other Kelly Reichardt productions. There are three kinds of responses to the film: bewilderment and professed boredom from mainstream cinemagoers, a feeling that this isn’t the best of Reichardt’s work by some critics and acclaim by those who feel she has once again offered a unique and cogent statement about American culture. I’m with the last group and I would bracket her with Debra Granik as my two favourite US auteurs. I expect Chloe Zhao will join them when I’ve seen more of her films.

Toby Jones as the Chief Factor

Much of the discussion about the film is around concepts of naïvete, mythmaking and critiques of capitalism. It’s an interesting time to discuss these concepts alongside the fate of indigenous peoples and the assimilation of migrants in the expanding United States. The two central characters are both likeable men. They don’t mean harm to anyone, they just want to make something of themselves. They don’t realise that this ‘Eden’ or ‘land of opportunity’ is (a) the homeland of local North American peoples and (b) that Eden has already been corrupted by the early capitalist exploitation of the Hudson Bay Company, the rapacious agent of British colonialism. There is no going back, the indigenous people are being killed by European diseases, the local beaver population is being decimated by trapping and there is no law as yet. I was reminded of various Westerns, set later. Those in the North West like Altman’s McCabe & Mrs Miller (1971) which shares an actor with First Cow, René Auberjonois, and Michael Winterbottom’s Hardy adaptation, The Claim (UK-Canada 2000). Both these films share a sense of European miners and other migrants, but they also feature European women. First Cow has no lead female roles but there are many scenes when indigenous women are silently in the background. The one sequence in which there is dialogue is that between the Chief Factor’s wife and the wife of an indigenous man. The Chief Factor’s wife is played by Lily Gladstone, the actor with Native American heritage who also appears in a key role in Reichardt’s previous film, Certain Women (2016). I’m not sure yet what this presentation of indigenous women really means in this film, except that it was the European men who messed things up first. But were the European  women who followed complicit? And we mustn’t forget the presence of the East Asian men.

I’ve seen some reviews which don’t accept that First Cow is a Western at all. I would disagree. I know Western scholars tend to see the key period setting for the genre as 1865-1895, but the underlying themes of the Western run across the whole development of the United States and across those of the other nation states with similar human and physical geography. First Cow is a wonderful addition to the history of the Western and it prompts me to think about a whole series of other Westerns which I’ll get to at some point. The film has been acquired for UK distribution by MUBI which should see some cinema screenings and then availability on MUBI’s screening service. Not to be missed!