The beauty of Kashmir

Independent films set in Jammu and Kashmir seem to be appearing more often on the festival circuit. This is an unusual film that draws inspiration from various sources. It presents a folkloric tale in a modern context with a narrative divided into seven chapters, each titled with a song. The songs are from a variety of sources around the Himalayan region and the film is influenced by Sufism. The focus is on a community of shepherds who range across a wide area from Northern India and Kashmir and Ladakh to Pakistan and Afghanistan. Now recognised as a ‘scheduled tribe’ in India, the Bakarwali are Muslims. As is common in South Asia, they are also seen as part of a bigger group that includes Gujjars, more associated with North Indian states such as Rajasthan. The writer-director of the film is Pushpendra Singh. He was born in Agra and attended FTII in Pune, initially training as an actor but later moving into direction and this is his fourth feature which premiered at the Berlinale in 2020 and was shown in festivals in Calcutta and Kerala before lockdown denied an expected run in PVR multiplexes. The director was able to introduce his film and to offer a Q&A at Borderlines.

He explains how the original idea came about:

I had read the folktale in 2010 and was fascinated that Vijaydan Detha [a well-known Marxist writer from Rajasthan] wrote a feminist story in the late 1960s which also dealt with desire and exploitation and how a woman in a conservative feudal society asserts herself and makes her own choices. The idea to adapt it to contemporary times was also a strong drive to choose the subject. (Quoted in a Variety piece by Naman Ramachandran, 26 November 2020)

Pushpendra Singh decided to rework the story in a contemporary political context by locating it in Kashmir and he also decided to take inspiration from the the poetry of 14th century Kashmiri mystic Lalleshwari, also known as Lalla or Lal Ded.

The Barkarwali are nomadic shepherds and goatherds who practice annual transhumance, taking their flocks up into the Himalayas in the summer months and returning to bed down in the winter. Their traditions don’t recognise boundaries, but in the contested territory of Kashmir they find themselves being harried by Indian security officials who demand more stringent forms of identity. This is personalised when, during the summer move, the shepherd Tanvir finds a bride in the form of Laila. Tradition demands that he show his strength as a future husband and then ask for her hand. It is when the group return from the mountains that they realise how much has changed. Tanvir is accused of bringing a wife across the border illegally. The Barkarwali don’t recognise borders or ‘lines of control’ – or at least they pay them lip service – but the local police chief demands that they get proper ID cards. He also has designs on Laila. She will have none of it. Both the crossing borders and the potential ‘possession’ of Laila are metaphors for the control of Kashmir as well as male power directed towards women. 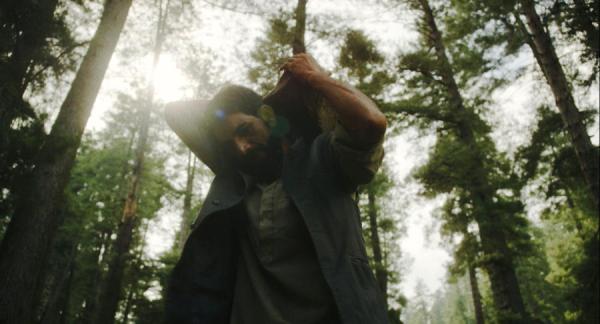 Tanvir demonstrates his strength . . . but he can’t control Laila

The narrative then moves into a kind of folklore farce. The police chief’s assistant Mushtaq assures his boss that he can ‘tame’ Laila and bring her to his chief. Or does he simply want her for himself? She is quite prepared to play a game, but only on her own terms and leads the men on, fooling her husband and frustrating Mushtaq. The Seven Songs take us through the stages of a kind of marital comedy. The folklore elements also produce moments of symbolism. A large tree bursts into flame from a gaping hole in the trunk as a sexual symbol. The end of the film makes a dramatic reference to the 14th century poet and the clear inference is that Laila will not accept the identities that men attempt to force upon her.

The film is very beautiful and I wish I knew more about the music. Navjot Randhawa gives a strong performance as Laila. Most of the other performers are local and non-professional apart from Shahnawaz Bhat who has appeared in other films. I’m not sure if the film has got UK distribution, but if it does appear it is recommended.