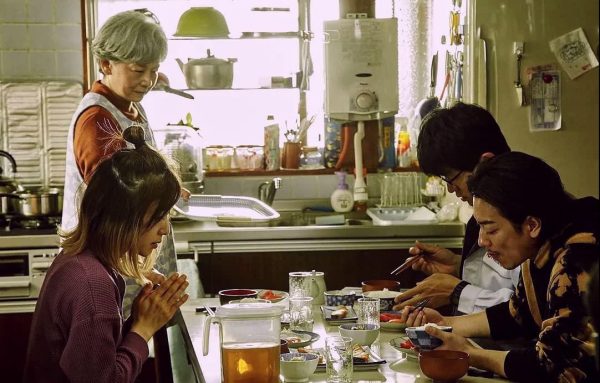 The family re-united at mealtimes

Following Miyamoto, I was surprised to discover that my second Japan Foundation film was also concerned with violent abuse. The two films have some other elements in common as well but in other ways they are quite different. This is a CinemaScope family melodrama from one of Japan’s oldest studios Nikkatsu. The Inamura family at its centre runs a taxi business on the outskirts of the Tokyo region. The narrative opens in 2014 and three teenage children are all terrified of their abusive father. When their mother appears she feeds them rice balls and then tells them she has just driven into their father and killed him, hoping to save her children from more abuse. Almost before they have fully grasped the situation she announces that she is going to turn herself in to the police and that she will go to prison. She promises to return in 15 years, adding that their uncle will take over the business. Fifteen years later she does indeed return and her old employees are pleased to see her back. The three children have mixed responses.

In some ways this film felt familiar. I remembered the melodramas of Nomura Yoshitaro from the 1960s and 1970s which showed at the Bradford International Film Festival in 2014 and I think there are some links in terms of ‘tone’ and feel. Reading the helpful review of the film by Hayley Scanlon, I understand that this type of melodrama might be termed hahamono or ‘mother film’/ ‘film about maternal love’ and that there is an interesting broader discussion of how this categorisation developed in Japanese cinema, seemingly from the 1950s onwards. In this film, mother ‘left’ after telling her children that they were now ‘free’ to live their lives as they wished but not surprisingly perhaps they have each so far ‘failed’ in one way or another. Consequently mother’s return prompts a range of responses. I don’t want to spoil the narrative surprises so I’ll just make more general observations. The melodrama extends beyond the nuclear family group in a number of ways. In particular the office manager imagines herself into a similar situation as the mother and a second subplot involves a new driver the company takes on, a man who eventually reveals that he has a son from his failed marriage and who becomes disturbed after meeting the young man. I’m not sure whether these extra two story strands strengthen the central story or whether they are superfluous. One of the strands adds to the dramatic finale, but I wonder if a tighter script could cut them out and actually produce a stronger and shorter film? On reflection, I think that they are recognisable as melodrama elements that point towards social issues – women as carers and the possible consequences of divorce and separation.

A more expressionist shot of mother, isolated on her return

The new driver meets his son – there is a lot of eating in this film!

I’ve called the film a melodrama because of the high emotional content and because of the family inter-relationships. In terms of style, however, I don’t remember the music particularly and the camerawork has been described by other commentators as ‘gritty’ and ‘realistic’. Again it didn’t seem noticeably so to me apart from occasional shots such as that of the mother above. But it often seems to be raining heavily and two of the characters have familiar afflictions, Daiki the older son has a stammer and his sister Sonoko has fallen back on excessive drinking. The younger brother Yuji has problems that are more internalised. There are flashbacks to the father’s abuse and these are not conventionally signalled but often occur in what are otherwise routine sequences. This is a way of disrupting the narrative which seemingly represents what is going through a character’s mind. The family house is a jumble of rooms that more or less merge into the taxi company’s offices and another aspect of the film is an almost procedural study of the running of the taxi business. I wasn’t surprised to discover that director Shiraishi Kazuya has made films in various genres, including one labelled a ‘docudrama’. One Night appears to be adapted by Takahashi Izumi from a 2011 play by Kuwabara Yuko and it is noticeable that many of the scenes focus on the taxi company offices and living quarters. That isn’t to say that the narrative does not move outside and I was pleased to see some different kinds of location, including the ferry port at Oarai which offers passage to Hokkaido.

I enjoyed the film on several levels. The performances are very good and I like the ensemble feel of the taxi company. I think UK audiences might recognise Matsuoka Mayu who starred in Shoplifters (2018) as well as Satō Takeru from the Rurôni Kenshin films. The mother is played by Tanaka Yûko. She’s very good and a calm centre in the midst of chaos. There are many plot details that I haven’t covered here and overall I found this to be quite a ‘meaty’ narrative: there is plenty to get your teeth into and a lot of eating. Look out for more Japan Foundation films next week.