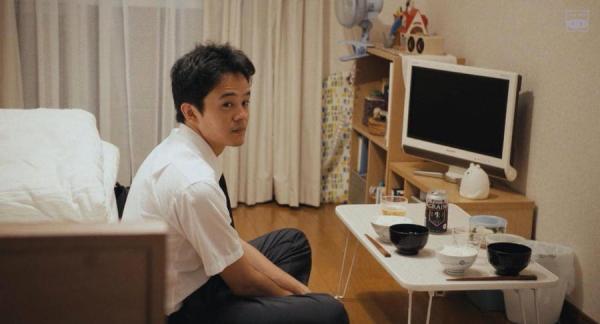 Miyamoto the salaryman invited to eat with Yasuko

Miyamoto is the first film I managed to book for this year’s Japan Foundation Film tour. The festival is online with free screenings, most of which sold out within an hour or two of becoming available, but I think there are still some films available as repeat screenings. Miyamoto is listed on IMDb as ‘From Miyamoto to You’ and I can see why they have simplified the title. Miyamoto Hiroshi (Ikematsu Sôsuke) is the central character of the film, which has been adapted from a section of a 1990s manga that became a TV series in 2018. Seinen manga like this are aimed at older teenage boys and adult men. I think various cast members in the film are carried over from the TV series. Miyamoto is a stationery salesman, a slender young man and a familiar ‘salaryman’ figure. The film narrative is nonlinear and begins with a meeting between an injured Miyamoto facing his angry boss and explaining how he got into a fight. The narrative will soon move into a long flashback and eventually resolve itself in the present. The beginning of the story is a meeting between Miyamoto and a slightly older woman, Yasuko (Aoi Yu), whom he presumably knows from a sales visit to her office. Yasuko invites him to eat with her in her apartment but the meal is interrupted by Yasuko’s drunken ex-boyfriend. At this point we are wondering if the interruption will lead to the fight which caused Miyamoto’s injuries. I won’t describe all the ins and outs of the plotting, which I did find intriguing. Instead I want to explore different aspects of the film.

The injured Miyamoto takes Yasuko home to meet his parents

Plied with beer by Yasuko’s mother, Miyamoto passes out

I’m not sure how much updating of the original story has taken place since the 1990s. Japan has a history of patriarchal attitudes to work culture and after work drinking. Men would work late and then drink  to excess and abuse women unlucky enough to meet them. Have things changed much in the last twenty to thirty years? Miyamoto is constantly feeling he has to assert his masculinity and the result is usually that he collapses into a stupor after drinking too much or he says and does rash things in a spirit of bravado. The irony is that he is physically not well equipped to do either. This film includes several violent fights and some violent and abusive moves against women. When Miyamoto and Yasuko eventually get together they visit both sets of parents. The film didn’t seem to me to identify the location of the two sets of parents, but I read a review which suggests that in the manga, her parents are in Hokkaido and his in Yokohama. During both visits Miyamoto and Yasuko make an odd couple who manage to be both polite and disruptive in the calm lives of the parents. The trips outside Tokyo also provide an opportunity for indications that there is a form of romance developing and that they might survive as a couple.

Director Mariko Tetsuya has developed an international reputation as a creator of violent films, often developing out of domestic situations. His 2016 film Desperate Babies is still being debated and a Harvard Film Archive event a year ago was titled ‘Self-Destruction Cinema: The Films of Mariko Tetsuya‘. Anyone who has seen his earlier films would know what to expect from Miyamoto but I was taken aback by some of the violence, including that against Yasuko. Miyamoto himself becomes involved with an amateur rugby team made up of some of his customers. There are some very big guys in the team and Miyamoto is no match for them, but he doesn’t give up. So is this just drunkenness and thuggery? I don’t think so. There is some humour and humanity and though I don’t condone any male violence towards women, Yasuko is not defenceless or passive. I should also note that there are two sexual encounters, one of which is violent but the other is carefully shot to be explicit but also within those boundaries in Japan about not showing genitalia. The music in the film is also important, seemingly ‘punkish’ at some points.

A love scene both ‘tasteful’ and explicit

Ikematsu Sôsuke as Miyamoto won a major Japanese prize, the Kinema Junpo Best Actor Award in 2020. It is certainly a startling performance which I think may be seen ‘extreme’ by audiences in the West in several scenes. I did find some scenes made me uncomfortable but I recognise that they fitted with the character. This film is likely to remain as a niche or cult film in the West but I think it is recognisable as a familiar Japanese melodrama with the traditional characters of a salaryman and his prospective wife, the visits to the parents and the excessive drinking in small bars and as part of family gatherings. Yasuko’s mother seems to regard Miyamoto’s attempts to drink beer fast as ‘heroic’. Take out the violence and the narrative could work in an Ozu melodrama (with bigger parts for the parents). Mariko is an intriguing director and I would watch another of his films. The trailer below (no subtitles) gives away SPOILER plot points but it illustrates the film’s uncompromising style.