Waiting at Northolt for the opportunity to join the battle . . .

In 2018, two Polish-UK co-productions about the Polish aircrews who fought in the Battle of Britain in 1940 were released. 303 Squadron is the Polish ‘majority production’ directed by Denis Delic with a predominantly Polish cast and all-Polish crew. Hurricane is a similar UK majority production covering much of the same ground. Why these two productions competed and came out in 2018 is a question that I can’t answer at this point. I am interested in this specific film for three reasons. My general interest is in non-UK productions which deal with UK-based events. Most such films are American, usually with significant British involvement but some of the best such productions are French in my view. Most of the others suffer in various ways from unfamiliarity with language and culture. I have a special interest in this particular story because I was at school with with several sons of Polish fathers who had been stationed locally during the Second World War. Finally, I welcome the film(s) because, if nothing else, they refute the populist flag-waving of current right-wing British politicians about the glorious history of “Britain standing alone” in 1940.

303 Squadron is based on a non-fiction book by Arkady Fiedler which was circulated in Poland during the German Occupation. Fiedler was a successful writer who was allowed to be ‘resident’ with the Polish airmen of 303 Squadron at Northolt in 1940 and he must have been one of the first ’embedded’ writers on war-time operations. The book was published in the UK in 1942 and reached Poland, circulating clandestinely, in 1943. Reports suggest that it did much to raise morale in the Polish underground and the population generally. The ‘Making Of’ film on the Blu-ray I watched of 303 Squadron includes a comment by Fiedler’s son who says his father would have been delighted by the adaptation because he thought it was his most important book.

‘303 Squadron’ was formed in Blackpool in 1940 from Polish airman who had escaped, travelling across Europe, after the fall of Poland in 1939. (Blackpool was a major RAF centre and the ‘receiving point’ for the Polish Air Force or PAF.) The Polish contingent was arguably the largest of the various groups of European military personnel who made it to the UK. In 1940 there were 8,000 Polish airmen. Eventually the total reached 17,000 personnel (I don’t know how many women there might have been). Once ready to begin training on Hurricanes, the squadron moved to Northolt (in the present day London Borough of Ealing) in early August. It did not join the Battle of Britain until the end of August. Even so, they became the most successful of the 71 squadrons of the RAF engaged in the battle. The Polish airman were all very experienced flyers but not of the modern aircraft, the Hurricane, or of British procedures, especially the use of radar and the whole sophisticated air defence system (which required the flyers to learn enough operational English). The film makes much of the waiting and frustration experienced by the pilots and the British reluctance to use them in battle before training was completed – which of course makes a good story when the Poles were able to demonstrate just how effective they could be. In reality, there were many debates about how the battle should be fought as well as several difficulties associated with what was a truly international defence force comprising various other European groups as well as significant numbers of Canadians and other ‘Empire’ flyers. (There have been other Battle of Britain films produced from outside the UK including Dark Blue World, Czech Republic 2001). There are many myths about the Battle of Britain but the one salient point is that British aircraft production was highly prolific by September 1940 and was quite capable of supplying replacement aircraft for each one lost in battle. The problem was that it took longer to replace trained pilots than to build new planes. This is why all the pilots from other countries were so important – and eventually so much appreciated. However, given recent comments, perhaps their contribution to the war effort has been forgotten by some? 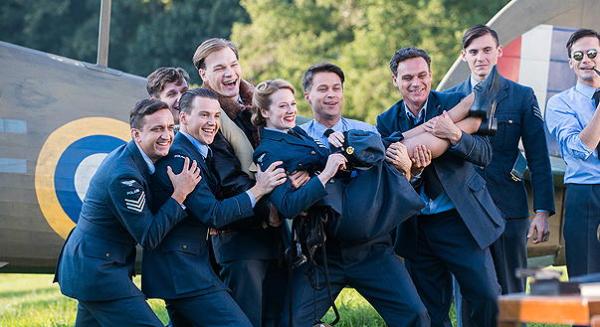 The exploits of the Polish airman were ideal propaganda material for the British press. Polish flyers also attracted a significant female fanbase.

The film narrative has some interesting aspects. The story starts pre-war and introduces a female aeronautical engineer in Poland and the escape of some Polish flyers via Romania. It also depicts a rivalry between a Polish and a German flyer at various airshows prior to 1939. This enables the narrative to include a German strand with an airfield close to the Channel in France so that a personal rivalry can be a focus between German and Polish flyers. As well as the aerial ‘dog fights’, the narrative includes a romance (attached to a sub-plot about the propaganda potential of Polish successes) and various comic interludes. The squadron had a couple of RAF officers attached as flight leaders and this allows some dramatic potential. But the ‘action’ is in the skies over Southern England and the channel.

The production problems for the film include the fact that only one wartime Hurricane was still available to fly and other original aircraft types were similarly scarce. The dog fights are therefore produced via CGI. The British and Canadian characters are played by perfectly acceptable actors and the dialogue is not that bad (most of the film is in English with some subtitled exchanges in Polish and German). The main problem with the film is that which is common to all the previous recent attempts to present reconstructions of the Battle of Britain. It is perfectly possible to present a ‘personal battle’ between a Hurricane and a Messerschmitt Bf109 but not to represent the reality of the whole operation. The Polish airmen made a huge contribution to the RAF’s firepower but the other British strength was the use of RDF (radar), early warning and the capacity to put huge numbers of fighters in the air at any one time and to direct them towards equally huge fleets of German bombers and fighter cover. We don’t see any of this. You have to go back to the early 1950s and films like Angels One Five (1952) and parts of Reach for the Sky (1956) to get an overall sense of the battle. Battle of Britain (1969) was the big budget ‘prestige’ version of the events. It is the most comprehensive in trying to cover every aspect of the battle (which lasted for nearly four months). I did see that film in the cinema but I was slightly underwhelmed. I had read about the aerial combats during my childhood and youth and I was probably hung up on realism at that point. IMDb reminds me that Battle of Britain‘s credits attempted to list all the nationalities flying in/with the RAF during the battle. So just to emphasise the scale, the RAF drew on two Polish and two Czech squadrons as well as including a host of other nationalities as members of mainly British squadrons. Northolt was a base with four squadrons in total, three of them Hurricane squadrons. As part of 11 Group, 303 Squadron was used on its own because the short notice for raiders coming in over the Channel didn’t allow the build-up of a so-called ‘Big Wing’ of fighter squadrons favoured by 12 Group further North in Duxford. Even so, the skies would have been busier than represented in 303 Squadron.

On the other hand, 303 Squadron is based on real events and almost everything in the film has some kind of link to the ‘real’ story. The young Polish actors are generally a handsome, dashing bunch and apart from some iffy music scoring, the film is technically well put together. It is an ‘uplifting’ story but very ‘gung ho’. The Poles, though experienced and skilled flyers were seen as possibly ‘reckless’ in their eagerness to engage the enemy. Even so they had relatively small losses of 7 killed, 5 seriously wounded – fewer than most British squadrons with much less flying experience. The importance of the film is the opportunity it affords young Poles to be aware of the country’s history. The film did well in Poland with 1.5 million admissions in cinemas. It is also important that British audiences (and the large numbers of Poles in the UK) get a chance to learn about this history. The film’s UK cinema release was not extensive but it is now available on many streaming sites and on DVD and Blu-ray (see ‘Just Watch).