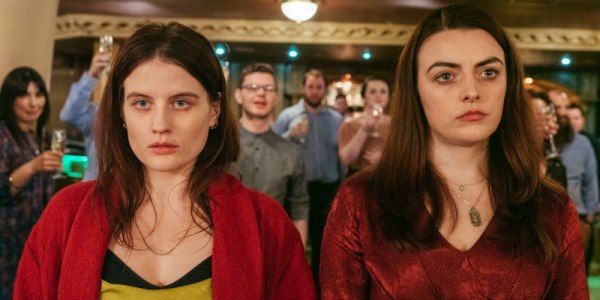 ‘Wildfire’ is a good title for this intense 84 minute drama/melodrama that tells a personal story carefully set in a political-cultural context, allowing a metaphor to remain visible in the flames. This is an ‘Irish’ film though it is officially an Ireland-UK co-production under an EU framework agreement. You won’t read too much about that anymore and instead the headlines will be about ‘borders’. Fortunately there is still some sanity about and the film has funding from the BFI, BBC and Channel 4 as well as other Irish and UK partners. It’s already listed as ‘coming soon’ on Film 4 so I hope it will get a wide audience.

Kelly is a young woman of around 30 who we meet on a ferry in the Irish Sea, about to return to Ireland after a year away. I’m not sure if she lands in the South or the North but either way she heads for the border and her home town. Her older sister Lauren has not seen her since she left without warning and this narrative ‘disturbance’ has profound effects on everyone, including Lauren’s partner Sean and the sisters’ aunt, Veronica. Kelly and Lauren have lost both parents in tragic circumstances and their mother’s death still seems mysterious to Kelly. The film opens with a montage of news clips that range from the ‘Troubles’ to ‘Brexit’ and the town is built around a river which straddles the border so that as children the girls would swim “in both countries” at once. 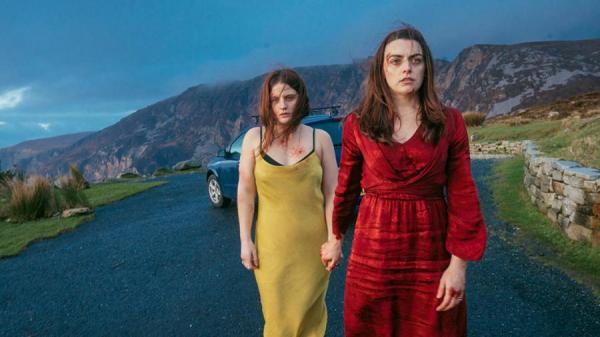 It’s not easy dealing with your shared past . . .

I’ve seen one review that pitches the film’s aesthetic as a tussle between “gritty social realism and magic realist melodrama” and that’s not a bad suggestion, though I would argue that social realism often uses melodrama and that Kelly’s hallucinatory moments could be read as the product of her psychological state. The same (Irish) reviewer writes: “We’re not great when it comes to dealing with grief, trauma and other mental health issues.” Given what succeeding generations in Ireland have suffered as a result of British colonial intervention over hundreds of years that’s not surprising. The promise of no borders, now seemingly to be broken by Johnson and his cronies, simply exacerbates the confusion over identity and the pain of broken lives.

It’s staggering that this is a début film by writer-director Cathy Brady who has previously received recognition for her short films. The strength of the film derives from the performances and direction and it is no surprise to discover that Brady and her two principals, played by Nika McGuigan and Nora-Jane Noonan, were able to create something so powerful through extensive workshops over a year of preparation. The film was a genuine co-production. It seems to have been made across the island of Ireland and I think that’s important. I didn’t recognise the area in which the town was located and perhaps that’s a good thing. Cathy Brady is listed as coming from Newry in Co. Down and so is Nika McGuigan, though her father, the boxer Barry McGuigan was born in Co. Monaghan. Tragically Nika died before the film completed post-production from a return of the cancer she first had as a young teenager. What a talent was lost on the basis of this performance. I realise looking through Nora-Jane Noonan’s credits that I must have seen her in several films. I might go back and look at the horror film The Descent (2005) which I remember using with students. Wildfire is very much a film about the sisters and often it’s the other female characters who they run up against. It’s always good to see Kate Dickie, here playing Aunt Veronica and in some ways the villain of the piece. The other female ‘presence’ is the mother (Olga Wehrly). Cathy Brady is supported in the production by some of the leading figures in the recent upsurge of independent films by European women. The film was shot by Crystel Fournier, cinematographer on the first three features by Céline Sciamma and Carlo Cresto-Dina, one of three producers on the film also acted as a producer on the first three features directed by Alice Rohrwacher. No wonder Cathy Brady is attracting a lot of interest.

I enjoyed this film very much. At moments I wanted to look away and shout ‘No!’ but that’s my problem because I was so engaged. I’ve read quite a few reviews of the film and I’m a bit fed up with reviewers who can’t cope with melodrama i.e. they think it is a bad thing and one refers to it as ‘silliness’. There are several reviews which argue that the film ‘loses its way’ in the final third. On the contrary it builds up to the finale we have been waiting for. In a key scene with no ‘scene-setting’, the sisters are in a bar dancing together wildly to Them with Van Morrison shouting his way through ‘G-L-O-R-I-A’. We already know that one of Kelly’s memories as a child was listening to her mother singing and dancing along to Van. From this point on there is no stopping. 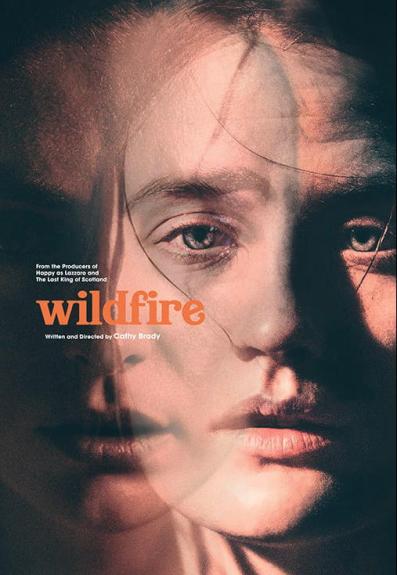 I hope my other picks for the festival are as good as this and I hope to catch the film again on Film 4 or, better still, in a cinema if I ever get into one again.