There are five portraits of Sophia Loren on this poster, including the one top right when she plays a nervous teenager at the beginning of the film.

It’s purely coincidence that over the last couple of weeks I’ve been entertained by Ava Gardner, Ingrid Bergman and now Sophia Loren. It’s also been a great pleasure. Marriage Italian Style is partly a follow-up to Vittorio De Sica’s Yesterday, Today and Tomorrow (Italy 1963) in that it stars Sophia Loren opposite Marcello Mastroianni. Like its predecessor it sold well overseas and received Oscar nominations. I note that though this was a Carlo Ponti production featuring his partner Sophia Loren, the Executive Producer was Joseph E. Levine, the American showman who did a great deal to introduce Italian popular cinema (and particularly Sophia Loren) to the UK and North America in the 1960s.

De Sica’s film is an adaptation of a Neapolitan play by the prolific actor/writer/director Eduardo De Filippo who made his own film adaptation in 1951 and it has also featured in other versions. The De Sica adaptation is the best known outside Italy. The plot is straightforward. During the the bombing of Naples prior to the Allied invasion of Italy in 1944, a wealthy local businessman, Domenico (Mastroianni) meets a terrified young woman Filumena (Loren). She will survive by becoming a prostitute for the next few years and Domenico will meet her again and decide to keep the contact going, eventually installing her in an apartment and finding her a job. Their secret relationship escalates further up to the point where he installs her in his own house, ostensibly as a maid/carer for his aged mother. He refuses to commit to marriage or to make the relationship public. The relationship lasts for 25 years in secret before Filumena hatches a plot to force a marriage. De Sica structures the narrative so that it starts at the point where Filumena launches her plan and then flashes back to 1944 and outlines the history. We then see what Filumena’s action provokes and this leads into the final act. 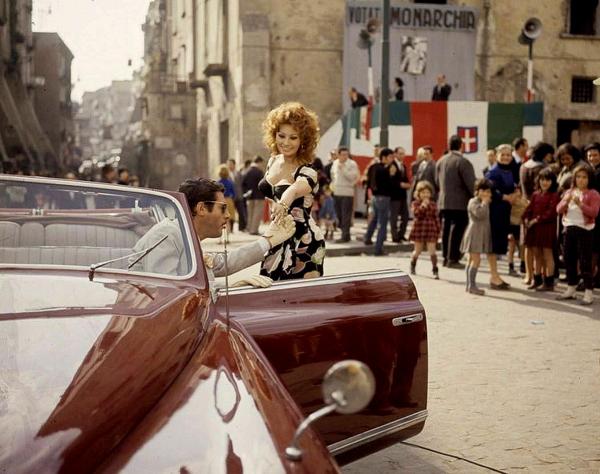 The couple meet in the street – this appears to be a photo showing the crowds who stop to watch the film being made.

In one sense this is a similar narrative to the Naples episode (‘Yesterday’) from the previous film from De Sica with Loren and Mastroianni, but it is much more challenging for the pair since they must age over 25 years. Loren was around 30 when she made the film and Mastroianni was 10 years older. Loren’s are the more obvious changes. At first, although I enjoyed the performances I wasn’t particularly entertained by the story and I struggled with the sexism – Domenico’s shocking treatment of his lover and the misogyny expressed towards Filumena. This is an integral part of of the narrative even though it is apparent to everyone that she is strong and capable and he is a weak but devious man. But as the narrative developed, I did warm to the characters including the housekeeper Rosalia (Tecla Scarano) and the chauffeur Alfredo (Aldo Puglisi) who become Filumena’s principal supporters. There are also certain scenes where De Sica seems to draw on his neorealist experiences in his presentation of Neapolitan street scenes and the changing landscapes of the city. I was particularly taken by a later scene in which Filumena has moved to a new block of flats built on a hill. When Domenico sees her from the road as she begins to descend a path, he rushes, panting, up the path to meet her. I suddenly felt that De Sica was saying something optimistic about their relationship and expressing it through his use of location. I was strangely reminded of some of Antonioni’s films and his use of cityscapes. 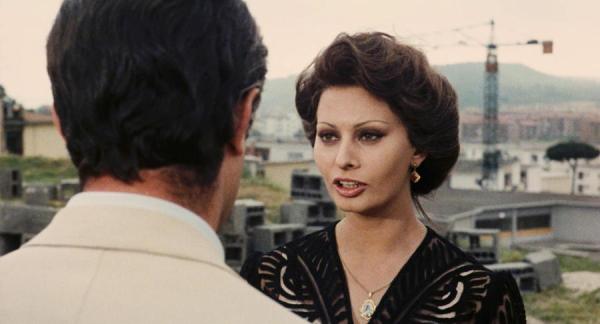 One of the later scenes when Loren is playing much older

The two leads were at their peak around this time. Marcello Mastrioanni looks perpetually worried or helpless when he is not attempting to look decisive. Sophia Loren is simply magnificent. The film is currently part of MUBI UK’s ‘Library’ offer. I think the print is sourced from Cult Films and a notice before the film start discusses dubbing, However the MUBI presentation is a film in Italian with English subtitles.