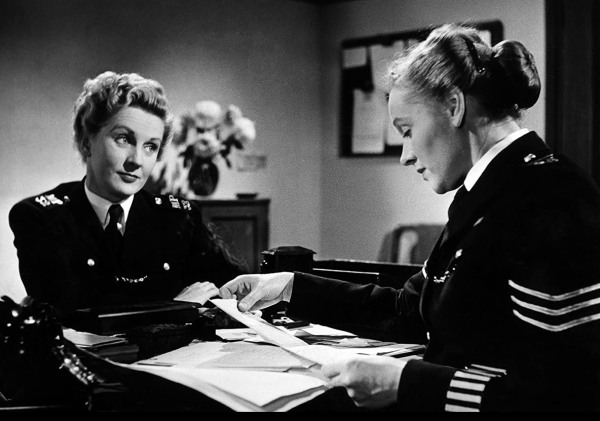 (Nick Lacey offers his view of this film in an earlier posting here.)

Street Corner was chosen last week by the cineaste Carol Morley for her Friday night online film club viewing. It was directed by Muriel Box and written by Muriel and her husband Sydney from an original idea by Jan Read. Since I’m keen to see Muriel Box films, I followed the link to a free streaming of the film. It’s an interesting film for several reasons. The semi-documentary style and focus on ‘social problems’ as dealt with by women police officers manages to combine elements from Gainsborough’s ‘social’ films of the 1940s (when Sydney ran the studio) and the range of social problem melodramas that appeared during the 1950s. The film also relates to a sub-genre about women in uniform such as The Gentle Sex (1943) about women in the forces in wartime or the munitions workers in overalls in Millions Like Us (1943) as well as Ealing’s later The Feminine Touch (1956) about student nurses in the NHS.

The three stories, which are interwoven in this procedural about four women working from Chelsea police station, each focus on an issue which seems to be particularly ‘suited’ to investigation by women. This reads very differently now but when “cops in skirts”, as the dialogue has it, first appeared, they were expected to deal with certain kinds of cases. One here is a child at risk from negligent and potentially abusive parents and the second is about a young woman who has gone AWOL from her WRAC posting. The third is about a young mother who is caught shoplifting and then seems to be falling into a classic ‘good-time girl’ narrative. This latter story is the most extended and leads into a familiar crime story about a bungled robbery and its aftermath. The Monthly Film Bulletin review at the time is rather ‘sniffy’ and refers to what it calls ‘The Blue Lamp formula’. I think the film has some saving graces but I have to agree that the four women do appear to “have the makings of a good hockey team”. They seem very middle-class. 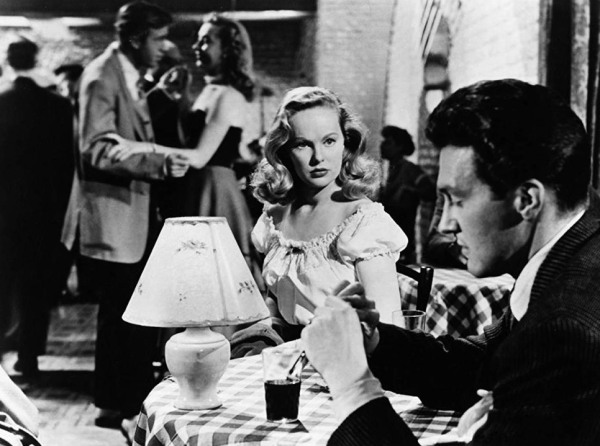 The main problem for the film, which is technically very good in its use of location work by Box’s long-term collaborator Reginald Wyer, is that attitudes towards women and police work have changed so much since 1953. It’s also quite disconcerting that the cast is awash with actors who would later become very well known in British film and TV. I’ll name some of them here but there are many others. Fans of the sitcom Porridge will be amused to see a young Brian Wilde, already ‘typed’ as a worried man. In many scenes, that woman in the background or at the front desk in the police station will be Dandy Nichols, Thora Hird or Dora Bryan. Terence Morgan is typed as the wide boy/spiv jewel thief, aided and abetted by Michael Medwin in painted ties and light-coloured suits. Michael Hordern appears as a rather bemused Detective Inspector with Maigret pipe. But it’s the female leads who provide the flavour of the narrative.

Anne Crawford was well-known for her upper middle-class roles in both Millions Like Us (slumming it until Eric Portman as a factory foreman sorted her out) and They Were Sisters (1945). Here she is still recognisable as an older WPC. Rosamund John who featured in The Gentle Sex is the efficient Sergeant and Barbara Murray is the younger and more sophisticated WPC, caught in a posh dress shop trying on hats when she spies a suspect. To be fair all the action is around Knightsbridge and Chelsea. The fourth woman is the plain clothes WDC played by Sarah Lawson. Eleanor Summerfield has rather a thankless role as the WRAC but she does well and Peggy Cummins plays the would-be ‘Good-Time Girl’ (the subject of the Gainsborough film with that title featuring Jean Kent in 1948). At one point the Peggy Cummins character is in a nightclub (see above) which a police inspector later identifies as a place where “escaped girls from Approved Schools hang out” – a direct reference to the earlier film (which Muriel Box co-wrote). 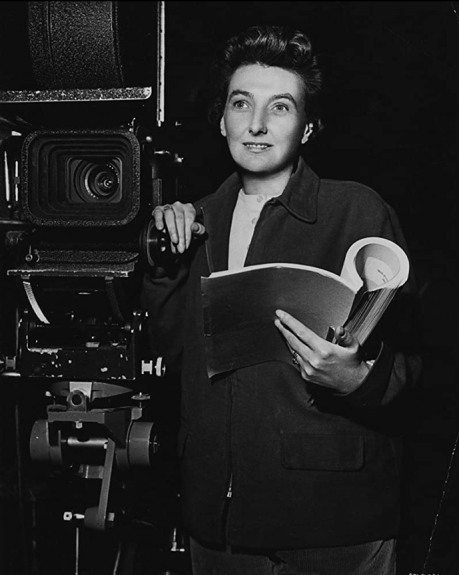 Muriel Box early in her career

Street Corner is credited as a production of London Independent Producers and made at the ‘Gate Studios, Elstree’. But the film is distributed by GFD (General Film Distributors), the distribution arm of the J. Arthur Rank Organisation. The Gate Studio was a single sound stage bought by Rank in 1950 with the intention of making religious films. Sydney Box decided to go independent when Gainsborough closed but he initially needed Rank for distribution. Muriel Box directed three films for the new company before working on films for other producers. She was in many ways the most prolific woman, as both writer and director, in the British film industry during the studio period.

I’m not sure what to make of Street Corner. It’s lively with some very good action sequences and I found it easy and enjoyable to watch. My main complaint is about the tone of the four women police officers. Rosamund John apart, the other three sound like head prefects talking down to younger girls who should know better. I’m surprised at this because the Boxes had great experience with social issue pictures and working-class characters at Gainsborough and before that for Sydney’s Verity Films. It occurs to me that perhaps the portrayals are realist in terms of the kinds of women who were recruited by the police in the late 1940s and early 1950s. The Metropolitan Police was the biggest employer of women officers of all police forces but still had only around 200 women who were given specific roles and segregated from male officers in terms of ranks and facilities until the 1970s and the Equality Laws of the period. The Met is thanked for its co-operation in making the film on the credits. Certainly the film is important not just as a film directed by a woman in the early 1950s but also because of its depiction of working women, using their intelligence, bravery and range of skills in capturing criminals and resolving some social problems. The film was re-titled for the US market (possibly to avoid confusion with an earlier film titled Street Corner). But Both Sides of the Law is not a good title for me – it implies possible police corruption.