This year’s ¡Viva! Festival of Spanish and Latin American Cinema at HOME in Manchester has been interrupted by the coronavirus pandemic and HOME has closed. We’ve been privileged to have reported on many previous ¡Viva! festivals and we were all set to visit the second week of the festival. Fortunately, thanks to the festival organisers, we are able to bring you at least a few reports on the films screened.

A Thief’s Daughter was the opening film of the festival. It’s the début feature of Catalan writer-director Belén Funes and the festival brochure namechecks both Ken Loach and the Dardenne Brothers as reference points. Certainly this is a social realist narrative and its central character is Sara a young woman in her early twenties in a working-class district of Barcelona. It has that mixture of family melodrama and an exploration of ‘precarity’ that is familiar from the two recent Ken Loach-Paul Laverty films, but I think other aspects of the film are different. Funes appears to belong to the ‘show, don’t tell’ school of storytellers. It therefore takes some time to work out all the relationships in the film and the problems that Sara faces.

Each meeting of father and daughter is mini-drama in itself

We first meet Sara working as a cleaner, but we see that she is attempting to find other work. She has an infant son Joel who seems to be left each day with either Sara’ room-mate with or with Flora, an older woman who runs a bar (where Sara sometimes works). Dani is the young man who we assume may be Joel’s father but though he does look after Joel on occasions he doesn’t appear to want to be with Sara – something she regrets. But as the film’s title implies, the narrative conflict is generated by the return of Sara’s father from prison. Father and daughter have been apart for some time and Sara is in two minds as to whether she misses him, needs his support or wants him out of her life completely. The current cause of the rift is Sara’s young brother, Martín, a 7 year-old with an injured foot who appears to be living in some form of children’s home. (The family details are actually quite complicated with hints dropped here and there but not fully spelt out.)

Sara herself is also in some form of public housing facility and it is time limited, presumably on the basis that she needs support until she has settled employment and Joel’s care is sorted out. This lack of detail about welfare services is one of the main differences between this film and Loachian social realism. Funes does not generate a critique of Spanish welfare services, or of employers. Sara is generally treated with efficiency and courtesy. She has several different jobs that we either see or hear about and eventually finds a good job in a school/college catering team. At this point a couple of clues emerge that suggest that her education was interrupted. During a formal interview she struggles to articulate answers to standard questions even though her work displays her intelligence and diligence. Sara has a hearing aid and again there is no explanation for this. Does she have a congenital condition or was her hearing damaged in an accident? There are some suggestions that perhaps her father was violent towards her some years earlier. All of these questions come together in the final scenes when Sara attends a family court hearing in which she applies to become her brother’s guardian and therefore to recreate a family in which her father loses control over Martín. There is no easy resolution to the narrative and I found the final scenes very moving and quite shocking. Again the court officials and the two advocates are not presented as uncaring, but we do get to appreciate how ill-prepared poor Sara is. 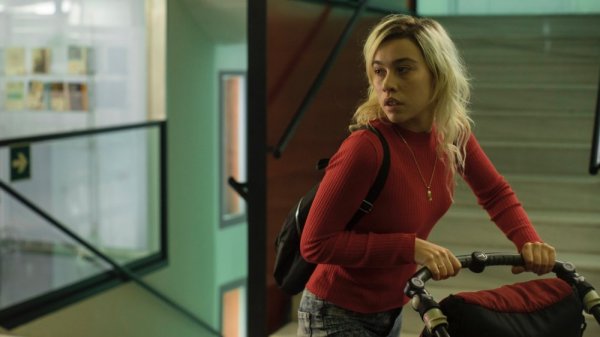 Sara is always on the move – between jobs and childcare

A Thief’s Daughter is a form of anti-melodrama. This is certainly a drama of family relationships but it is presented without any obvious forms of ‘excess’. Although there are moments of diegetic music, there is no music score as such (or perhaps I didn’t notice a score?). Mainly the drama is played out with only direct sound. The mise en scène is primarily functional, showing the action and again I didn’t notice much in the way of expressionist camerawork or editing. This is not to say that the film is dull to watch and Neus Ollé as cinematographer and Bernat Aragonés as editor are experienced filmmakers who serve the narrative well. The performances are very good. Sara and her father are played by the real life father-daughter pairing of Greta and Eduard Fernández. They have played together before and Eduard is a very experienced actor. I have seen him before in previous ¡Viva! films including Marsella (2014) and Truman (2015). On this occasion, Greta has taken centre stage and she shared the acting prize at San Sebastian with Nina Hoss. Overall, there is no heightened dramatic drive to the narrative. Instead we are invited to get to know Sara and to care for her, following her on various journeys and worrying about all the tasks she has to complete. Somehow the lack of any narrative devices to increase the tension and despair of the character (something the Loach-Laverty Sorry We Missed You tends to over-use?) means that the final scenes are more powerful.

The film is in Spanish with some Catalan. The film was co-written with producer Marçal Cebrian and she and Belén Funes had already made a short film with the same characters in 2014. Reading other festival reviews, I get the impression that the established Catalan filmmaker Isobel Coixet helped A Thief’s Daughter get into production. If so, I’m glad she did. This was a strong opening to the festival. Here’s a Spanish trailer, the English subbed one appears to have no sound.