Little Joe was funded by a range of European public funding agencies and is now distributed in the UK by the British Film Institute. Its profile within the European film world is based on its Austrian director Jessica Hausner’s previous Cannes screenings and its Cannes 2019 Best Actor prize for Emily Beecham. But apart from a handful of critics, the film audience has not taken to it – at the time of writing it has a 5.9 score on IMDb. I think the problem is that the film falls into a contemporary bear-trap – the sense for audiences that an arthouse director is making a genre film but not carrying through the expectations they have for that specific genre. It’s a different version of the problem which also affects The Lighthouse.

‘Little Joe’ is the name given by a senior ‘plant breeder’ to a new plant she has created as part of a project to develop a house plant that will produce excessive amounts of pollen and a very distinctive smell.  The project team believe that inhaling the smell will be calming and will promote ‘happiness’ – thus tying in to the latest ‘wellness’ craze, though nobody mentions that in a film shot in 2018. The plant name refers to Alice Woodard’s son, Joe a young teenager who she fears she may be neglecting. As well as the central narrative about the plant, a parallel narrative explores Alice’s relationship with Joe (she is a single parent, her estranged (?) husband lives out in the wilds, in the fells). Alice is visiting a psychotherapist (Lindsay Duncan) to deal with her anxieties about parenting.

Joe and Alice with another takeaway meal

The genre narrative here is seen to belong to either horror or science fiction/speculative fiction and most critics and audiences seem to have assumed that this is a re-imagined version of the famous Body Snatchers novel (1955) by Jack Finney which has been adapted four times by Hollywood. Although I read this suggestion before I saw Little Joe, I forgot about it completely and instead thought about a range of other horror/SF narratives. Two Ira Levin novels sprang to mind, both of which later became Hollywood hits – Rosemary’s Baby (1968) and The Stepford Wives (1974). These may seem peculiar references but the key element is the fear that all of us feel when we think that somebody we know well still looks the same, but that they seem now to be somebody else. This sense of paranoia makes for a quiet but devastating psychological thriller. I was pleased to discover that the writer-director (with co-writer Géraldine Bajard) was aiming precisely for this:

. . . our concern was to create an atmosphere within the scenes that allows the audience to question the integrity of the characters involved.

We wanted to offer different ways of interpreting what is happening: the so-called changes in people can either be explained by their psycho­logical state of mind, or by the pollen they have inhaled. Or alternatively, those ‘changes’ do not exist at all and are only imagined by Bella [the first of the breeders to notice something] or Alice. (from the Press Notes)

The issue for audiences here appears to be that, first, the narrative moves at a glacial pace and there isn’t as much ‘plot’ as we would expect from a genre horror/SF film and second that because we know the story we can predict the next event. I don’t buy this, partly because I’m quite happy to accept the arthouse approach. Hausner herself offers a conversation in the Press Notes with a neuroscientist to suggest that the basis of her narrative is at least plausible. Plants do contain chemicals which humans choose to ingest in various ways and which we accept as behaviour-changing and mood-altering (cannabis and nicotine are just two examples). The horror factor in this narrative is terrifying because the film doesn’t have a clear resolution. In all the Invasion of the Bodysnatcher films at least we know that the pod people are replacing humans. In this film we never know if it is actually dangerous to inhale the pollen. Have we changed? Or, because we are happy, do we just not notice? 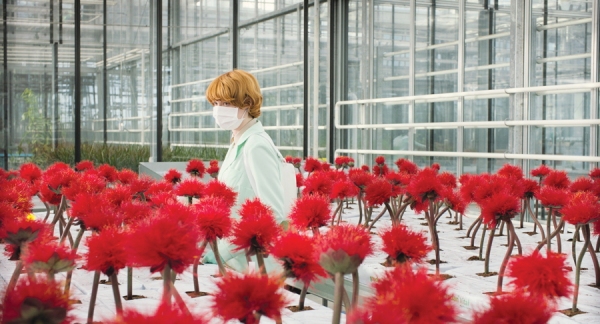 My gripe with the film is not with the ideas, the arthouse pacing or the complex relationship to genre, but with the aesthetics of the film. The costumes are designed by the director’s sister Tanja who has worked on Jessica Hausner’s previous films and those of the Austrian auteur Ulrich Seidl. I found them ugly especially in their cut and in the clashing pastel shades designed for the overall colour palette of the film. But I can see that they help to create the sterile world of the plant breeders. They are matched by the camerawork of Martin Gschlacht and Hausner’s decision to use some of the avant-garde Japanese music of Teiji Ito (1932-1981). Ito is credited with melding traditional music from noh and kabuki theatrical forms with American avant-garde music. Hausner came across his work because of his collaborations with Maya Deren (who he married at the end of her life). This music has been one of the most disturbing/irritating aspects of the film for some audiences, especially those expecting a conventional horror/SF score (even though conventional scores for such genre films do sometimes use unusual musical forms). Finally, it is important to add to the aesthetic mix, the acting styles that Hausner has urged some of her well-known actors to adopt. I find it difficult to describe this style other than to say that it feels stilted and unnatural. I did wonder if any of it was associated with this being Hausner’s first film in English, but I would have expected the actors to have overcome any issues with the script. It must be deliberate and is most apparent in scenes which would otherwise carry emotional force such as those between Alice and Chris (Ben Whishaw) and between Alice and her son and his girlfriend.

There were times watching Little Joe when I was strongly reminded of Peter Strickland’s In Fabric. That film has the same sense of ‘timelessness’ – but it also has plenty of humour, violence, horror, sex and passion, all absent in Little Joe. I sound as if I am damning Little Joe, but actually I did find it intriguing and always interesting. I’m not sure why Emily Beecham won her acting award. Perhaps it was because she gave Jessica Hausner precisely the performance the director wanted? I do wonder if I’ve fallen into the trap of ‘seeing’ Alice only through a ‘male gaze’? It’s interesting that the three other female roles of the psychotherapist, the former lead plant breeder, Bella (Kerry Fox) and Joe’s girlfriend Selma (Jessie Mae Alonzo) are all characters with more vitality and emotion reflected in their costumes and acting than that of Alice.

The production, with its Austrian, British, German and French funding was shot mainly in Liverpool and North West England, Austria, Germany and the Netherlands (for the plant breeding). I have seen comments from critics complaining about ‘another Euro-pudding’ but I think the different locations add something to the ‘otherworldliness’ of the narrative. If you go in to Little Joe thinking that you will see a horror or SF genre film I expect you will be disappointed. You might enjoy it more as an art film exploring a specific set of ideas. I’m now going to try to watch Jessica Hausner’s earlier success Lourdes (Austria-France-Germany 2009) which has just popped up on MUBI in the UK. I’m expecting a similar arthouse approach but without the genre narratives.