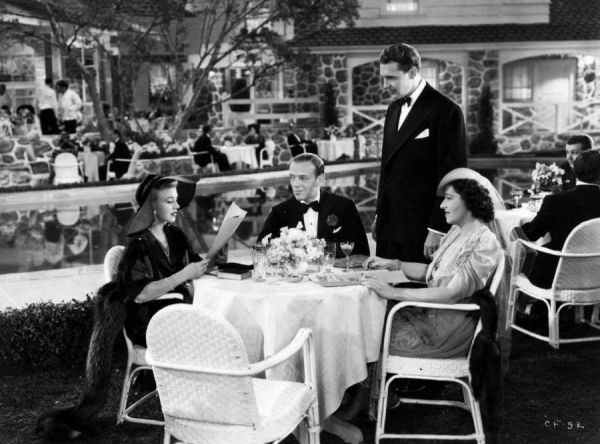 Unsurprisingly, Tony meets Amanda and they fall for each other. He then tries aversion therapy under anaesthesia and hypnosis to shift Amanda’s attention back to Stephen and this backfires. It’s obvious how all of this is going to work out, but who cares? The joy of these films is primarily in Fred and Ginger’s dancing and there are some terrific sequences here. The songs are by Irving Berlin and I recognised only one tune (‘Change Partners’). The story seems to be that Fred thought one song was such a clunker that he refused to sing it. The ‘Yam Song’ was therefore sung by Ginger and I think Fred was right, which is not a criticism of Ginger’s singing. It’s nice to know Berlin was human and could produce something I didn’t enjoy. All this throws the onus back on Fred’s dance ideas. We get a choreographed routine where he drives golf balls to musical accompaniment. Genius! More spectacular is the dance that follows on from the ‘Yam Song’. It took my breath away because of its sheer physical athleticism as well as grace and beauty.

The plot reads more like a screwball romcom than a musical comedy and I thought immediately of Bringing Up Baby for some scenes, especially with Fred in evening dress and Ginger in a long dress in a country club as substitutes for Cary Grant and Katherine Hepburn. The screwball element is provided mainly by Ginger being forced out of ‘amnesia therapy’ too soon which results in some crazy driving and playing with a skeet gun – the phallic connotations of which are entertaining in this context. The same sequence also includes an early role for Jack Carson as Fred’s ‘nurse assistant’. The Bringing Up Baby references are partly explained by having Dudley Nichols as a writer on both films which were produced in the same year at RKO. I don’t think the film was as successful as the earlier RKO musicals, but like Bringing Up Baby, I think it looks terrific now.

Amanda and Stephen in his consulting room

Carefree has 19 more days on iPlayer in the UK. Here’s a clip in which Amanda can’t admit she’s attracted to Tony so she invents a dream which acts as a kind of critique of psychoanalysis. I love her dress with the heart and arrows.