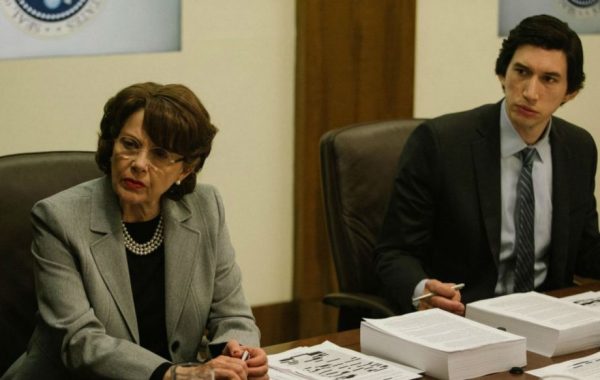 Bening and Driver as Feinstein and Jones

Writer-director Scott Z Burns succeeds in The Report where he failed as scriptwriter of The Laundromat (US, 2019), directed by Steven Soderbergh, in presenting complex material in an engaging and dramatic fashion. The Laundromatfloundered, despite Soderbergh throwing tricksy set-ups at the viewer and a stellar cast, because the attempt to tell the story of the Panama Papers through an ordinary person didn’t work. The Report tells of the investigation into the CIA’s use of torture in the ‘war on terror’ through the chief investigator, the dogged Dan Jones (the suitably taciturn Adam Driver), and this gives the film a central pillar at the heart of the narrative. It also benefits from a great performance from Annette Bening as Dianne Feinstein, the chair of the Senate Select Committee on Intelligence, who has to negotiate between Jones’ determination to get the report published and Washington political machinations.

Both films are vital contributions to democracy as they attempt to inform the general public about corruption which is something corporate media, in general, fails to do. In the UK, where the BBC used to have a reputation for robust reporting, public service broadcasting fails to convey the complexity of these issues and the malfeasance of our ruling classes (the BBC recently edited out the laughter greeting Boris Johnson’s statement that truth in politics is important thus saving the man from ridicule). Complexity does not sit well in the 24-hour news cycle (actually the cycle is much shorter these days) and much of the press in the UK is like Fox News in America: propaganda outlets for the powerful. Complexity is not easy for mainstream films either and I doubt The Report will pull up trees at the box office even though it deserves to. It’s not dissimilar to All the President’s Men (US 1976) which dramatised the investigation into Watergate; the establishing shot of the brutalist concrete of the building Jones works in references the earlier film. It’s a damning sign of the times that Pakula’s ’70s film won Oscars and, despite the fact The Report is better, the new film’s shelf life in cinemas is likely to be short.

The inevitable wordiness is leavened, if that’s the right word, by re-enactments of the torture led by two contractors who convinced the CIA, post-9/11, that they had the ‘sauce’ which would get to the truth in interrogation. I was gobsmacked to learn they received $80m for their troubles. As soon as, in panic and desperation, they were given carte blanche to torture, the institutional momentum ensured they could not be stopped as no one in positions of authority wanted to admit they were wrong to go down that route in the first place. There is some wicked humour in scenes where one of the contractors states that they now know the victim of waterboarding is lying; Feinstein remarks that if one man was waterboarded 183 times, why didn’t they realise the technique doesn’t work?

The film is very good on the realpolitick that meant Obama, who’d portrayed himself as non-partisan when campaigning for the presidency, wanted to suppress the report; the references to drone strikes is also a useful corrective to that president’s saintly image (surely a result of his charm and the contrast with his successor). Zero Dark Thirty is given a justifiable poke as Bigelow’s film shamelessly lied about torture being instrumental in Bin Laden’s assassination.

Driver carries the film brilliantly. As the obstructions increasingly make it difficult for him to finish the report he slowly reaches (almost) boiling point in outrage that the truth is something that should be hidden from the people. It’s a vital film for the 21st century.