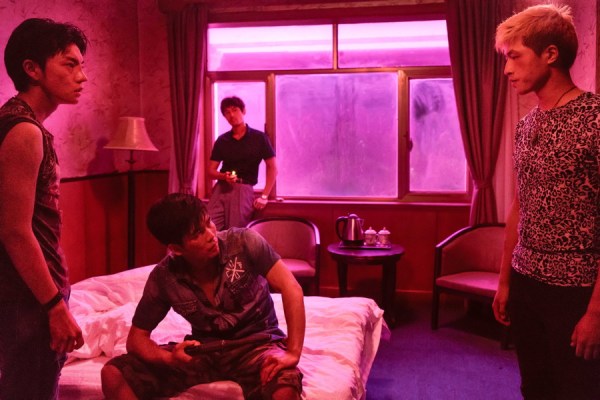 The Wild Goose Chase was in competition at Cannes in 2019. I think that the Cannes competition place was won because this is a French co-production of the fourth film of writer-director Diao Yinan, a filmmaker who began as a writer for the Sixth Generation director Zhang Yang in the 1990s soon after his graduation from drama school in Beijing.

His previous film, the thriller Black Coal, Thin Ice (China 2014) won the Golden Bear at Berlin and was released in the UK. I’m sorry I missed it. This new film is described in the French press notes as a polar and US critics have described it as a film noir, but I’m grateful for the press notes in which director’s own statement suggests a hybrid of polar and wu xia (martial chivalry film). He refers to that rather wonderfully envisaged concept of the jianghu or ‘marginal world’ where things and people are not quite what they seem. I think I remember this concept as worked out in A Chinese Ghost Story (Hong Kong 1987) and The Bride With White Hair (Hong Kong 1993) both featuring the much-missed Leslie Cheung. The polar provides the battle between police and criminals and the jianghu describes the ‘marginal world’ in which the action takes place. As Diao himself puts it, the police are not in uniform, they are disguised in this night-time world where all kinds of things can happen, especially on the misty lake and in the chaotic backstreets of the town.

Lui Aia or the ‘woman in red’ at the station. Zhou Zegong’s shadow is on the wall

The film begins with a meeting at an underpass beneath a railway station on a dark and wet night. The central character Zhou Zenong (Hu Ge) is waiting for his wife, but a mysterious woman Liu Aiai (Kwei Lun-Mei) in a slinky red top appears and tells Zhou that she has been sent instead. Several flashbacks will then reveal why this meeting is taking place before the narrative moves into the inevitable noir/polar ending. I must confess that I found some of the jumps in time between sequences slightly bewildering so I’m having difficulty trying to discern a linear story. I don’t think that would worry the director. He suggests that he is more interested in ‘movement’ through the dark world than a psychological study of the ‘doomed man’ and the femme fatale. The opening is in fact quite slow but things soon speed up, moving into a series of sometimes surreal and always fascinating set pieces and chase sequences. Diao suggests that each of them has a basis in reality – a news story or something he himself had noticed. One sequence presents a ‘conference’ of local criminal gangs, meeting for a demonstration of how to steal motorbikes and a subsequent re-organisation of territories for each gang. But the aspect of the film that really caught my attention were the scenes on the ‘Wild Goose Lake’ itself where prostitutes posing as swimming beauties ply their trade. I can think of a few American films noirs where a couple are in a small boat on the water in the fog, but the most striking image I remember is the boat trip in Mizoguchi Kenji’s Ugetsu Monogatari (1953).

At points the film becomes a police procedural but the central plotline focuses on the large reward offered for Zhou’s capture. Zhou himself decides that if anyone is to get the money it will be his wife and child. But how can he ensure that this happens and who can he trust?

The key to the unusual locations is the regional setting of the film in Wuhan, a major city region and large urban sprawl in Hubei province. Diao searched for locations around the many lakes in a 200 km radius from the centre of Wuhan on the Yangtse River. He then decided to use local Wuhan dialect rather than standard Mandarin. Kwei is Taiwanese and she had to learn the dialect, as did Hu Ge. Most of the large cast are local actors or non-professionals. The production must have been relatively expensive because of the many nights (50) of shooting complicated action scenes. It seems strange that Diao would create a film for which most Chinese audiences would need subtitles. The international audience will have subtitles anyway and won’t appreciate the local dialect. So is this a rare hybrid genre-art film. Obviously this works for the South Korean auteurs such as Bong Joon-ho or Park Chan-wook, but their films are blockbusters at home as well as arthouse/specialised hits abroad. From the Unifrance website (all French films listed) it looks like the film could be distributed in the UK by MUBI so I’ll be watching out for it on my stream and hoping it gets into at least a few cinemas.

I’ve enjoyed researching the film and I think now that I’m beginning to understand a bit more. There are some extremely violent incidents (which are also quite unusual) to go alongside the surreal sequences. Overall the film is exciting and fascinating for anyone interested in Chinese cinema and that distinctive blend of Chinese and French crime genre ideas. I’m intrigued to see that this has now become an aspect of mainland cinema. I’d be interested to know what HK filmmakers like Johnnie To make of this film. Which brings me to Hu Ge. He is quite distinctive as a tall Chinese whose looks certainly equip him for the role. One review I saw suggested that he had a presence like Robert Mitchum in RKO noirs. I’m not sure that is quite right, but he does reming me of other actors in crime noirs. This is definitely a film to look out for.