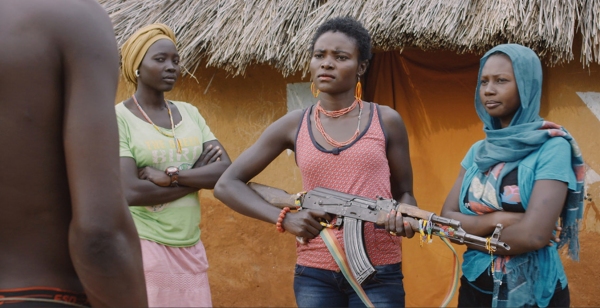 Lina (Ekram Marcus, centre) with the AK-47 and two other young women in the village who are annoyed with Adnan

Akasha or aKasha (the ’round-up’) is a gentle comedy about young men and women in the midst of the long-running civil war in Sudan. Writer-director Hajooj Kuka won prizes for his documentary feature Beats of the Antonov (2014) and this feature returns him to the same conflict with the same backing from South African production company Big World Cinema (which also backed Rafiki from Kenya). Big World Cinema has been effective in getting films from across Africa into major international festivals and this one appeared at Venice, Toronto and London in 2018. We watched the film as part of Black History Month at the same venue where we saw Beats of the Antonov back in July. Again there were members of the local Sudanese community in Bradford in the audience. This time they were nearly all women which makes me wonder if the men knew something about the film. One of the features of the earlier film was the director’s interest in the culture of the young women in the Nuba Mountains and Blue Nile regions of Sudan, fighting against the regime in Khartoum.

Absi and Adnan get help with their disguises.

The film begins with a pre-credit scene in which we learn that the civil war has a forced ‘time out’ during the rainy season when the churned-up mud tracks make movement difficult. The soldiers in the rebel army are given time off to help their families. The ’round-up’ then begins to bring the soldiers back for the next round of action and the film’s narrative follows two young men who attempt to avoid being called back. We first discover Adnan (Kamal Ramadan) in bed with his girlfriend Lina (Ekram Marcus) but when she sees another woman’s name carved onto the stock of Adnan’s AK-47 she throws him out, believing he has been sleeping around. Adnan finds himself outside the compound without his gun and without a belt to hold up his uniform trousers. But he does come across Absi (Ganja Chakado), a city boy who has so far avoided a call-up. The two bond quickly and hatch a plan to retrieve the gun and to avoid the local commander Kuku Blues (Abdallah Alnur) who is already hauling young men back into uniform. The plan involves dressing as local women. Meanwhile the young women in the village are preparing for a wedding. Those are the ingredients of the plot with ample opportunities for jokes and sight gags.

Most of the gags are basic and universally accessible but Hajooj Kuka sets out to satirise the military pretensions of the men and to boost both the intelligence and the wit of the young women. A couple of carefully placed objects (a copy of Fanon’s The Wretched of the Earth and a poster of Angela Davis and other Black leaders) suggest that Lina is far more aware than Adnan who will later have to eat humble pie when his ‘warrior’ status is revealed as a sham.

Absi and Adnan on the bike

Hajooj Kuka was initially known for his camerawork and with his cinematographer Giovanni P. Autran he creates some attractive landscapes around the village and into the hills. With characters often seen in long shot moving through the landscape (including chase sequences) the film seems to refer back to quite a few of the internationally-distributed West African films of the 1970s and 1980s. At one point Absi borrows a motorbike and I wondered if the resulting images were a nod to Touki Bouki (Senegal 1973). Closer examination shows the bike to be a Chinese model from Senke. A little later, Adnan sets off for the hills and has an ‘experience’ with hallucinogenic flowerheads. Jokes about ‘stoners’ and dope smoking are told by Kuku Blues, possibly in order to demonstrate his ‘hipness’ – but readings like this are dependent on subtitling. I wondered if this too was a nod towards the ‘Return to Source’ African films of the 1980s. Mostly though the film is a gentle comedy that makes some interesting social comments on gender identity and modern culture for young black Sudanese men and women. The Civil War is currently on hold after the dictator was deposed in April 2019 and peace talks with the new regime are underway. It would be good to think that films like this in future can focus on the comedy (and the music) without worrying about the recall to arms.