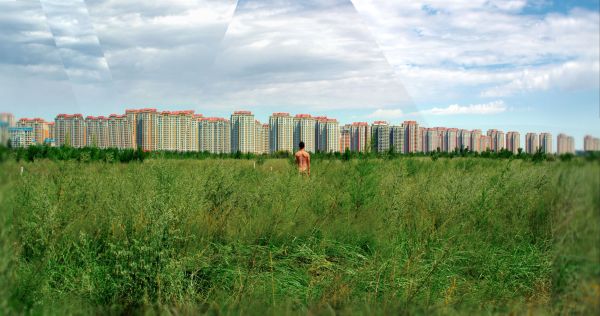 I don’t know what the symbolism of the man who we see carrying a big mirror on his back throughout the film is, but there’s no doubting the message of this incredible film. Co-writer-director-cinematography Zhao Liang has produced a modern version of Dante’s Inferno but the hell we visit is on earth. On the Mongolian steppes a gigantic open-caste mine blights the landscape and the lives of all those who work in it and live by it. As the narrator, presumably Zhao, tells us, the reference to Dante is explicit.

In the early 19th century the Romantics ‘discovered’ the natural landscape and found it ‘awesome’, in the sense that it filled them with fear. It wasn’t until urban areas became sufficiently large that the town-country opposition was created and so the countryside could be seen as a distinct entity. Behemoth, too, presents awesome landscapes but they are scary because the capitalist pursuit of profit creates absolute devastation. Pastoral images of Mongolian shepherds have the industrial mine as their backdrop, the behemoth of the title. Zhao’s images are themselves awesome in the modern sense of the word. The framing and positioning is quite extraordinary, especially when we realise that he was a ‘guerilla filmmaker’ when operating within the mine; there’s no way he would have gotten permission to film. Such is the ‘beauty’ of his cinematography that it’s comparable to the photographs of Sebastião Salgado‘s and Edward Burtynsky; the open cast mine also reminded me of Godfrey Reggio’s Powaqqatsi (US 1988).

In keeping with the astonishing compositions, the narration is poetic; it tends to deal with what we’re seeing in an oblique way, as if it is impossible to comprehend the disaster in front of us. However, he is not simply dealing in abstracts as the film progresses to focus on the people who work in the hell. One scene starts with an entirely red screen and it seems that Zhao is using an expressionist device to portray the violence done to the landscape but then shadowy shapes appear and we realise the colour is from a blast furnace with workers in close proximity. Later we see some of the unfortunates who simply stare into the camera, their faces scarred by their work. They are silent witnesses to the human cost of the rampant exploitation of the environment. They are scarred inside too as many are suffering from pneumonociosis; we see protestors demanding restitution and men lying on their death beds.

The narrative is brilliantly structured, by Sylvie Blum and Zhao, as we end in what could be one of Burtynsky’s landscapes. A deserted city is seen with tumbleweed blowing across the road. Is everyone at work? Then a litter picker runs to capture the detritus of nature and then we are told it is a ‘ghost city’, one of many that were built in China but there was no one to live in them. You couldn’t make it up: the stupidity of capitalism, in the guise of property speculation here, that is destroying the planet and its people.

I tentatively look forward to seeing Zhao’s other documentaries.