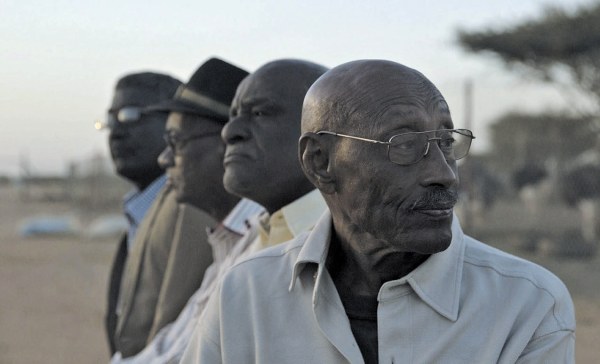 Talking About Trees is a wonderful film that manages to tell a sad story but to imbue it with the energy and the warm human feeling of its remarkable central characters. A ‘first feature’ documentary by Suhaib Gasmelbari, it won a prize at Berlin this year and has been acquired for UK distribution by New Wave Films. Do try and get to see it if it comes your way. You are unlikely to be disappointed.

There are two narratives woven together here. The main ‘driver’ is the attempt by the ‘Sudan Film Group’ to revive a cinema culture in Sudan where cinema-going was effectively banished by the regime which came to power after the military coup of 1989. The film group comprises four of the Sudanese filmmakers who were trained abroad in the 1970s and who returned to produce the first Sudanese films. Now in their late 60s they travel to villages around Khartoum offering ‘pop-up’ film shows using a laptop and a small digital projector. But their aim is to rent one of the large and virtually abandoned cinemas in Omdurman and show contemporary films to mass audiences. But to do this they must navigate the bureaucracies which remain reluctant to see cinema return (the film was made before Omar al-Bashir was deposed earlier this year.). While they work on trying to organise a large scale screening, the old friends also begin to excavate the history of Sudanese cinema, finding scratchy old copies of their own films and VHS tapes that were part of their collections of global cinema. One of the four is also engaged in making a film with his smartphone about his experience of being imprisoned and interrogated at the time of the coup. The history of what actually happened around 1989 is told in subtle ways, so we see the filmmakers being interviewed for a radio programme in which the interviewer is gently corrected about the demise of cinema in Sudan. It didn’t die of natural causes, it was shot.

The four colleagues find another cinema for possible re-opening

What the film also usefully reveals is that Sudan experienced what happened across much of sub-Saharan Africa in the 1960s and 1970s, especially in francophone countries. Talented young filmmakers (mostly young men) were able to travel to film schools abroad, often to Paris but also to the Soviet Union. Sudan had been under British control before 1956 but hadn’t been fully part of the British approach to documentary which was the legacy in Ghana or Kenya for example. (This website account suggests that there was a British colonial film legacy even if limited.) Instead in the 1970s the Sudanese went to the USSR or Germany or France. There they learned how to make the kinds of politically charged ‘Third Cinema’ films which won prizes and sometimes gained a form of international distribution as well as attracting local audiences. In one scene we see a filmmaker now in his late sixties phoning a Russian film archive to see if they have a copy of the film he made as a young man. To place this in perspective we also see a phone call to a European company that sells cinema screens – we learn just how much it might cost to re-equip one of the Sudan’s big (outdoor) cinemas. Across Africa traditional cinemas have closed over the last 25 years, mostly because people now watch films on satellite TV or forms of digital video and cinemas have been bought by churches and wedding entrepreneurs. In Sudan it is the government and a fundamentalist form of Islam that helped to close them.

The film was produced with various European partners and also with support from the Chadian filmmaker Mahamat-Saleh Haroun. One of the films shown by the group to a village audience is Waiting for Happiness (2002) by the Mauritanian director Abderrahmane Sissako and this suggests the solidarity of African filmmakers. These two directors represent the last link to the generation that travelled abroad to study film. Sissako was also in Moscow in the 1980s. Sissako too has been involved in re-opening a cinema in Mali. We do get to see some clips from the films made by the four Sudanese filmmakers back in the 1970s and 1980s and the documentary’s title refers to one of these.

We’ll have the chance to see Talking About Trees again in West Yorkshire at the Leeds International Film Festival in November. I hope it proves popular. I do worry that its one weakness is that it takes a little time to get going for audiences not already au fait with the history of cinema in Africa. Some of the later scenes in which the old filmmakers talk to young footballers and spectators about what they want to see in a re-opened cinema are very lively and engaging. What the young people (and older people) want to see are contemporary films from America or India, something which leads the Sudan Film Group to consider showing Tarantino’s Django Unchained (US 2012). There are, I think, at least two commercial cinemas operating in Khartoum which have internet listings. I assume that these attract a middle-class wealthy patrons but it would be good to hear from anyone who knows the cinema scene in Khartoum. If you want to know more about how Africa Cinema developed in the 1970s, try to find a copy of Caméra d’Afrique directed by Férid Boughedir in 1983.