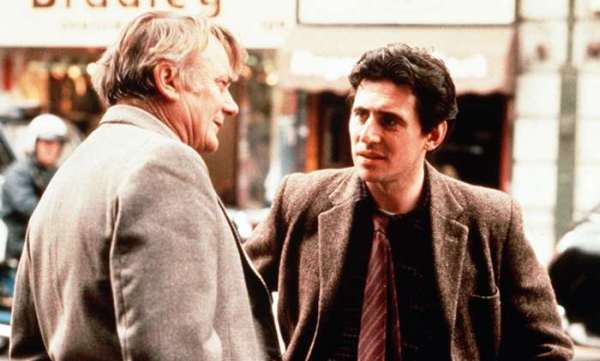 What happened to the ‘fourth estate’?

As I remember it, Defence of the Realm was well-received when it was released; I certainly enjoyed it at the time. The film follows investigative journalist Nick Mullen (Gabriel Byrne) as he digs into a politician compromised as a possible spy. What’s striking now is how naive the film seems (or is it me?), although the idea that the security services use the press to disseminate propaganda wasn’t new it seems to suggest it is surprising (The Sunday Times‘ ‘death on the rock’ story rubbishing witnesses to the state-approved assassination of IRA members in Gibraltar was just around the corner). I suppose you could take Mullen’s naiveté to be a narrative device, though the ‘world weariness’ of Byrne’s persona makes it difficult to believe he would be so gullible, to lead the unsuspecting in the audience through to the ‘horrific’ realisation about the corruption of the British Establishment.

The film is an effective thriller, though the newsroom and printing presses are oddly ‘unbusy’ too often. Denhom Elliott is excellent as the ‘shabby malcontent’ who has seen it all but now observes the world through the bottom of a glass. Another aspect that dates the film is the marginalisation of women: Greta Scacchi doesn’t get much to do.

Are people more aware nowadays about how the press is both compromised by proprietors’ commercial interests (noted in the film) and their links to the security services? Whilst social media has facilitated the expulsion of bile into the ‘public sphere’ it has also served as a tool of education. Media Lens‘ analysis, for example, must surely have lifted the scales from many people’s eyes about the corruption of the fourth estate (which is meant to hold those in power to account) and Mark Curtis is always informative on foreign policy.

It’s easy to assume that things were better in the past but I find it hard to believe any newspaper would have had the front to suggest that Boris Johnson is fit to be Prime Minister before the ‘post-truth’ age. Fake news is not new but brazen lying by politicians, and not getting held to account for it, is a curse of our times. Part of the problem we have in the UK is the complete failure of the BBC as a news organisation (Tom Mills is an excellent commentator on this); whilst it’s always been an Establishment mouthpiece (one Director General who tried to fulfil the BBC’s news role, Alisdair Milne, was forced to resign by a Thatcher appointee) its editorial decisions have shifted so far to the right that it can no longer be considered centrist (there are too many examples: giving a platform to the ‘far right’; not only the failure to investigate Leave.EU’s criminality but inviting them to spin their version whilst ignoring their accusers; the vilification of Julian Assange; hit jobs on Corbyn and so on.

Defence of the Realm reminds us of the controversy of nuclear weapons on British soil that precipitated the Greenham Women protests. How they were vilified by the press at the time, just as Extinction Rebellion is now! There’s a, not particularly good, exhibition on at Manchester Art Gallery, Get Together and Get Things Done, that shows us what the Establishment vilifies as an unacceptable attack on the status quo, is often later eulogised (co-opted) if the protest succeeds.