‘The Importance of Set Design …….’

One’s favourite film from a major artist such as Alfred Hitchcock tends to fluctuate over time; but for the last few years I have felt that this title is the most enjoyable and the finest of the productions directed by Hitchcock in Hollywood. It is a completely studio film, shot on the Paramount lot, though Hitchcock retained the copyright, so that now the film  is part of the Universal collection.

The protagonist L. B.”Jeff” Jefferies is played by James Stewart, an actor who starred in several Hitchcock films and who, in the 1950s, brought a darker tone to his characterisations. The romantic interest in the film is Lisa Carol Fremont, played by Grace Kelly who seems to have been Hitchcock’s favourite blonde. The triple names of the two characters points to their social differences: “Jeff” is a professional photographer who believes his life should have the least amount of encumbrances and who revels in being politely uncouth whilst Lisa is a socialite and model, seen in a series of extravagant and stylish gowns and costumes.

The film opens with Jeff tied to a wheelchair after suffering a broken leg whilst on a photographic assignment for the magazine for which he works. He spends much of his time surveying the apartments that surround the courtyard in which his own is set: this is in the New York Greenwich Village. Jeff watches the people in the other apartments, even using binoculars and a powerful telephoto lens on his camera. He pays particular attention to the man in the apartment nearly opposite: Lars Thorwald (Raymond Burr). He comes to suspect that a crime has been committed and this investigation drives the plot forward.

The film is adapted from a short story by Cornell Woolrich for ‘Dime Detective’ (1942), a noted contributor to the genre of ‘pulp fiction’. Whilst the title is not a film noir it does contain some of the aspects of that genre. There are the triangular relationships, the seeker hero, the siren call (not a femme fatale) and the world of chaos that envelops the hero. And there is chiaroscuro in certain key scenes.

Hitchcock’s typical direction is well served by a team of talented craft people; a virtue that was enabled by Hitchcock’s preceding success. The setting of the courtyard was produced by set designers Hal Pereira and Joseph MacMillan Johnson. This careful construction is excellent in its dramatic scope and detail. The cinematography of Robert Burks exploits this setting and the interior of Jeff’s apartment with consummate skill; (think of North by Northwest). The colour palette is excellent, shot on Eastmancolor but printed on Technicolor stock in the original release. George Tomasini edits this material with real skill, following the conventional continuity of Hollywood but with excellent use of dramatic cuts and changes; (as later in Psycho). The music, by Franz Waxman, is sparse though the opening sets the tone really well. Most of the film’s soundtrack is sound from within the story world produced by the team of John Cope, sound recordist: Harry Lindgren sound recordist: Howard Beals sound editor and Loren L. Ryder sound recorder mixer. Finally the Hollywood veteran Edith Head designed the costumes. 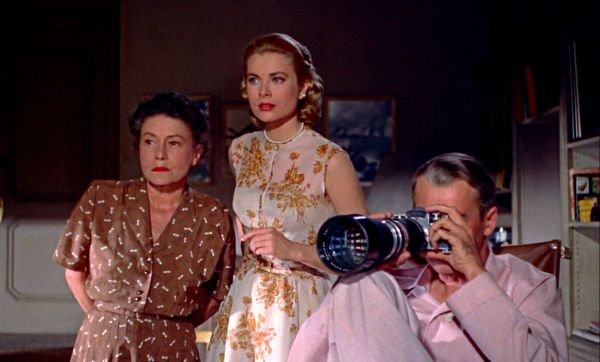 James Stewart plays Jeff with aplomb, and his 1950s persona makes the obsession with the mystery convincing. Jeff is a voyeur, as are often the protagonist in Hitchcock films. But the voyeurism in Hitchcock films is overlaid with a sardonic humour and a reflexive stand point. Meanwhile Grace Kelly’s Lisa is a self-determining young woman with an assured response that is not true of all the heroines in Hitchcock’s Hollywood output. The other residents, with the exception of Thorwald, are mainly seen as objects of Jeff’s gaze., though circumstances revise his judgements on them. Burr’s Thorwald is an almost sad figure but dangerous. We also have to fine character performances with Thelma Ritter as Jeff’s nurse/Masseur and Jeff Corey as a friend in the NYPD. And there is a Hitchcock dog; less happy than in other films.

The tendency to critical presentation is, in  part, due to the adaptation of the Woolrich story by John Mitchell Hayes. Watch carefully what we learn of Jeff’s observations; what he sees and what he does not see.

Like all outstanding films this has a richly constructed narrative, dramatic but also believable performances, beautifully crafted vision and sound and enough questions to retain interest until the final moments. Here, Hitchcock, with a touch of irony not frequently found in the Hollywood oeuvre, leaves the audience with one last ambiguous shot.

A screening as part of the Leeds Festival of Architecture paid tribute to the importance of design in the film. It was screened from a pretty good 35mm print, the original format, at the Hyde Park Picture House. It was accompanied by a short from the Canadian artist Guy Maddin, Accidence (2018). This is a nine minute film, apparently all in one long take. But it was shot in digital so likely there are some edits. The camera is trained on the frontage of a large block of flats; it opens in a mid-shot and slowly zooms out to a long shot. Then later it zooms slowly in to more or less the original mid-shot. Different actions take place in different apartments and characters move between them. One event, resulting in at least one likely death, seems the main action but I think it would take a second viewing to be sure of all that takes place. The main characters appear to be variations on those found in Hitchcock’s Rear Window, down to the small dog; [who happily survives in this version]. This film is clearly a riff and play on the famous 1954 feature. I think Hitchcock would have enjoyed it; I certainly did.