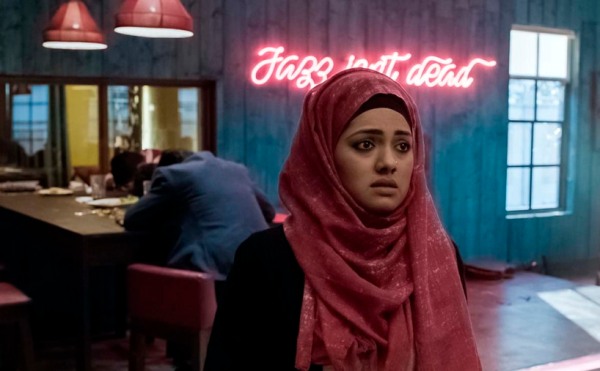 Nusrat Imrose Tisha plays a hostage, a local Bangladeshi woman interrogated by terrorists as the other hostages keep their heads down

The third film from the ‘South Asian Film Festival Up North’ offered another change of direction. Saturday Afternoon is written, directed and produced by the Bangladeshi auteur Mostofa Sarwar Farooki in a co-production with Indian and German companies. Farooki has had success with several films in major festivals such as Busan and for this film he had a $500,000 budget and international stars and crew. The 86 minute feature starts with some street scenes on a quiet Saturday in Dhaka during Ramadan. It cuts to a man washing his hands in the washroom of a restaurant bar and from that point a single take is used to explore the tense drama unfolding in the building in which a small group of terrorists are holding hostage the staff and diners. The screenplay is based on/inspired by a real news story from 2016 in which 5 terrorists held hostages in a bakery shop/café resulting in multiple deaths of hostages and terrorists.

The single take shoot by DoP Aziz Zhambakiev (known for several high profile festival films from Central Asia) is not there as a gimmick and instead it is used mainly to keep up the tension as the camera swings around the action. This is a brutal film with the terrorists, who belong to an unnamed Islamist group, separating foreigners and locals and killing at will. The deaths are not shown in detail but we hear the shots and see the bodies being dragged away. Nobody is safe. The gunmen seek out atheists and non-observant Muslims as targets even if they are Bangladeshis.

Hostage dramas are problematic as film narratives if there is little chance of escape for hostages or even for perpetrators. What expectations do audiences have? When the narrative begins the police are already on their way and Farooki decides to end his film before the final shootout. The audience doesn’t know if anyone will survive. This means it makes most sense to discuss the narrative as a ‘hostage procedural’ – what do the gunmen do, how do they do it and why do they do it? Their aim appears to be to get publicity for their cause. They have a leader who is mostly in the background and may be a foreigner. There are three active men dealing with the hostages. One is generally calm, one much louder but seemingly in control, but the third, who speaks only English (?), is close to losing control and shouts loudly. All are killers but some appear more impetuous than others. The Indian Bengali actor Parambrata Chattopadhyay plays Polash, the most controlled of the three. They contact the police by forcing a hostage to call her mother who has a police friend. When they pass on their demands to the police they monitor what happens on the TV news. The script is sharp about the use of mobile phones, though I thought I saw a mistake. As well as the three active terrorists there are others in the building guarding entrances/exits.

The second way to think about the narrative is as a stage drama. The single take turns the restaurant into a theatre stage. We wonder if the terrorist leaders will maintain control and eventually we realise that there is a specific sub-plot about saving a hostage who the terrorists seek to identify and kill. This creates a suspense narrative. Will this character be exposed? In this kind of narrative the audience is also asked to consider attitudes and human emotions. What kind of morality is at play? How can the hostages collectively defeat the terrorists? What makes a person willing to sacrifice themselves to save somebody else? I’m sure there must also be questions about Islam and about how Muslims are supposed to behave in situations like this. Killing people because of religious belief (or the lack of belief) is completely bewildering to me. I note that several reviewers have praised the film for its approach:

Through this approach, by highlighting the tragic ridiculousness of the whole terrorist rhetoric, Farooki manages to highlight the benefits of tolerance and education, but at the same time stresses the fact that in the area, guns and not words or thoughts are the ones in command. (Asian Movie Pulse)

I wonder if the film really does highlight tolerance and education? I don’t think we can definitely say the terrorists are ‘uneducated’. When terrorists are prepared to die for a cause it’s very difficult to argue with them. The best strategy would seem to be to tell them very little, to try to distract them without provoking them. Having said that, foreigners are going to be killed anyway and perhaps only the locals who know enough about Islam to second guess the answers to the terrorists’ interrogation stand much chance. According to Deborah Young in her The Hollywood Reporter review:

It seems we will struggle to see how the film goes down in Dhaka itself but international reviewers think it works. I’m not sure I could say that I ‘enjoyed’ Saturday Afternoon, but I was certainly impressed by the filmmaking skills and intelligence on display by the cast and crew. As well as Farooki and Zhambakiev I’d also like to pick out two local actors, Zahid Hasan and Nusrat Imrose Tisha as well as the Palestinian actor Eyad Hourani (Omar, Palestine 2013). I’d like to pick out more but this is a film short on info about cast members.

Eyad Hourani is another hostage with a back story – will he be able to walk free?