This year’s ¡Viva! included a retrospective tribute to the Catalan director Bigas Luna who died just six years ago. The festival screened his ‘Iberian trilogy’ and a documentary BigasXBigas (2016) was screened alongside a video art exhibition at the Instituto Cervantes in Deansgate. The exhibition runs until April 13. The whole tribute was curated by Prof. Santiago Fouz Hernández of the University of Durham and Betty Bigas, multi-disciplinary artist and daughter of Bigas Luna.

The screening of La teta y la luna was introduced by Dr Abigail Loxham, University of Liverpool and she and Prof. Hernández conducted a Q&A/discussion after the screening. Unfortunately I could only stay for the first half of this. The screening used an archive 35mm print from Metro Tartan and on the big screen in Cinema One at HOME we noted all the problems with an aged film print but also the real pleasure of watching a well-made ‘film’.

The two previous films in the trilogy Jamón, jamón (1992) and Huevos de oro (1993) were set in Aragon and Alicante respectively but in La teta y la luna the setting is the coast of Catalunya. Like the other two films, La teta y la luna is also concerned with ideas about masculinity and identity presented through comedy and a celebration of eroticism in cinema. The narrative is presented through the eyes and voiceover of Tete (Biel Durán), a nine-year old boy who feels threatened on two fronts – first by his father’s insistence in instilling him with the fearlessness of machismo and secondly with his possible displacement from his close relationship with his mother prompted by the imminent arrival of a younger brother. Tete’s ‘test’ set by his father is to be the boy (enxaneta) who has to climb to the top of the human tower (castell) formed by the local men in an annual local celebration. His fear of doing this becomes displaced into an obsession with his mother’s breasts. If he loses these to his baby brother, he feels he must find another pair of equally fine breasts to take their place.

Tete’s quest takes him to a local carnival show by the sea where he discovers Estrellita (Mathilda May) a beautiful Portuguese dancer who performs with her French husband Maurice (Gérard Darmon) in a variety act. She dances and he farts while astride his motorbike. His farts are very controlled and he uses them to perform stunts. (I’m reminded of that other French entertainer, Le Pétomane (1857-1945) whose family were actually from Catalunya.) Tete discovers where Estrellita and Maurice have their caravan and he spies on them. But he soon realises he has a rival, a young Andalusian flamenco singer named Miguel (Miguel Poveda). I won’t go into more detail on the plot but as we might expect, Tete is exposed to a number of breasts of different shapes and sizes and he will eventually conquer his fear of heights in climbing the human tower.

. . . stealing her bra is Tete’s first attempt to rival Miguel and get closer to Estrellita

Before I engage with the introduction and Q&A, I’d like to just share a couple of my own thoughts. I remember watching Jamón, jamón, mostly for the early film appearances of Penélope Cruz (her first) and Javier Bardem. I don’t remember Huevos de oro but I may well have seen it and similarly I can’t be sure about an earlier watch for La teta y la luna. But I can be sure that I enjoyed both Jamón, jamón and La teta y la luna. All three films were photographed by José Luis Alcaine, the last two in ‘Scope. The cast members are all accomplished in these kinds of roles and freely enter the playfulness of Luna’s comic eroticism. Mathilda May trained as a ballerina – I’m not sure if Gérard Darmon ever trained as a flatulist. All the films received an 18 certificate in the UK and YouTube has attempted to certificate the clips that have been uploaded. It seems sad to me that a film with naked breasts could be seen as ‘offensive’ or harmful to younger viewers. Bigas Luna pokes fun at this I think with a surrealist sequence in which Estrellita spectacularly lactates into Tete’s mouth much as wine might be poured from on high from a large flask. There are many other similar visual jokes. Tete’s voyeurism also leads him to believe that women need to be ‘filled’ by their partners before they can produce more milk. Maurice is now impotent so Estrellita needs to be ‘filled’ by Miguel. 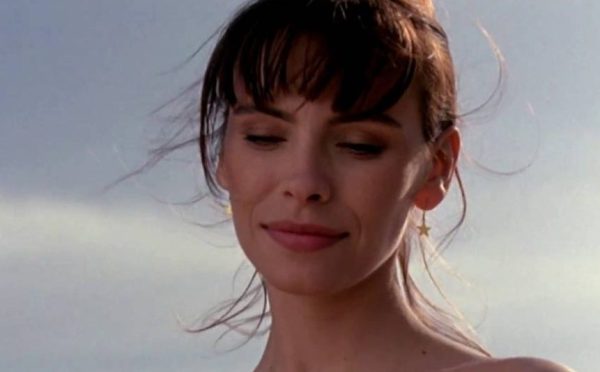 The great strength of the film is that everything happens at pace and the rudimentary plot is played out in 90 minutes or less. There is just about enough time to think about identity issues. The title refers to Tete’s appeal to the moon to help him find new breasts. He imagines a moon scene with the flags of Spain and the European Community as it was then. Estrellita’s Portuguese identity is not really highlighted but much is made of Miguel’s Andalusian background and Maurice’s ‘Frenchness’ and Catalunya is represented ahead of Spanish identity as such. 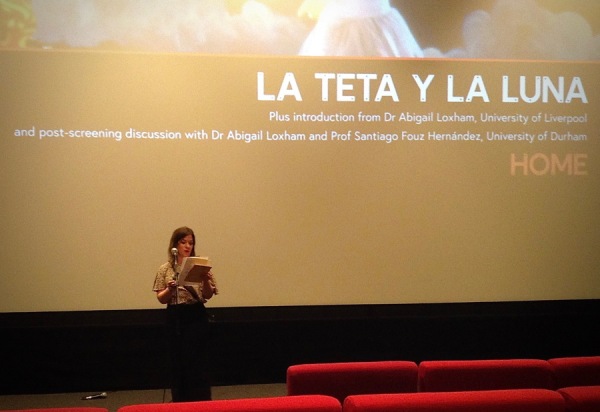 Listening back to the Intro, Abigail Loxham crammed a great deal into her short time allocation. She described the film as a ‘Freudian family melodrama’ and emphasised that Bigas Luna’s main point seemed to be to equate masculinity and nationalism and to see both as inflexible and needing to be treated in effect by feminisation and pluralism. She also noted that although he set this third film in Catalunya, it was not in the urban sophistication of Barcelona but in the pluralist and carnivalesque seaside camp site. She made the point that narrating the film through the child enable Luna to make his points about sexuality and inflexible masculinity without prejudicing the representation of the female characters. I’ve paraphrased what she said and I hope I’ve understood the points. She also commented on how the film, though nearly a quarter of a century old now seems timely as we consider where nationalism is taking the UK (England?) as well as other parts of Europe in respect of Brexit. I’m not sure about the feminine aspect though since we seem to be saddled with the most inflexible female leader (oddly also a ‘May’)!

In the Q&A there was a more detailed discussion of ideas about national identity and Prof. Hernández made several interesting comments about the trilogy of films which made me wish I’d been able to view the other two films this week. He discussed ‘passion’ in the film, relating it back to Loxham’s reference to a similar trilogy of plays by Lorca. It occurred to me then just how much red is used in the film (see the stills above). He also said that he was writing about Bigas Luna at the moment (and he praised Abigail Loxham’s work on Luna). After the screening I looked up the three Spanish film studies texts in my library and was surprised to find that Bigas Luna was completely ignored in one, briefly referenced in another and discussed mainly in respect to Javier Bardem’s involvement in the trilogy. I was surprised that Luna was not recognised in the way he (much like Almodóvar) took his early ideas from soft porn into mainstream films, developing the humour and making possible a deeper understanding of aspects of sexuality. I enjoyed the film and I’ll look out for opportunities to see the other parts of the trilogy.