This was a suitably gentle and welcoming title for my first day of ¡Viva! 25. The title suggests a laid-back hippie song from the late 1960s/early 1970s and indeed it is. Formentera is a small island a few miles south of Ibiza which has attracted musicians and travellers for many years. The song was written by Robert Fripp and Pete Sinfield of King Crimson and it appeared as the first track of the album Islands in 1971. The song appears in the film and the central character claims to have helped Sinfield to have written it. This is Sami played by the veteran actor José Sacristán who must have been 80 when he made the film but appears younger. Sami/Samuel still plays his banjo in a local bar and survives in his rudimentary house by the sea where he copes without electricity. One day his daughter Anna (Nora Navas) appears with her 10 year-old son Marc. She says she has to go to France to work and can’t look after the boy, leaving him with his somewhat stunned grandfather.

Marc and his mum on the ferry

What follows is a familiar narrative about the old and the young together. One critic has described it as ‘anodyne’ but I think that’s unfair. Certainly it doesn’t push hard towards comedy or tragedy but instead looks for a character study and explores Sami’s predicament with care and insight. If I have a criticism it is that Marc’s character is underwritten. Sandro Ballesteros who plays the boy is not given a great deal to do and inevitably most of our interest is directed towards Sami. Sami in turn is given a series of familiar generic characteristics as well as narrative developments to contend with. He still sometimes drinks or smokes dope to excess and misses appointments, he has an ancient unreliable Land Rover, ex-girlfriends and old musician pals – and a heart problem. He’ll also discover that his bar gig won’t last forever and of course somebody wants him to join a group of aged musicians and go on tour. First time writer-director Pau Durà is a very experienced actor so in some ways the script components make sense in terms of privileging performance. I also enjoyed the music very much. I was never a fan of King Crimson but and certainly not of the dreaded British ‘prog rock’ but Crimson in this mode are fine and what Sami plays on his banjo might be described as ‘psychedelic bluegrass’. 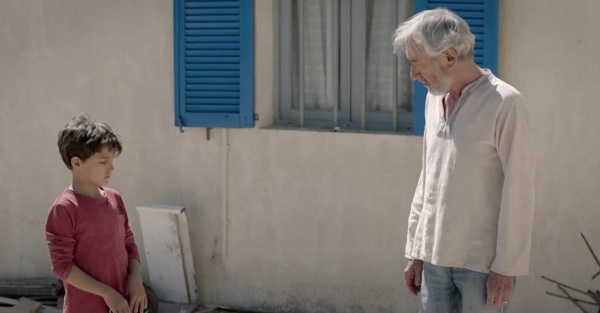 Marc and Sami and the distance between them . . .

The film scores best when it deals with Sami’s fear about how he will survive the next few years. He plays for older people in a club/residential home and meets the son of an old friend whose mother (of Sami’s age) is suffering from dementia and talking about the old days when Sami’s partner (the Formentera Lady of the title) was around. I won’t spoil any more of the narrative but I’d argue that José Sacristán’s performance, the music and Sami’s story are definitely reasons to watch the film. The other aspects of the story are conventional  but won’t spoil your enjoyment. It’s a shame that Anna doesn’t appear more in the film. I realised later that Nora Navas was the star of a very well-received ¡Viva! title in 2016, L’adopcio (Spain-Lithuania 2015). This film is mainly a male drama/melodrama but all the women who appear could be given more screen time.

This isn’t an art film but a mainstream film belonging to Catalan as well as Castilian Spanish cinema and both languages appear in the film. The short trailer below is without English subs.

Formentera Lady is on for a third screening at HOME on Friday 5th April at 20.30.