This was an experimental documentary that plays with style, representation and recreation. The subject is a young woman, Carmen who lives with her mother Ruth and brother Tito in a high-rise housing estate.

Her father, a Puerto Rican soldier, abandoned the family. All that is left to remind them of him is a handful of exotic postcards and his record collection of Caribbean and Hawaiian music.

The film is a documentary and includes observational film: for example Ruth leaving the tower block in the morning to go to work. We also see her and Carmen carrying out the cleaning duties involved. Then there are interviews, with Carmen, Ruth and Tito, talking direct to camera.

But these are intercut with far more oddball sequences. In these Carmen dresses up in flamboyant clothes and enacts fantasies for the camera;

I dream of a great love.

In other sequences the title is made sense as the collection of post-cards and records are presented. In the case of the records Carmen [for most] translates the lyrics, variously in English, Spanish and Portuguese, into German. The English sub-titles translate the German dialogue not the original sound tracks. Something similar happens when Carmen quotes poetry, here by Paul Éluard and another French poet.

The film mainly uses colour but some of the fantasies by Carmen are in black and white. The emphasis is on mid-shots and close-ups which generates a strongly subjective feel. The film runs for eighty-five minutes and nearly half of the film must be non-realist sequences. The film also lacks an obvious chronology which gives it a Brechtian feel. The film does have an opening and closing sequence, in both cases we see Carmen on the Berlin S-Bahn. It is as if the bulk of the film is a dream sequence.

The director Elfi Mikesch was there to introduce the film. She owns that the film was

“Inspired by the camp aesthetics of American (USA) underground films …”

This was her first film and she continued in a career that predominately worked on documentaries.

Some of the fantasy sequences have a definite kitsch sense. But there is also a sense of montage techniques in the manner of the Soviet avant-garde. Visually we have discontinuities and disruptions and aurally we have asymmetrical sound. This is really a melange of stylistic tropes.

In fact we were fortunate to see the film. It was shot of 16mm reversal stock and when the technicians at Deutsche Kinemathek came to attempt the restoration they found much of the print had decayed. But they were able to rescue the film and produced a digital restoration which we watched on a DCP.

I noted that this is very much Carmen’s world. Ruth, the mother, is mainly presented in terms of her work. The brother Tito appears several times talking to camera but I did not feel we learnt about his world. He did seem to be unsympathetic to Carmen’s point-of-view.

The setting of the film is important. The family lived in one of the towers in Berlin’s Gropiusstadt. This was a housing project designed by the modernist architect Walter Gropius. He was the founder of the famous Bauhaus School. This was a post-war housing complex designed along the lines and values of the Bauhaus. However other factors intervened. The erection of the Berlin Wall restricted the space for building which resulted in tall tower blocks. Apparently by the 1970s the complex was dominated by poor families with the resultant economic and social problems. As a background to this portrait the sense of that area was important.

I did notice one oddity in the Brochure, which suggested that Carmen’s ‘tropical world’ provided a counter-point to the ‘barren projects’;

. . . it suddenly seemed as if the conditions in these petty bourgeois living rooms could, in fact, be changed.

Everything about Ruth, her work, and her children, as indeed about the projects, suggested a working class environment. I suspect the reference to ‘petty bourgeois’ refers to the content of Carmen’s dreams of escape. 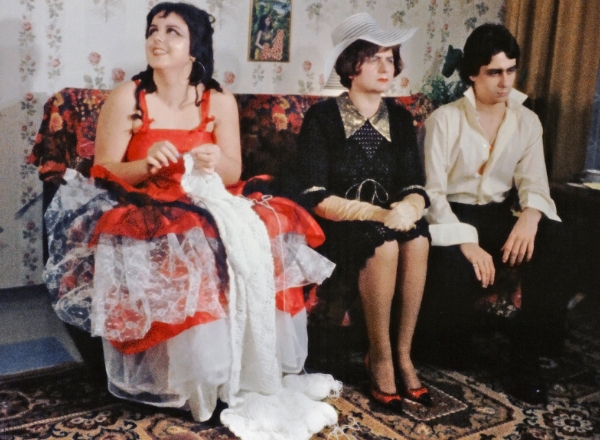 The film was also the object of a particular discussion in a seminar organised by Deutsche Kinemathek. ‘The Translation of Films’. This engaged with the

the translation of films into other languages . . .

including both the silent and sound eras. So,

director Elfi Mikesch. film restorer Julia Wallmüller, and translator Rebekah Smith will discuss the subtitles created for the 2018 digitally restored version [of this title] . . . A comparison of the new subtitles and the ones from the film’s release year demonstrate how standards and available methods have changed over the years . . . (Retrospective Brochure)

It was clear that the new subtitles offered a more accurate rendering of the German and also that they fitted into the editing of the film more effectively. Unfortunately there is no surviving material about the process of translation in 1978. But comparing clips demonstrated that the titling did not give complete rendering of the German. Rebekah and Julia made the point that modern digital methods enabled a higher degree of pinpoint accuracy in inserting these titles.

Elfi Mikesch made an interesting comment that she had felt that the 1978 subtitles made the film seem slower and longer. Unfortunately there was not an opportunity to explore this issue further. I had to leave for another screening but a friend advised me that the discussion only considered the issues around subtitles. So it seems there was no discussion of the translation from several languages into German; in that case German viewers heard not the original but a translator version; and English language viewers would be twice removed from the original lyrics of the songs and the words of the poetry.

So this is a complex issues that only in the last decade has become the subject of detailed research. The film was interesting in its own right as an example of avant-garde cinema and with its portrait of a subjective take on a particular place and people in 1970s Germany. But as a ‘text’ it offered an object for exploring the medium of cinema.