I booked to see this film simply because it seemed the best choice in the particular slot in the festival programme. I’m not sure why Glasgow selected the film which was released widely in the UK just three days after its two festival screenings. Perhaps it was a purely commercial decision – it was a sell-out on the night for a screening that must have been a première (I don’t tend to notice these things). I wonder if the distributors Fox Searchlight lost faith in the film and avoided a big London opening? Anyway, there was a festival flavour to the screening with the presence of director James Kent and one of the producers (Jack Arbuthnot I think, but apologies because I missed his name) and the Q&A that followed was enjoyable and interesting in terms of audience feedback.

The narrative explores a period of a few months from October 1946 during the British military mission in Hamburg, a city almost totally destroyed by Allied bombing earlier in the war. Colonel Lewis Morgan (Jason Clarke) is in charge of the clear-up in the city with the unearthing of corpses buried in the rubble and small groups of Nazis still creating disorder and launching attacks on British personnel. Rachael Morgan (Keira Knightley) arrives to join her husband and the couple are assigned a requisitioned country house on the outskirts which is undamaged. The house belongs to an architect, Stefan Lubert (Alexander Skarsgård), who is a widower with a teenage daughter, Freda. The Luberts and the servants are to stay on but at first Rachael finds it difficult to have them in the house and they retreat to rooms in the attic spaces. We sense that a form of romantic melodrama is about to play out since Lewis is overworked and out much of the time while Rachael has time on her hands to think about the loss of her son two or three years earlier in a bombing raid. Herr Lubert lost his wife during the firestorm created by British incendiaries around the same time. 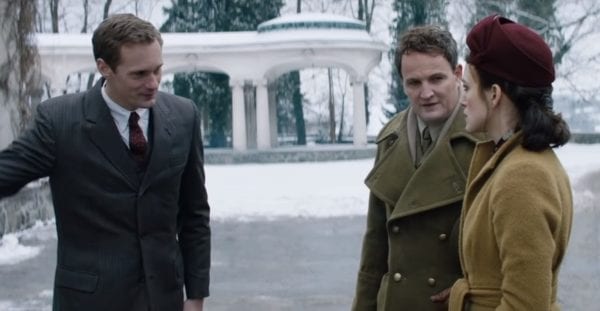 The situation is based on the real events experienced by the novelist Rhidian Brook’s grandparents. There is an interesting account of this history on the BBC website. A script by Brook was originally commissioned by Scott Free (Ridley Scott, who is credited as a producer on the film, was a 10 year-old with his parents in Hamburg a year later) which Brook then turned into a novel. The film took shape after the novel’s publication and two new writers were brought in to develop the romance and in doing so to move further away from the ‘real’ events. Much of the film was shot in the Czech Republic and the film is very much a European co-production with important German involvement through producer Malte Grunert.

Since the film has now been given a wide release in the UK, it has been widely reviewed and I’m not going to use my space here to repeat many of the comments. Most reviewers come to the same conclusion – that despite the potential of the situation and the characters’ interaction, the film doesn’t really generate the emotion that might be expected. I’m afraid I have to agree. The word that kept coming into my head when watching it was ‘bloodless’ which seems strange for a drama set in the rubble, but there you are. This doesn’t mean it’s a ‘bad film’. It’s well-made, possibly too well-made with the costumes and the decor of the house sometimes overwhelming the tensions of the living arrangements. The three leads all give good performances and I was impressed by Jason Clarke in particular. I kept wondering where I’d seen him before (he has made several big budget American films) and it wasn’t until later that I realised it was in Rabbit-Proof Fence (Australia 2002). Few would recognise him as coming from Queensland in this role.

Glasgow Film Festival programmed the film as part of the ‘Local Heroes’ strand – celebrating Scottish contributions to cinema. James Kent told us that he had family connections in Paisley and was glad to be in Glasgow, but I presume that the only Scottish contribution came via fourth-billed Martin Compston who plays an intelligence officer, a hard and hard-drinking man. Not Compston’s finest moment I feel. The character didn’t work for me and I’m usually a big admirer.

This Russian poster (also used for Asian territories) suggests a wartime romance familiar in those territories?

The Q&A that followed was in some ways more interesting for me that the film itself. On the whole, the people who stayed for the session (the majority of the audience, I think) appeared to have enjoyed themselves. A couple of Germans in the audience commented favourably on the representation of Germans in the film and others said how interesting it was to focus on this period. It’s easy to forget that for most people under 60(?) this is not a history that will be familiar. One questioner asked about the balance between the romance and the historical/political back story. James Kent admitted that the production team had discussed this and opted for the romance. The questioner said they would have liked more ‘history’. Kent replied that some audiences might be ‘bored’ by the history. So there we have it. Actually, a bit more history might have created a bit more drama. As it is the history sub-plot (involving the daughter and a young Nazi ‘guerilla’) doesn’t quite work as well as it might. This was an educated audience and someone mentioned Lore (Germany-Australia-UK 2012) as a film set in the same period. Kent agreed and suggested Land of Mine (Denmark-Germany 2015) on which Malte Grunert was a producer. I refrained from asking whether the production team had looked at German ‘rubble films’ (Trümmerfilme) both from the late 1940s and at various times since. These were mostly set in Berlin, I think, but they might have informed a film set in Hamburg.

I think James Kent was probably considered a ‘safe’ choice to direct the film and in the sense that he has made several major TV films and series as well as the adaptation of Vera Brittain’s Testament to Youth in 2014, that’s probably a reasonable judgement by Fox Searchlight in funding the film. As one of the American reviews suggests, the film will work well on rainy afternoons as a TV or cinema matinée, but it could have been much more. On the other hand, audiences may prove that to be too conservative a view and if the film introduces just a little history alongside the costumes and the tasteful sex scenes that might be a good thing.