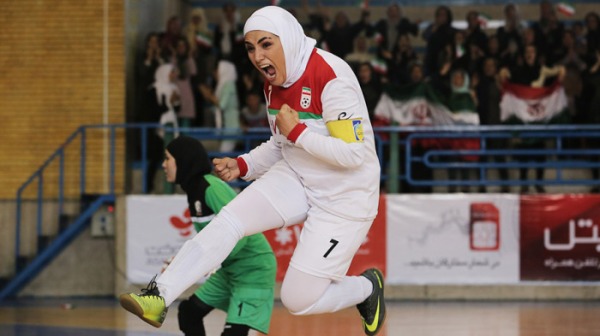 Afrooz celebrates after scoring a goal

This Iranian film features a couple of ideas that will be familiar to fans of global cinema. Firstly it constructs a narrative about the attempts of patriarchy to restrain women’s rights to engage with and enjoy football, as in Jafar Panahi’s Offside (2006). Secondly, it plays out a court procedure with the camera trained on a warring married couple while keeping the judge offscreen. Although the framings and composition are different this scene resembles the well-known one at the beginning of Asgar Farhadi’s A Separation (2011).

The team, led by Afrooz, arrive at the airport

The sport in the film is actually futsal, an indoor football game played by by both men and women with five players per side. Since 1999 Iran have won all but three Asian Women’s Futsal Championships. They have also reached the last four of the Fifa World Championship. The game is very important for female athletes in Iran and the focus in the film is on the national team’s (fictitious) captain and main goalscorer Afrooz (Baran Kosari). When the team travels to the airport to fly to Malaysia for the Asian Championships, Afrooz is stopped  by passport control and told that she cannot leave the country because her husband has not given his permission (which presumably he has in the past since Afrooz is the team’s top player). 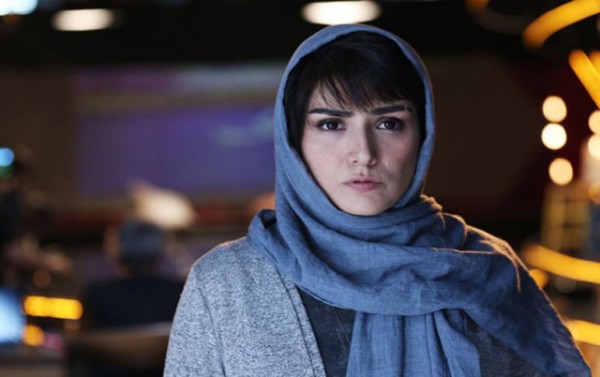 The highly-experienced Baran Kosari gives a strong performance as Afrooz

Afrooz tries to contact her husband Yasser, a daytime TV host. But the couple haven’t lived together for some time and in fact Afrooz is living with another team member Panatea in a flat also owned by her husband. Yasser (Amir Jadidi) does everything he can to prevent Afrooz leaving, including physical harassment. The legal conundrum is that Afrooz must either get his permission to travel or obtain a divorce, which seems very difficult in the couple of days before the games begin.

I won’t spoil the narrative of a film by detailing the plot since the film should appear in the UK at some point. The legal issue is quite complex as is often the case in Iran. I’m not sure how constitutional law works in Iran but in most of the films I’ve seen the judiciary seem thorough and fair. It’s the laws themselves that are restrictive. The husband is an extremely annoying character. He’s egotistical, forever preening himself and simpering on TV. Afrooz herself is strong and decisive but also quick to anger (a team captain in the Roy Keane mould). She has every right to be angry since she also has to contend with the woman she has hired as a lawyer who seems more interested in making the case into a media event and the woman who is in effect the team manager and chaperone and who acts as the link to the National Federation. Apart from Panatea, will the rest of the women on the team support her? 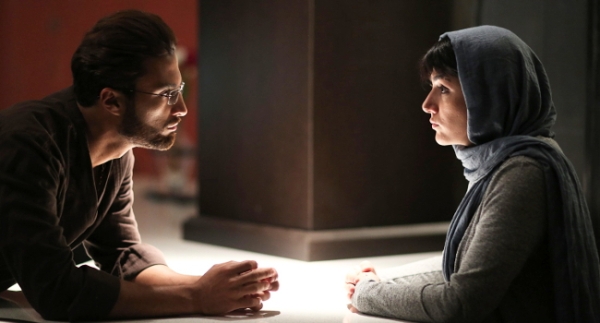 A short sequence of a game shown in the early part of the film gives a good representation of the passion of both the players and the fans but I wonder if the struggle by Afrooz to assert her rights is equally well-handled? The trick that Panahi and Farhadi employ so well in these kinds of narratives is to find the humanism in the situation as well as the humour, anger, pathos, frustration and commitment. Writer-director Soheil Beiraghi has got the basis of a good story here (based on real events) but perhaps the script could be developed a little more? Having said that, it is only his second feature as a director and he does create emotional scenes fitting for a melodrama, using close-ups and lighting to show the effect on Afrooz. The film has been generally well-received at festivals and some critics have been very impressed. It’s certainly well worth looking for.

The Glasgow programme listed the film with the title Permission, which seems to be how it has been released in France (as La Permission) but in the US it seems to be Cold Sweat. It would be good to get this sorted if it comes out in the UK. The programme lists the print source as Peccadillo Pictures in the UK, but it hasn’t appeared on that company’s website as yet. Here’s the French trailer: