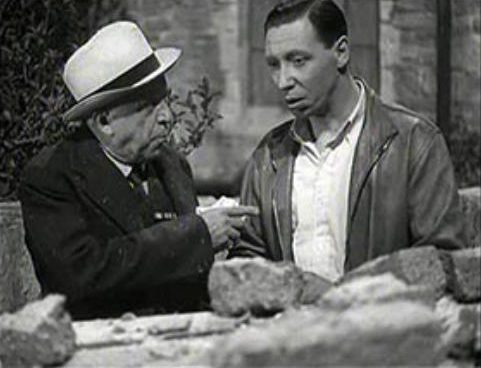 George Formby was the top box office star in the UK every year between 1938 and 1944 – an unequalled achievement and, I was surprised to see, Get Cracking stood up very well to viewing beyond nostalgia. The plots of his films were mere vehicles for Formby’s brand of gormless humour where it always ‘turns out nice again’ – his catchphrase. In fact he starts Get Cracking with it, a testimony to how well known he’d become. It’s no stretch to say that Get Cracking has avant garde elements with several minutes at the start featuring a voiceover that, he says, is reading the script and has a conversation with George.

Formby, and massive ’30s star Gracie Fields, both had working class backgrounds and were from Lancashire. No doubt they were seen as fresh in comparison with the Received Pronunciation that infected much of British cinema at the time. There are plenty of regional accents on show though George’s love interest, played by Dinah Sheridan, has unnerving cut glass pronunciation.

Much of the humour, derived from Music Hall, consists of slapstick and daft line, that never fail to tickle me, delivered absolutely straight:

“He has to be on guard on Thursday to stop the Germans if they invade.”
‘What! On his own?”
“No there’ll be six of us.”

Irene Handl (uncredited) is great as a character that’s even more dim than George. The sexual politics of the film isn’t too bad: Vera Frances, a child actor who made her last film in 1948 and is still with us, plays a teenage Cockney evacuee who works in George’s garage and she’s one of the brightest characters in the film.

No doubt people needed cheering up in 1943; as we still do in the UK now.