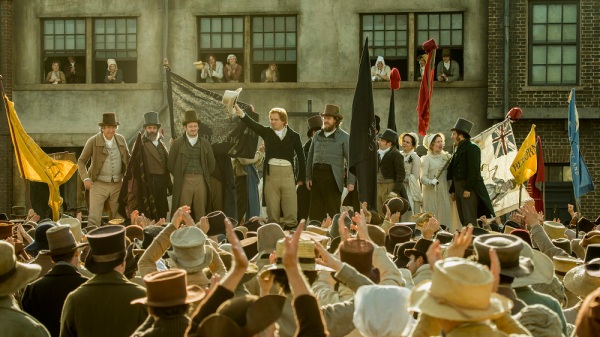 Mike Leigh was quite right to say that the Peterloo massacre should be taught in schools and he should be credited with bringing it to the screen; however it would have been better with a different writer and director. Leigh allows the film to be carried, up to the massacre, by speeches made by reformers. In the way of middle class Victorians, who never used one word if they could squeeze in ten, there’s a lot of rhetoric. This does give a sense of authenticity, Leigh made his name with ‘realist’ portrayals of the working class, but it also induces extreme torpor in the spectator.

Worse, Leigh’s weakness for caricature, which always marred his representations of the working class for me, leads to distracting characters such as Tim McInnerny’s Prince Regent. Caricature is used for humorous satire and whilst I don’t doubt that the Prince was a buffoon his words are sufficient to damn him; his presentation as a preening peacock is distracting and Ian Mercer’s Dr. Joseph Healey is straight out of the Leigh’s catalogue of the ridiculous grotesque. Worse, to ensure we understand the Salford Yeomanry were drunk before they commenced to slaughter the demonstrators, we are shown them toasting by flinging their beer into the air three times. Apart from the fact that I doubt Northerners would waste their ale in such a way, it has the impact of a sledgehammer entirely unnecessary for the narrative point. Sure, melodrama is about exaggeration and excess but this was plain stupid.

In addition, just as the slaughter is about to commence, Maxine Peake’s character complains she can’t hear the speaker. Fair enough, but the way it is shot evokes Monty Python’s The Life of Brian (UK, 1979) (‘blessed are the cheesemakers’); to introduce farce at this moment was farcical.

There’s more: Leigh cannot direct an action sequence, a large failing at the climax. His constant use of long lens, which foreshortens the perspective and fails to give a convincing sense of space, and placing his camera in ways that seemed to be chosen as the most convenient position (rather than an expressive position) serve only to sow confusion in the audience. It’s not giving a sense of the characters’ confusion and then panic so the horrendous slaughter fails to emotionally engage, a shocking failing when portraying a disgraceful moment in British history.

Dick Pope’s cinematography and Suzie Davies’ production design are good; as are most of the performers. But the result is a massive wasted opportunity to educate in an engaging way a shameful event. Of course the ruling classes don’t slaughter the poor with weapons any more but repress, with sometimes fatal consequences, through institutional means such as Universal Credit. We’re left with a film that will ensure no one makes one about the Peterloo massacre for many years to come and it would have been better if Mike Leigh had never made it.