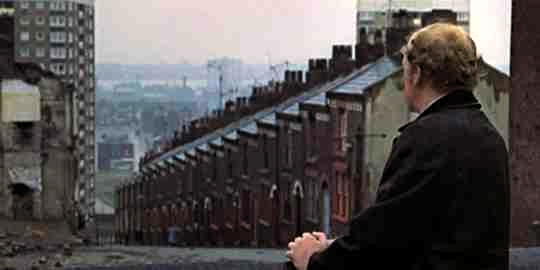 With John McGrath writing the script you can be pretty confident there will be a sensible political message and this thriller (well, generically it’s not quite clear, but thriller might be the best category) is both of its time and about a system that is still with us.

At the start, where Nicol Williamson’s protagonist (Marler) is having ‘rough sex’ with his wife to be followed by aggressive driving of his Jaguar, I thought we were in a gangster film. It has a similar look to the concurrent Performance (UK) and shares the time’s love of exaggerated zoom shots; both had major studio backing: Columbia and Warner Bros. respectively. However, it soon becomes clear he’s a go-getting executive (not so different from a gangster really). However, he has to return to his roots, a Liverpool that still has pre-war housing and bomb sites, as his father’s ill.

Unsurprisingly, for he’s been living in Virginia Water in a massive detached house, he finds Liverpool’s anti-establishment ethos gives him perspective. On his return south he gatecrashes his wife’s dinner party (it is in his own house), drunk, and tells the pinstriped tossers what he thinks of them. The class tensions remind us that although the 1960s were more egalitarian than the decades before, as McGrath makes clear, the ‘old order’ is still in charge.

Apart from the distracting zooms, Jack Gold‘s direction is confident. He shoots crowd scenes well and there’s a great moment at a wrestling match where the contestants suddenly realise that the audience has erupted into a riot. They stand together bemused, watching the mayhem. McGrath was born in Birkenhead which vouches for the authenticity of this portrayal of Liverpool.

Williamson’s career was ended by drink but he’s a formidable presence in the film, even if it is difficult to understand why he has such a ‘way with women’ (the misogynistic tones are of its time). Rachel Roberts is great as a ‘good time’ mother who clearheadedly knows what she wants and what she can get.

Apparently McGrath suggested that his script prefigured Thatcherism and it’s true that the ruthless corporate culture is still with us, evidenced by the CEO of Bet365 paying herself £217m in 2017.