In the Aisles is a German comedy-drama. Nick didn’t like it all but I found it very satisfying and several others I spoke to after the screening said it was excellent. However, I can see how it may appeal differently to different audiences. Reading some of the reviews after its appearance in official competition at Berlin at the start of the year, I can see that many reviewers have a different reading to me. Perhaps it’s because I’m always looking for the setting and social context of films. Some reviews refer to a ‘sweet romance’ but though that is an element it certainly doesn’t define the film. My favourite shot in the film is a large tank full of carp (a popular Christmas dish in parts of Eastern Europe) in a dingy section of the store. One attempts a futile leap to escape.

The film opens in the nighttime setting of a large supermarket – Lidl on steroids. Our focus is on the stockmen – and women – who are mainly forklift operators  moving pallets from the warehouse to the shelves in the supermarket. The credit sequence sees forklifts sailing gracefully down the aisles and almost dancing as they meet to the sound of ‘The Blue Danube’. The stately progress of the forklifts will make many think of Kubrick’s ship and space station in 2001. But the mood is broken by the introduction of a new worker, Christian (Franz Rogowski) who has been hired as an assistant for Bruno (Peter Kurth) in ‘Beverages’. Christian appears at first to be clumsy and impulsive, but almost mono-syllabic. We fear for him in a section where any mistake might mean broken glass and showers of beer. But Bruno turns out to be a good trainer and eventually Christian will pass his training and become a competent forklift operator. He will also become infatuated with Marion (Sandra Hülller) aka ‘Ms Sweets’ and gradually an attraction develops between them, though Marion gives no sign that it will develop further. These three characters are the focus of the narrative and each is given a section of the film named after them. Most of the action stays within the main supermarket building until Bruno, smoking a cigarette in the yard, begins to tell Christian something about himself and how the supermarket came to be built. From this point on, the narrative slowly begins to change, not least in exploring something of the world outside – primarily the homes of Christian, Marion and finally Bruno. 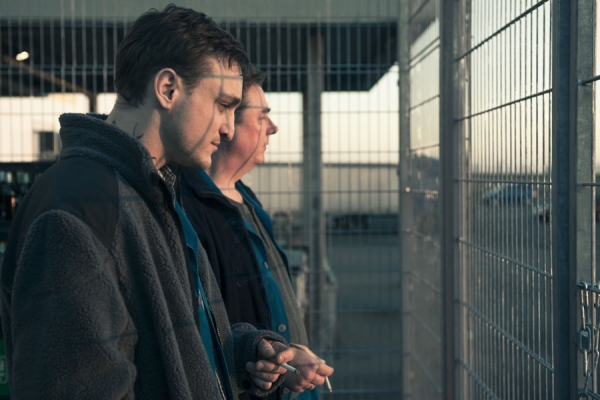 The supermarket was built on the site of an old trucking company – the company for which Bruno and several of the other workers in the supermarket once worked. Its location is close to a major autobahn route through what was the GDR or East Germany. This film is in many ways an ‘Eastern’ German production, with regional funders from the East and most of the main cast and crew, including co-writer and director Thomas Stuber and stars Sandra Hülller and Peter Kurth. Bruno refers specifically to ‘re-unification’ and the assumption is that the trucking company closed and the supermarket opened as a result at some later date after the formal process of re-unifying the country in 1990. Bruno loved being a truck driver and the camaraderie he experienced. Some of that sense of collective responsibility survived the transfer to the supermarket and we see it still in operation at the Christmas Party. But now Bruno is getting towards retirement. Marion would have been a child – young teenager in 1990 but she is still possibly affected by memories of the East. Christian is younger. He made mistakes as a teenager but now he sees that he has a second chance. I’m not going to spoil what happens but my reading is that the way the three central characters deal with the enclosed world of the supermarket is some kind of metaphor for how German workers have come to terms or not with capitalism in the 21st century. This ties in to some extent with the concerns of other German directors such as Christian Petzold and I note that Franz Rogowski also appeared at Berlin this year in Petzold’s Transit (Germany 2018). I may be completely wrong in this but that’s how I see it.

A stately glide down the aisles . . .

The film is a comedy-drama but the comedy comes from observation of the many nuances of the inter-relationships of the workers. The sense of observing is enhanced by camera position and framing and occasional overhead shots. The camerawork (by Peter Matjasko) employs shallow focus fields so that much of the image is slightly out of focus when we see the central characters. I assume that this is intended to convey the sense of being enclosed and having a limited perspective on events outside. The fantasy of ‘outside’ is also conveyed (as in many similar films) by the large photograph of a tropical beach which covers the wall of the small room with a coffee machine where Christian and Marion meet briefly (see the first image). Nick might not have enjoyed the film but he was better than me in spotting the subtle uses of sound, including the reference to the ‘sounds of the ocean’ inside the warehouse which are eventually revealed (by Marion) to be made by the forklift. I enjoyed the use of music throughout the film in a score that includes classical and ‘roots’ music.

The only outright comic moment is, fittingly, included in the sequence dealing with forklift training and if you’ve ever had to endure po-faced Health and Safety training you’ll probably find it very funny. I did. But truth to be told, there aren’t too many laughs in a film that moves slowly through its 125 mins. But I never felt that there was a wasted minute and I’m glad I spent the time with Christian, Marion and Bruno. This is a pretty good trailer: