[This review does discuss the film’s events in some detail, including its conclusion.]

Agnès Varda’s latest film, Visages, villages (2017), is a collaboration with the artist-photographer, JR. It brings to life again the cinema she has described herself as a ‘cinéma d’auteur-témoin’, an ambiguous phrase which can be loosely translated as the ‘cinema of the author-as-witness.’ Varda discussed how she felt uncomfortable with the word, ‘auteur’, presumably recognising its cultural resonances in relation to the figure of the filmmaker filtered through the French New Wave critics’ imagination; a person who authors the text and controls a vision, through images and sound.

One of Varda’s auteurist traits has been a control of bringing other voices into her films and a deep empathy for her subjects. Her films have been consistently celebrated as they represent a different, more apparently inclusive form of cinema.  She came to a much wider audience with Les glaneurs et la glaneuse (2000) an odyssey through the French countryside and cities sharing and witnessing as to the activity of gleaning from the waste that others throw away. The heart-shaped potato became a powerful symbol from that film, representing the mountains of allegedly misshapen potatoes that the supermarket buyers leave behind as too unappealing to go on their shelves. Varda, through her technique of juxtaposition effects, in Mireille Rosello’s words, a ‘surrealist encounter between the word heart and the dull potato’, creating a new set of associations. The abandoned potatoes are a metaphor for the people that she meets that somehow sit outside of society or are ‘misshapen’ in terms of normal ways of living.  As with her potato art installation (Figure 2), she gives them space within her film to tell their stories, to show their accomplishments and creativity and to interact with Varda who happily stages these encounters so that they are entertaining and often very moving. Varda understands that what she is doing should appear effortless, almost ‘throw-away’ in its own technique; however, her work is tightly constructed as a piece of performance art. The little old lady she has played in her later documentaries has created a receptive context for drawing performances out of her contributors.

Later in the film, Varda films her own ageing skin (then at seventy-eight years old) and comments on the ‘horror’ of this process. Her wish to acknowledge her ageing is present in her trademark two-tone hair colour.  Varda’s deep empathy and understanding shown by her interviews and revelations generated many personal letters by return, where audiences sent her stories and images based on the heart-shaped potatoes. It was acknowledgement of how many of us feel we may really fit that allegedly marginal, misshapen category. 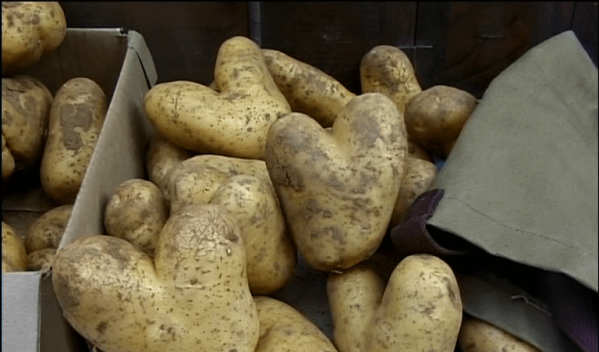 Similar in its structure, Visages, villages (Faces, Places (2017)) moves into slightly different territory through a collaboration with fellow artist, JR.  At ninety years old, one might presume that Varda was bringing in a companion to take away some of the burden of artistic control. In fact, this is another development of her ‘cinema d’auteur-témoin’ and a vibrant intellectual interaction between them through the film. The project arose out of the sympathetic strands of their individual projects between the young photographer-artist and the nonagenarian. JR undertakes his own kinds of odyssey in his work, making poster portraits of ordinary people in his travelling photo studio. These images are then placed on structures that relate to the subjects and their experiences. The French title, Visages, Villages indicates their plan to visit only villages on the trip (and also recalls Varda’s consistent love of rhythm and rhyme in her writing for the cinema, especially her voiceovers). The film foregrounds another series of moving testimonies, such as the image of the last inhabitant still in place in the mining village (Figure 1 above), the image of the women who work closely with their husbands at the dockyard or the face of Varda’s early model and friend, Guy Bourdin, who himself went on to be a photographer.

Varda and JR’s relationship is staged onscreen, but there is an affecting conviviality and mutual respect, often indicated by the insults directed towards each other. They joust pleasantly over a running joke about JR removing his glasses. This, as is pointed out, triggers a memory for Varda of filmmaker Jean-Luc Godard’s propensity never to remove his glasses. Godard was a close associate of hers as part of the French New Wave, introduced to her by Jacques Demy, Varda’s future husband at the time. She has described Godard as the ‘chercheur‘, the seeker, a word she repeats on camera here and as containing a genius situated in his deep silence, a stillness that keeps him separate from others. Varda managed to persuade Godard to reveal his ‘sad eyes’, for a short film she made, Les Fiancés de Pont Macdonald (1961). It is the film that Cléo/Florence (Corinne Marchand)) and her friend, Dorothée (Dorothée Blanck) watch together through the projectionist’s window at the cinema during their Parisian car jaunt in Cléo de 5 à 7 (1962).

Travelling marks many of Varda’s films. Her early films reflected her travels, after leaving home as a young women, to the south coast of France. Varda mended nets with fishermen and lived amongst them; her first feature, La Pointe-Courte (1955) records the rhythm of the lives of fishermen and their families in Sète (alongside a more surreal narrative). Varda, living in Paris, pursued topics in and among her neighbours, including L’opéra-Mouffe (1958), Daguerréotypes (1976), Ulysse (1982) and Jane B. par Agnès V. (1988). Varda went with Demy to Los Angeles at the end of the 1960s, as part of joint explorations with Hollywood studios, where she made the essay film, Oncle Yanco (1967) and the surrealist, erotic fantasy Lions Love ( . . . and Lies) (1969).  She returned to L.A. in the early  1980s, and made the short fiction Documenteur (1981) and the essay film Mur Murs (1981). In both instances, there were failed negotiations regarding projects with the American studios.

Varda’s travels, therefore, have become an integral part of her biographical and artistic narrative, continued in her third age with her television series, Agnès de ci de là Varda (2011), where she travels to other countries and encounters other people, including other artists. (Other artists have long before featured in her work, including Ydessa Hendeles’ Teddy Bear Project in Ydessa, les ours et etc (2004). Each episode of this television series began with a short verse outlining the impetus for travel, being the pruning of the trees in her courtyard at Rue Daguerre, the home she has lived in for over sixty years. The title sequence joke runs that by the time they have returned, the tree need pruning again.

In the same way, Visages villages is concerned with movement in space and questions of time and memory (a preoccupation across Varda’s work). Going on the road with another artist enables her to extend the possibilities, creating a dynamic between two ‘auteur-témoin(s)’, both sharing a fascination with the lives of others. JR is a good match for Varda, both enjoying playing with ephemera and playing with whimsical commentary. Delving into people’s histories and working in temporary materials means that time as a subjective medium is very prevalent in the film. JR’s art installations are temporary posters which will only survive until the elements wash or wear them away. His creations are always destined to be destroyed by the weather. This is particularly brutal in the case of a recovered Varda photograph of Guy Bourdin, memorialised on a beach by JR.  Its complete disappearance by the next day reminds us how much these two artists are working with time and what passes – through travelling, gleaning and recycling. It becomes less about image being constructed and more about the new practice made by JR and Varda and their interplay in the moment of recreating the photo. All that remains is the photographic and filmed record of their work together and their group photograph at its completion.

Varda comments in Visages villages on the workings of the ‘mise-en-abyme’, which is appropriate to this and other moments in the film, when we are looking at the subjects inside or in front of the images of themselves (as in Figure 1). In some ways, it appears as if they are standing inside their own past selves. It is a trope very familiar in Varda because of her fascination with the passing of time and how we relate to our former selves. At the end of Les plages d’Agnès, she sits in her house on Rue Daguerre with her eighty brooms, delivered for her birthday by friends and neighbours. She comments at this point, the moment is already gone, as the filmed image recedes in upon itself (Figure 3).

The loose structure of Visages villages does disguise one underlying narrative, based on an echo of the past into the present, which is the movement towards visiting Godard created by his resemblance to JR. In the last scene, at Godard’s house in Switzerland, a planned visit is thwarted by the French New Wave legend’s unavailability. Godard appears to be playing against the role Varda has made up for him; he does not want to appear as part of someone else’s odyssey. He has written a message on his porch window, referring to his condolence note to Varda on the death of her husband, Jacques Demy. The note recalled happier times, dining together with Demy, placing a very personal note in the public space (window and film).

This moment could be part of the narrative construct; perhaps Varda anticipated he would not be willing to appear on camera. However, she is clearly deeply upset and takes several moments to verbally accept what Godard has done. Varda onscreen in her later films has been, in her playful words, the ‘little old lady’; however, one who has performed her unassuaged grief at Demy’s loss (in 1992), a grief she has turned into art to bear witness to an experience we all have had or will suffer. Les veuves de Noirmoitier (2006),

Other echoes in respect of Demy enter the current film. Varda filmed Demy, shortly before his death, during Les plages d’Agnès (2008), following the contours of his face and focussing on his eye.  Varda is gleaning parts of him, capturing them on film, before she loses him forever (Figure 4). Exhibiting these fragmented images in the film accentuates the loss, being all she has of Demy now.

Artistically, a new echo is created in Visages villages when JR photographs Varda in close-up, taking her eyes and her feet. He places these images on a train, so that she can continue her odyssey to places she cannot go to now she is the age she is.  However, this strikes a new emotional note. It is not a capturing or preserving of someone who is disappearing; instead, it affirms and celebrates his witnessing of her intellectual vigour. It sends Varda off, in virtual form, to continue to look and to travel and to create ‘surrealist encounters’, just like the one they have enjoyed together as artists. [SPOILER] JR’s removal of his glasses, brilliantly executed by the camerawork (having spoilt that part, I will avoid a further technical spoiler), is the perfect narrative conclusion as if devised from the start, having guessed at Godard’s unavailability. However, the warmth of their relationship, his obvious distress at her distress, makes the moment completely emotionally engaging as well as providing a satisfying conclusion. If Godard is to be known as a chercheur, then Varda deserves the sobriquet equally, still producing her intellectually demanding meditations on time, memory and our relationships to each other. JR knew he had to run – intellectually – just to keep up.

Ryder, K. (2016) ‘A Piercing View of the Twentieth Century, Through the Eyes of the Teddy Bear’, The New Yorker.