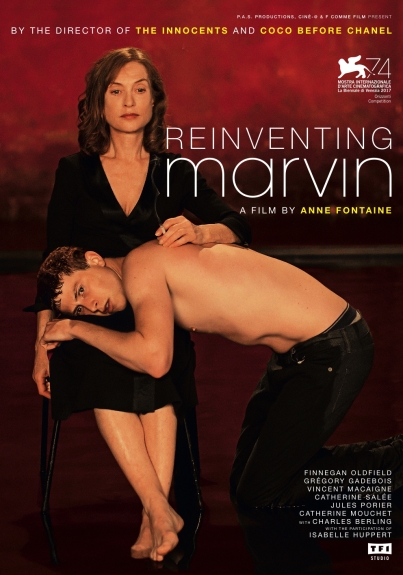 I watched this film with Nick and afterwards we disagreed in our readings of it. Screened in Picturehouses’ ‘Discover Tuesday’ slot, the film is available on VOD and DVD as well as occasional cinema screenings. I was drawn to an Anne Fontaine film as I’d enjoyed four films directed by her and especially the last two, Les innocentes and Gemma Bovery. Isabelle Huppert appears in the film but promoting her image as a major draw is somewhat misleading since she appears (as herself) in only a few, admittedly important, scenes towards the end of the film. The narrative is carried throughout by the two young actors playing the title character ‘Marvin Bijou’ – Jules Porier as Marvin the young teenager and Finnegan Oldfield as the grown-up Marvin, now a theatre student in his early twenties.

Jules Porier as Marvin with his father Dany (Grégory Gadebois)

Marvin bullied and abused at school

Marvin grows up in a rural working-class family in the Vosges region of North-East France with his parents, younger brother and older step-brother Gerald. Bullied and abused for his seemingly soft and girlish looks at school, Marvin struggles to understand his sexuality and identity. His family seems at first brutal and uncaring, displaying racism and homophobia. But one of the strengths of the film is that our understanding of his father Dany and mother Odile develops and they become more rounded characters as the narrative progresses. They don’t understand their son or what they might be doing to him but they love him and eventually they will support him. Marvin is spotted by his new middle-school principal Mme Clement (the impressive Catherine Mouchet) and encouraged to think about drama as a potential way out to the high school in Epinal and then eventually to theatre school in Paris. 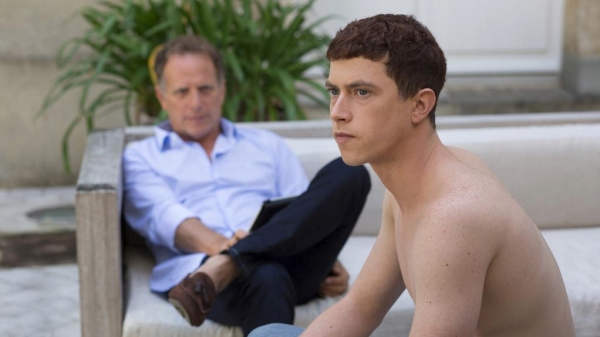 Anne Fontaine’s narrative structure offers a constant to and fro between Marvin’s time in middle school and his later time in Paris. The film begins with an almost abstract presentation of the performance that concludes Marvin’s transition to ‘Martin’, the hero of his own autobiographical play and now confident in his identity as a gay man. Fontaine, her co-writer Pierre Trividic and editor Annette Dutertre manage this with great fluidity. The film’s Press Notes reveal that Anne Fontaine had very clear ideas about how she wanted the film to look and she suggested that her cinematographer Yves Angelo look at the work of Bill Douglas on his celebrated trilogy of films about his formative years in a Scottish mining community (My Childhood, My Ain Folk and My Way Home (1972-8)). That’s a trilogy I don’t know well enough and I’m pleased to be reminded of it. Like the Bill Douglas films, Reinventing Martin is a kind of ‘social film’, but Anne Fontaine wanted to choose a different region in which to set her film from Northern France where the social realist tradition is strongest. 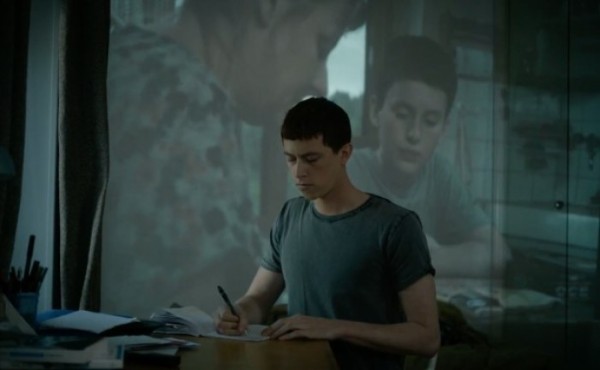 The film is shot in a 1.66:1 format.The other major feature of the visuals is the use of footage from Marvin’s childhood projected onto the walls and windows of Martin’s student room as he writes his story. I thought this worked well and it felt like a theatre device inserted into the aesthetics of the film that fitted this specific narrative. This was one aspect I disagreed about with Nick and another was the inclusion of Isabelle Huppert. I’ll let him explain his objection but, as far as I’m aware, Ms Huppert is keen to support young actors and independent productions and her presence fitted into the narrative for me. The other controversy raised by the film is not apparent from a screening. I learned from the Press Notes that Anne Fontaine was inspired by The End of Eddy, a book written by Édouard Louis, published in 2014.

I felt a very strong connection to the hero of the book by Edouard Louis, and I almost immediately felt like I wanted to make his story my own. I wanted to invent a new destiny for him. Explore the way he had to reconstruct himself after such a difficult separation from that family, and that subculture of France, socially and culturally disinherited. Dream up the crucial influences of his teenage years. In short, adapt it so liberally that ‘Marvin’ could no longer be considered an adaptation, though the book was powerful.

Édouard Louis is not credited (unless I missed it on screen) and I’m not sure if this is because he didn’t want his name associated with the film or because the conventions mean that there isn’t enough of his novel in the film for it to count as an adaptation. It seems odd, but at least Anne Fontaine is open about what she has done. (The book was a best-seller in France.)

I think this is a complex and absorbing film, even if the progression of events and some of the narrative devices might seem conventional – some comments suggest that it works like a fairytale. I was particularly taken by the two central performances. Jules Porier is a young actor with real presence and I thought it was a strong casting decision to match him with Finnegan Oldfield. Oldfield has the same striking presence and a distinctive way of moving and holding himself. Anne Fontaine notes: “I liked his indecisive relationship to femininity and virility, and the way he walks, almost like he’s levitating”. The cast overall is very strong.

Reinventing Marvin is a Peccadillo Pictures release in the UK. ‘Peccapics’ is arguably the distributor best known for LGBQT films in the UK and I hope the film finds the audience that might get the most from it. Having said that, the film should have an appeal to a much wider audience based on what is in many ways a universal story. I note that Anne Fontaine won the ‘Queer Lion’ at the Venice Film Festival.