L’apparition is a film with a UK cinema release by MUBI. No doubt it will eventually appear on MUBI’s streaming service. I’m surprised that the film did get a release in cinemas given the present hostile environment for foreign language films in the UK. It has several good points to recommend but at 137 minutes and relatively little ‘action’ it’s quite a difficult sell I would think. Some of the reviews have compared it with aspects of The Exorcist or a Dan Brown adaptation. I can see the connections but I’m not sure that they are helpful references.

The ‘apparition’ of the title refers to an event as understood by Roman Catholic ecclesiastical practice to involve a vision of the Virgin Mary – a ‘Marian apparition’. There have been many such events in history such as those of Saint Bernadette in the mid-19th century and more recently in Fatima, Garabandal and Medjugorje. At the beginning of the narrative the protagonist Jacques Mayano (Vincent Lindon) is returning from a journalistic assignment in the Middle-East (for the French newspaper with the largest circulation, Ouest-France), during which things have gone badly wrong with the death of his photographer partner. Jacques has PTSD and an injury affecting his hearing. He takes sick leave but is approached by the Vatican to become part of a ‘canonical investigation commission’ looking into this new apparition which has created considerable public interest in the French Alps. Jacques is an agnostic and his role is simply to ask questions of the young woman who has made the claim to have seen the Virgin. The remainder of the team will make observations based on their own specialisms.

After the opening scenes and Jacques’ summons to Rome, the next section of the film becomes ‘procedural’ as the newly-formed commission travels to the Alpine region of South East France where the site of the apparition seen by Anna Ferron (Galatéa Bellugi) has become ‘commercialised’ and a big attraction for pilgrims from around the world. 18 year-old Anna lives in a convent (where she operates a machine that blows the feathers into convent-branded duvets). She has two ‘protectors’ (beside the nuns). Her local priest has defied the Vatican to be her spiritual guide and there is a multi-lingual character who seems to represent a congregation in the US. He organises TV coverage of Anna’s appearances.

The film’s writer-director Xavier Giannoli had some success with his previous film Marguerite (France 2015) with Catherine Frot. In fact L’apparition is his seventh feature and several of his films have featured major French stars or well-known character actors. Giannoli wrote the film for Vincent Lindon and as one of the most reliable figures in French cinema he is expected to carry the whole film. Lindon often looks serious and sombre, as he does here. We trust him. We feel his pain. We also know there is an inner strength and the possibility that he could explode into violent action. But it is still a tall order to keep it going – and hold onto the audience – for over two hours without much support. That said, Galatéa Bellugi is always watchable as Anna. 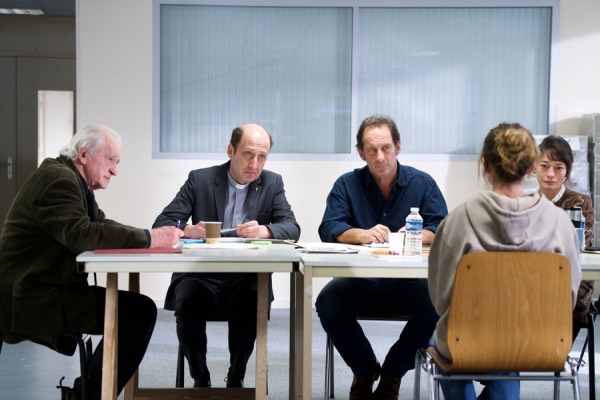 But is it interesting you ask? Well it might depend on your own religious/spiritual beliefs. Like Jacques, I’m an agnostic and once Jacques has performed his role as a disinterested interviewer I did wonder how the narrative would develop. It fairly soon turns into a familiar crime investigation – at least in terms of procedural conventions. Jacques meets Anna outside the formal proceedings, he visits the apparition site and tracks down Anna’s past. He even has a wall full of photographs and maps etc. in his room. As a journalist he wants to find the facts and he suspects that he hasn’t been offered the truth. I’m guessing that the concept of ‘truth’ is what Giannoli sees as the philosophical question. The Vatican and the other commission members follow practices that have their own internal logic about how claimed apparations and miracles should be evaluated. They are concerned to be seen to treat the claimants with compassion, but not to undermine the authority of the church. They have established criteria to use in a ‘canonical investigation’ so this is a carefully negotiated application of faith/belief and institutional values. It’s difficult for the rest of us to get engaged in this which is perhaps why we prefer the familiar excitement of Jacques’ investigation which tends to put human feelings at the top of the agenda. But perhaps this belief in journalistic investigation is just as constructed as the Vatican’s faith in its actions? In the Press Notes, Xavier Giannoli makes the point that:

. . . one should not imagine that the Church hopes for and encourages the authentication of apparitions. On the contrary, I think they are a hindrance to them . . . Faith doesn’t need proof or it’s no longer faith.

The ‘chase’ for Jacques and the fate of Anna and the tourist attraction that her vision has created involve the kind of narrative twists commonly found in crime fiction. There is also a coda in which Jacques finds a different kind of resolution, symbolically located in the desert. I was still with Jacques by the end of the narrative and I was moved by his relationship with Anna. I didn’t find the canonical investigation as interesting as I thought I might. There is a music score for the film in which Giannoli sees Arvö Part’s music which:

. . . doesn’t predispose you to accept the possibility of the supernatural. His music leaves room for silence, doubt, profound humanity and the poetry of doubt.

I’m afraid it didn’t do that for me or at least it did some of that but mainly seemed too relentlessly mournful. I’d have liked more of the visual expression offered by the feather-blowing machine. Overall, the presentation of the commercialisation of the apparition site and the pilgrimage industry is very good. In terms of religious belief it would be interesting to compare this film with Stations of the Cross (Germany 2014).