The square in Belgrade where the young man repeatedly ‘wakes’

Incarnation is the latest DVD release by Matchbox Films. It’s a first time effort by Filip Kovacevic, a 27 year-old maths graduate who also produced and co-wrote this low-budget film. The basic narrative concept he uses is the ‘time loop’, a familiar idea that can be applied to various generic narratives. The few reviews I’ve found of the film refer mainly to American films and to science fiction. That’s not surprising perhaps and many young filmmakers worldwide look to major Hollywood product for inspiration. I haven’t seen many of the American films reviewers reference (such as Looper quoted on the poster below) but Source Code is an interesting comparison, though the vast difference in budget and therefore lack of stars and effects pushes Incarnation in a different direction.

The basic premise is that a young man (played by Stojan Djordjevic) wakes up on a bench situated at a junction of five pedestrianised streets in the centre of what I assume is Belgrade. He doesn’t know who he is and he hasn’t made much progress in working out his situation before four men in black suits and white shirts wearing white face masks corner and shoot him. After a few seconds of blank screen, our hero wakes again on the same bench and the cycle is repeated. It takes a few more loops before our hero begins to make some progress, realising eventually, for instance, that there are five potential escape routes.

The film I was actually reminded of was Tom Tykwer’s Lola rennt (Run Lola, Run, Germany 1999). In that film, the cycle is only repeated three times and the ‘chase’ is about delivering a sum of money in time so Lola can save her fiancé. I was reminded perhaps by the running through the streets of Belgrade (instead of Berlin), but also by the sense that the film was like a videogame (much discussed in 1999) with the central character ‘learning’ each time and improving his/her chances of success. Much depends on the other characters on the street – and whether they are part of the same fictional world as the hero. In Incarnation, our hero does learn something from other characters, though never enough to fully understand what has happened – he’s going to have to work that out himself. The videogame references are strengthened by the clues the protagonist finds (which will perhaps take him to the ‘next level’) and by the pounding score for the chase sequences. I’ve no intention of spoiling the narrative pleasure in the film. All I’ll say is that the cycle is completed many times but that the film is relatively short for a feature. Some reviewers have not been satisfied by the ending but I thought it was quite appropriate.

It’s worth focusing on the film’s strengths. Belgrade looks an interesting city and it’s unusual to see a Serbian film in the UK outside a festival. With little money available, Kovacevic must have spent most of it on hunting for locations and then setting his cinematographer Uros Miltunovic loose to create some exciting chase sequences. There are a few scenes set away from the bench and the streets and these too work well. The choice of outfits for the mysterious hitmen also works very effectively. It’s a relief that though their look has been copied from various sources including the Matrix films, there are no special effects as such (apart from the fake blood for wounds!). The film has minimal dialogue and much of it is actually the young man voicing his own hopes and fears. In the UK trailer below the film appears to have been dubbed (the version I saw was subtitled) but I don’t think that’s much of a drawback in a film mainly focused on action.

You’ve seen it all before, so is it worth another go? I’d say yes, partly to enjoy the thrilling camerawork and also to see Belgrade. Stojan Djordjevic is an ‘everyman’ most audiences will be happy to follow. There is also the question of whether a Serbian take on this kind of familiar narrative offers something new. My thoughts certainly turned to that image of the Balkans as a very beautiful region (especially in the sunshine on the streets in a handsome city) which has experienced such terrible acts of violence as little as twenty years ago. Don’t worry, I haven’t given the ending away, but metaphor never seems far away in these kinds of narratives. Incarnation is certainly worth 80 minutes of your time and, who knows, perhaps an hour or two arguing about what it all means?

The DVD is released on 21st May. 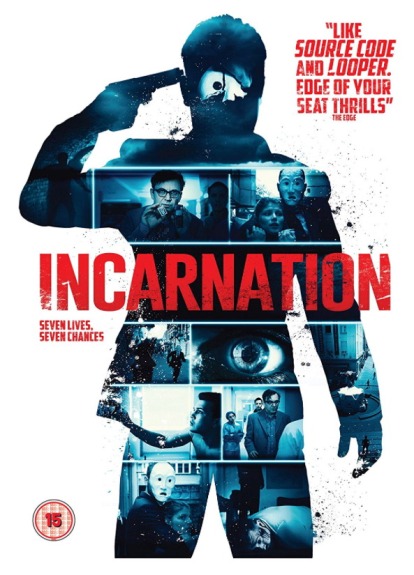