Alan Hunter introduced this screening in the midst of Glasgow’s ‘whiteout’ as a frivolous French comedy perfectly suited to the need to raise our spirits. He was right – it is a very silly film, but also at times very funny and it’s blessed by a performance at its centre by the great Rossy de Palma, everyone’s favourite supporting player in Almodóvar’s films, given a much bigger role.

How to describe the film? It’s a romantic comedy of sorts and also a fairytale, a ‘big house’ story with a tiny bit of social commentary/class consciousness – played as an ensemble piece. The set-up is a familiar ‘Americans in Paris’ story. Anne (Toni Collette) and Bob (Harvey Keitel) are a (supposedly) very wealthy couple spicing up their faltering marriage by taking over a grand house and gardens – somewhere still in the city but also exclusive. Anne has organised a dinner party for some distinguished guests but at the last moment her stepson, Steven (Tom Hughes) has turned up and invited himself. There are 13 for dinner and an extra guest must be found at the last moment. Anne decides to transform her maid Maria (Rossy de Palma) into a mysterious Spanish noblewoman – and instructs her to say little and be aloof. But a nervous Maria can’t disguise her real personality and she makes an unlikely conquest in the form of David (Michael Smiley), an art consultant who is there to attest to the provenance of a painting Bob wishes to sell. You can probably guess much of the rest of the plot of this riff on Cinderella. 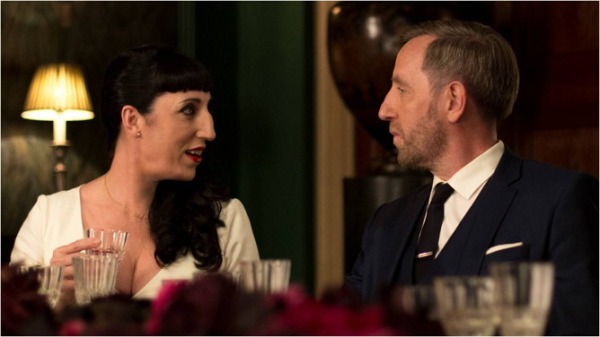 From the cast list, you will have worked out that this is one of those wholly French films that are made in English for the international market. Writer-director Amanda Sthers joins the likes of Luc Besson and Mathieu Kassovitz in this kind of production. Sthers (real name Amanda Queffélec-Maruani) is a celebrated novelist, playwright and screenwriter in France and this is her second directorial venture. Some of Luc Besson’s English-language films such as Lucy (France 2014) have succeeded and similarly, other EuropaCorp (Besson’s company) productions such as the Taken and Transporter franchises have made money despite poor reviews. These films explore universal genres that appeal directly to audiences. I feel that Madame, though mainstream and accessible, won’t have the same appeal and so far its critical reception has not been great. The film was presented by StudioCanal at GFF and I fear that it may suffer the fate of several other ‘popular’ French films in the UK. StudioCanal tends to open them on a few screens and then rush out a DVD a couple of weeks later. Part of the problem is that the ageing, and therefore shrinking, UK audience for French films will ignore this English-language romcom as being ‘too frivolous’ and the general audience will find the French context slightly too different to their usual Anglo-American fare. Having said that, I noticed that the film has done reasonable business (over $US400,000) in Australia. Is that because of Toni Collette?

If you’d like to read a sympathetic review, I recommend ‘Eye for Film‘. I enjoyed the early part of the film and I did find some scenes genuinely funny. I’m always happy to watch Rossy de Palma. The narrative does depend on a sense of class difference but I’m not sure how well that works. Michael Smiley is a fine actor but I wasn’t convinced that he was as upper middle-class as the narrative suggested and overall the narrative doesn’t seem to be able to sustain itself across 90 minutes and lost its way towards the end.