Pio with his young nephews in Ciambra

Ciambra is a small settlement in Calabria in Southern Italy (close to Gioia Tauro) with a large extended Roma family involved in various ‘marginal’ and ‘illegal’ activities. The youngest son in the family is 14 year-old Pio (Pio Amato). Not much older than his own nephews and nieces, Pio is conscious of needing to grow up quickly to be like his much older brother and to get away from the scrutiny of his mother, the matriarch of the family. This sounds like it will be a conventional coming-of-age story, but there is more to it than that. This isn’t a Mafia/Cammora/’Ndràngheta story. Ciambria is an isolated community – more like an isolated encampment than part of a city. Pio goes into the town or to other small communities but avoids mainstream criminals. The Roma boy is concerned about territories and identities. (The real Gioia Tauro is only a small town but it has been associated with ‘Ndràngheta and it has the largest container port in Italy.)

Writer-director Jonas Carpignano (born & schooled in New York, lives in Italy) made a big impression with his first feature Mediterranea (Italy 2015) about the problems of two African migrants coming to Italy. His reward was to be selected as one of the first to benefit from Martin Scorsese’s fund for younger filmmakers and a subsequent offer of support from Sundance. His starting point was to go for the ‘authenticity’ of non-professionals and the whole Roma family appear to be playing themselves if the credits are to be taken at face value. Fairly early on it becomes clear that Pio is not quite like the older members of the family – though he may be a throwback to his grandfather, the man who established the community in the area and who is still around at the start of the narrative. After the screening and after researching Mediterranea (which only got a DVD release in the UK and which I haven’t seen), I realised that Pio and his African friend Ayiva (Koudous Seihon) feature in both films, though whether as the same characters I’m not sure.

A Ciambra was screened in the Directors Fortnight at Cannes and was chosen as the Italian entrant for the Foreign Language Film Oscar so it has clearly made an impact. A good starting point might be to consider the extent to which the film refers back to neorealist studies of specific communities. Carpignano himself refers in this interview to his childhood memories of De Sica and Rossellini and the kids in their films. Jonathan Romney has referred to Visconti’s La terra trema (1948) because of that film’s similar focus on a tightly-knit community in Sicily. Many critics have tried to place the film in relation to that Italian tradition and more recent approaches. The Dardenne brothers post Rosetta (1999) is one touchstone but I’ve tended to see them as slightly removed from classic neorealism. Carpignano uses his non-professionals filmed on authentic locations and he inserts some traditional neorealist ‘lacks’ (problems) that need to be sorted. This mainly means finding sources of money from increasingly ambitious petty crimes to solve various problems faced by the extended family. Unfortunately, Pio’s education is in stealing credit cards and copper wire and trying to grow up to be like his brother. He has to get another young person to read the messages on his phone because he hasn’t had time to learn to read. There isn’t a great deal of plot but Pio’s ‘coming of age’ comes in a final sequence which I found very distressing. But as my viewing partner pointed out what we were offered is a reality in Italy. 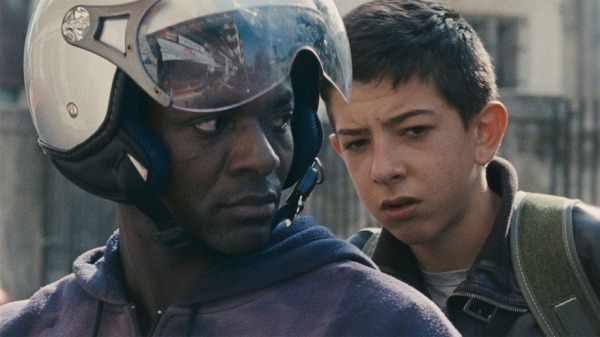 Jonas Carpignano has an Italian father and an African-American mother. This may be a reason why he began his feature film career with a story about African migrants and why in his second film he shows both the mixed race children in the Roma family and the African community in another small community that Pio is drawn towards by his friend Ayiva. The Africans are mainly from Nigeria and Ghana and they speak English as a common language, that is also used by Ayiva from Burkina Faso. The reality is that in the pecking order in Calabria, the Roma come below the Italians and the Africans are below the Roma. Neorealism can be developed as melodrama and this true to a certain extent in A Ciambra which has plenty of music on the soundtrack and a range of emotional relationships. But it also has its own element of ‘magic realism’ in the hallucinations that Pio experiences concerning his grandfather. I thought at first these came from heavy dope smoking – when Pio first sees the horse I thought of a similar moment in La haine (France 1995) when Vinz sees a cow in his housing estate. But then it occurred to me that the fantasies came because of the pressure suffered by Pio. There is a sense that Pio is his grandfather re-born and that he could rise above his misdeeds. I hope so. It’s very difficult not to warm to Pio as a character. He’s 14 years-old and frightened of travelling on a train – he’s not a gangster.

A Ciambria is photographed by Tim Curtin who also lensed Mediterranea and was in the camera unit on Beasts of the Southern Wild (US 2012), another film I haven’t seen. I mention it here because Jonas Carpignano was an assistant director on that film which also included in its crew the film editor and music composer of A Ciambra, Affonso Gonçalves and Dan Romer. I’m pleased to report that Peccadillo Pictures has picked up A Ciambra for a UK release in May. It’s well worth a watch. IFC/Sundance Selects released the film in the US in January: